New Delhi. Some of India's biggest fish are getting caught up in the country's fast-growing wave of anti-corruption activity. In what could be India's equivalent of a judicial jasmine revolution, previously invulnerable politicians, business icons, and pillars of the community are all nervously keeping their lawyers on speed-dial.

The anti-corruption push is an unprecedented coming together of myriad facets of Indian society. Religious leaders are concerned about the effects on morality and spiritual growth. NGOs speak of the effects on the poor. The middle class is angry about its future being stifled by a smothering blanket of day-to-day corruption. The intelligence services see corruption a clear threat to national security. And the business community, thanks to globalization, has seen how efficiently things can operate without having to constantly pay bribes or be tangled in red tape, and they want the same thing at home.

Even the Supreme Court is fed up, with Justice B. Sudarshan Reddy saying about the vast sums of Indian money being illegally hidden away in Liechtenstein Bank:

The scandals are bursting on to the front pages fast and thick. Suresh Kalmadi, a Congress Party politician and the former head of the corruption-plagued Commonwealth Games, was arrested April 25. According to a report by the Indian Comptroller and Auditor General, the 2G spectrum scam alone, in which 2G licenses were sold off in a manner that was, to say the least, less than transparent, cost close to $40 billion in lost revenue.

All across India, people are saying enough is enough. And suddenly the unthinkable is starting to happen. People considered above reproach, or at least untouchable, are coming under the judicial cross-hairs. 2G alone has seen charges laid against one former government minister and several captains of industry.

And the latest high profile target is one of the biggest fish of all, Congress Party President Sonia Gandhi, currently #9 on Forbes list of the World's Most Powerful People.

Sonia Gandhi has one of the most remarkable life stories in international politics. Born Edvige Antonia Albina Maino into a family of modest means in rural Italy, she didn't even get a chance to complete high school before heading to the UK for work. There she met Rajiv Gandhi, son of Indian Prime Minister Indira Gandhi. She eventually married him and the young family moved in to Indira Gandhi's New Delhi's home, putting her literally in the heart of Indian politics.

As she herself later said, she "could not walk past the portraits of my husband, my mother-in-law and her father and not feel that I had some responsibility to try and save the party they had given their lives to." 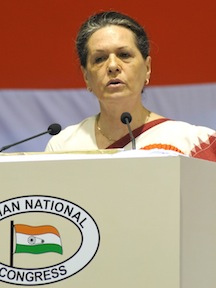 Given her focus on the party, it was fitting that instead of becoming Prime Minister, she ended up as President of the powerful Congress Party. Politically, it proved to be a smart move as it gave her power without direct responsibility -- while she is #9 on Forbes list of power people, the actual Prime Minister of India, Manmohan Singh, is only #18. According to Forbes, "Gandhi remains the real power behind the nuclear-tipped throne [...] she has cemented her status as true heiress to the Nehru-Gandhi political dynasty."

Her image is of a dutiful, submissive Indian wife, now widow. When her husband was alive, she would walk behind him. In public she wears saris. Although a devout Catholic, she is often photographed at Hindu Temples. And like a good Indian mother, though she has decorously pulled herself out of the race for Prime Minister, she is happy to encourage her son, Rahul, to take the job.

However there have been growing, persistent murmurs about questionable business deals and inexplicable exponential jumps in the personal wealth of her and her family.

The allegations came out in the open in 1995 when M. D. Nalapat, then Resident Editor (Delhi) of the world's largest English language newspaper, the Times of India, began a groundbreaking series of articles about Sonia.

The articles made the controversial (at the time) claim that the public docility was just a ploy, and that Sonia actually had serious political ambitions (later confirmed by her role in Congress). Also, crucially, the series said that her desire for power wasn't simply altruistic and that the wealth not only of her, but of her Italian relatives, rose stratospherically after Rajiv Gandhi became Prime Minister in 1984.

Nalapat's articles could not be ignored as he was one of India's most respected journalists and had, throughout his career, taken on corrupt politicians, social inequity and institutionalized discrimination.

This however was a 'topic too far'. While the facts in the article were never refuted, Nalapat was forced out of journalism in 1998 and moved into academics.

Next came public questions from another highly reputed source, Sten Lindstrom, Sweden's special prosecutor investigating the pay-offs associated with the sale of weapons by Bofors to the government of India. His investigation showed that a close friend of Sonia's, Ottavio Quattrocchi, has received kickbacks in the millions.

In 1998 Lindstrom gave an interview in which he said:

the Gandhis, particularly now Sonia, should explain how Quattrocchi-owned companies got such fat sums as payoffs from the Bofors deal. After all, what is the connection of Sonia and the Gandhi family to Quattrocchi? Who introduced Quattrocchi and his AE Services to Bofors? At least one thing is certainly known now. A part of the payoffs definitely went to Quattrocchi. [...] the papers all pointed to the Gandhi family.

Not only have the questions not been answered by Sonia, but in spite of substantial evidence against him, Quattrocchi has managed to evade prosecution in India, and has even had his kickback funds unfrozen from overseas accounts.

Part of the genius of Sonia Gandhi is her ability to present herself as a helpless victim, convincing even her political rivals not to fear her as she is fatally flawed. In 1998, India was being led by BJP Prime Minister Vajpayee. When Nalapat spoke with him about Sonia, he was bluntly told to lay off, as, "so long as a white Christian lady is head of the Congress Party, I [Vajpayee] and my party will always be in power". Vajpayee and his party lost power to Sonia's Congress in 2004.

But the most serious threat to Sonia -- and, as she is at the apex of the Congress Party, and so to Congress itself -- is now lying on the desk of #18, the Prime Minister of India.

On April 15, former Law and Justice Minister and Harvard Professor Dr. Subramanian Swamy asked Prime Minister Manmohan Singh for leave to lay corruption charges against Sonia Gandhi. In a meticulously researched 200+ page submission Dr Swamy alleges Sonia Gandhi has been involved in corruption in India since 1972 and personally benefited from the Bofors scam (1986), has held billions in non-Indian bank accounts since at least 1991, illegally profited from the Iraqi oil-for-food deals (2002), and even accessed KGB payoffs during the Cold War.

The Prime Minister has three months to decide whether or not to grant sanction to prosecute. If he doesn't, Dr. Swamy can take the case directly to the Supreme Court, which under Chief Justice Kapadia is showing a definite proclivity towards facilitating corruption cases.

While, so far, the corruption cases in India have caught up some pretty big fish, if charges are laid against Sonia Gandhi, it won't just be part of a wave, it will be a sea change.

Sonia Gandhi is not just an individual, she is the steely core of a pillar of Indian politics. If she crumbles, it will shake the foundations of the venerable Congress Party, and possibly leave a gaping hole in the political scene. Meanwhile, a range of polarizing and regional parties are ready to rush in and stake their claim. Given the growing importance of India in our heavily globalized world, this is not just an Indian story, this is one all should be following very closely indeed.