Huge hips may be the hot new body part, no ifs, ands or really big butts about it.

That's the prediction of Claudia Floraunce, 40, an aspiring actress and plus-size model who recently moved her 64-inch hips (and the rest of her body) to Los Angeles from her native Austria in hopes of becoming the next big sex symbol.

“I find my hips very sexy, in fact I find my whole body very sexy," Floraunce tells Barcroft TV. "I think people like looking at me because I’m a very unique size. I’m very large but I carry myself with a lot of confidence. I get a minimum 27 marriage proposals every day. To have curves is in and I’m in -- finally.”

Floraunce is hoping to thrust her huge hips into the forefront of fashion with the help of a new documentary, "World's Biggest Hips," that debuted Wednesday on the British TV network Channel 5.

The documentary profiles four women who feel blessed to be broad in the beam.

The one who gets the most hip hype is Mikel Ruffinelli, 39. Her backside measures 8 feet around, despite only having a 40-inch waist.

Ruffinelli's hips are so humongous that she has to turn sideways in her house to avoid getting stuck in corridors.

The inconvenience doesn't get Ruffinelli down, though.

"I have an extreme physique," Ruffinelli (pictured below) said, according to the Daily Mail. "I love my curves, I love my hips, I love my attributes. I love my shape and I see no reason to diet because I don’t have health problems. Men don’t fancy skinny girls, they like an hourglass figure." 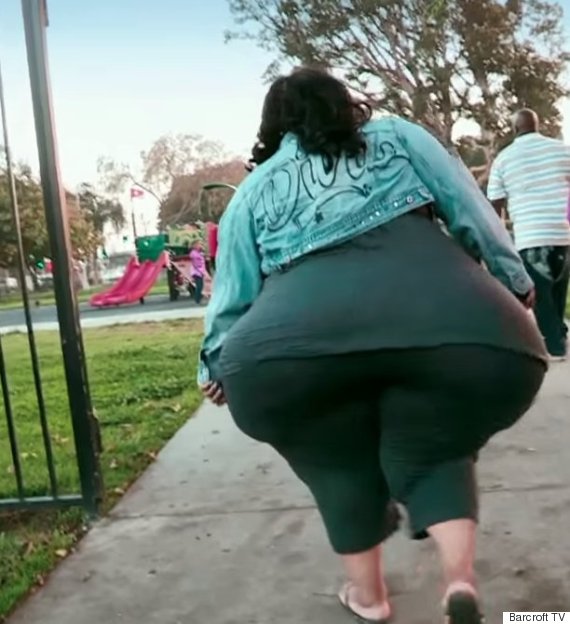 However, the demands of having huge hips can weigh heavy on a woman.

Although Souder loves the public attention she gets for her ample hips, her relationship with her husband, Steve, has had its ups-and-downs related directly to her weight gain.

Twelve years ago, when Souder's husband dumped her for a heavier woman when she decided to have weight loss surgery.

They rekindled their relationship a year ago, but Steve keeps trying to plump her up more. The extra pounds exacerbate her arthritic hips and knees and affect her mobility.

“I want her to be as fat as she can be but not be unhealthily fat, and there’s a fine line there. As you get older, it can become more problematic, so there’s part of me that feels guilty that I like it so much," Steve said, according to HuffPost UK.

"It’s something that as she gets older I struggle with because I feel bad about it, but I also like it. I feel conflicted sometimes, especially if she’s in a lot of pain or having a particularly hard day.”

Having huge hips might be hard at times, but it doesn't stop New Yorker Marlena Plummer. The 35-year-old has 83-inch hips but still swims and pole dances.

Plummer says she's been hippy since before she can remember, but doesn't know why.

“I always had hips even as an infant. I have a small appetite and it’s a mystery why my hips are the way they are but I love my hips, I love my shape and I love me," she said, according to the Mirror.