Before diving into any detailed analysis of government data, I usually hear the voice of one of my professors telling his favorite statistics joke. It went something like this, "Statisticians are brilliant people. They can analyze raw data, develop complex models, draw causal inferences and make bold projections of the future. They do this fearlessly, without concern for the minor issue that the data itself came from the fellow down the hall who wrote down whatever he felt like so he could get paid." Analyzing government data isn't quite as bad as that joke, but statisticians do need to be concerned about the danger of "garbage in garbage-out" in any work that do.

So how do these concerns about data quality relate to identifying the world's deadliest wealthy countries? It starts with the fact that the data for crime is notoriously fraught with quality issues. Criminologists use the phrase the "dark figure of crime" to describe the amount of crime that goes unreported or undetected. This "dark figure of crime" represents the gap between the true crime rate and the rate found in official reports.

Knowing that the "dark figure of crime" is so large, I decided to focus on homicide rates in this article. Why homicide? For starters, it is a critically important measure of crime since it is perhaps the most extreme of possible crimes, the taking of a life. More importantly, it is considered to be one of the more reliable crime statistics.

So which wealthy countries have the highest homicide rates? Of the 34 countries in the Organisation for Economic Co-operation and Development (OECD), the countries with the five highest homicide rates are, in order: Mexico (highest), Chile, Estonia, the United States and Turkey (fifth highest). Anyone looking at that list would likely call out the fact that these countries, while all being in the OECD, are not equally wealthy. In fact, the United States has a GDP per capita that is more than twice that of any of the other top four most deadly OECD countries. A simple scatterplot, where each data point represents a different country and the US is displayed prominently, gives a clearer picture of how America stands. The graph below shows that for the OECD countries, the US has one of the highest rates of GDP per capita (a rough, but commonly used metric of wealth). You will also quickly see that the US is a major outlier in the general observation that wealthier countries tend to have lower homicide rates. 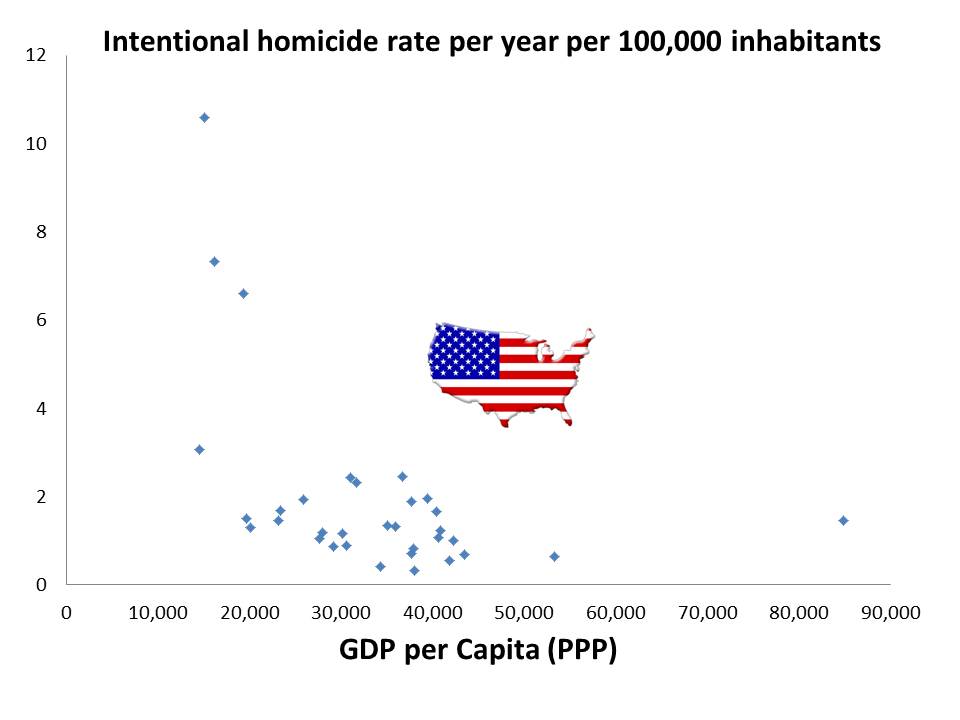 These thoughts about crime were summarized by friend from Australian who remarked, "I don't know why you Americans are so violent, but don't blame it on the Brits since Australia, New Zealand and Canada sure don't have your issues."