Philadelphia is not one of the world's great pizza cities. In America, the Italianate constellation of New York, Chicago, New Haven, Conn. and Providence, R.I. has long reigned at the top, and it could be argued that even Trenton, N.J. and Phoenix, the homes of giants DeLorenzo's and Pizzeria Bianco respectively, have bigger slices of the pie than Philadelphia. But the scene has been been growing in recent years; Pizzeria Stella and Barbuzzo have joined grande dame Taconnelli's as very respectable choices for slice fans. And Philadelphia will soon gain a big new weapon in the pizza wars: the world's first pizza museum.

When it opens late this spring in Philly neighborhood Fishtown, Pizza Brain will display 27-year-old Brian Dwyer's collection of pizza memorabilia, the Guinness recordholder for the biggest such collection in the world. It will also, appropriately enough, serve pizza.

Dwyer is a relative latecomer to pizza. It wasn't until college that he thought seriously about the possibilities of the pie. He sought out great pizza and casually started piecing together a collection of pizza-themed vinyl records to decorate his music studio.

His "eureka" moment came in May of 2010, when he and his friends decided to host a pizza-themed art show in Fishtown. He asked friends and acquaintances to create pizza-themed art across various media. When 300 people showed up on the opening night of "Give Pizza Chance," he realized that there was more potential in pizza-gallery crossover than he'd ever imagined.

He started to scour eBay and thrift stores for pizza-related magazines, comic books, vinyl records and strange items created by pizza chains. Word got out that he was collecting pizza memorabilia, and people -- friends and strangers alike -- began to send him their finds.

"When I started down this road, I said, I want to be able to display all this stuff in a pizzeria," he said. "And I thought at first that when we open, I'll make this funny bold claim that we had the biggest pizza memorabilia collection on the Eastern Seaboard, or maybe in America. As I started joking about that, my friend was like, 'Dude, you should see who actually has the biggest.' I assumed somebody had done this. So I did that: I typed in all sorts of search phrases into Google trying to find the biggest collection, and nothing came up. I was shocked. So I contacted Guinness, started going through all the regular channels, and got the record in July."

Only then, this past fall, did he come up with the idea of building the world's first pizza museum.

"It's really funny that no one's done this before. There are already museums dedicated to a bunch of other foods: mustard, ramen noodles," he said. "I guess the reason no one's opened a pizza museum before is that it's so obvious, so ubiquitous, that people don't think about it as the special thing that it is."

He started to renovate a 19th-century building in Fishtown with collaborators Ryan Anderson and Joe Hunter last April. He bought the building with the help of an investor, Michael Carter, in October, and now lives with his wife in the apartment on the second floor.

Renovations are ongoing, and there's still plenty of red tape in the way of the opening. Dwyer also hasn't yet raised enough money to build the museum; to that end, he posted a request for $15,000 on Kickstarter earlier this week. (He's raised almost $2800 in just three days.) Still, Dwyer says Pizza Brain could open as soon as May or June if all goes as planned.

In a few short months, then, you'll be able to call yourself a patron of the arts whenever you eat out for pizza in Fishtown.

Click through below to see a few photos of Dwyer and his Guinness Record-holding pizza memorabilia collection: 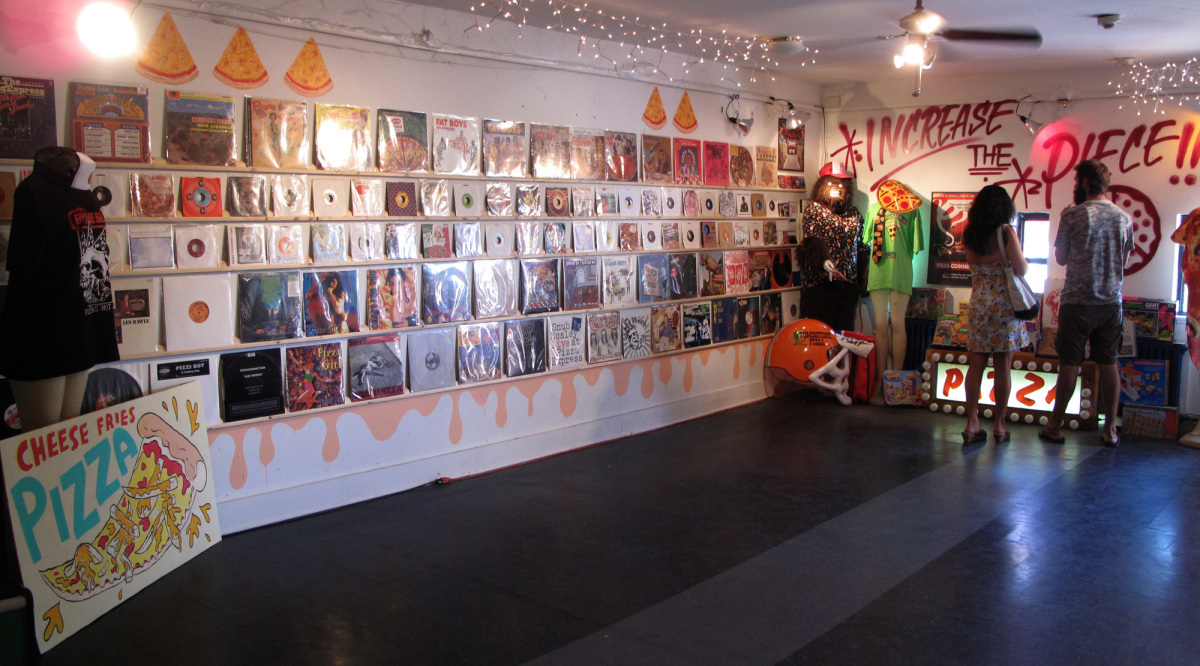 1 / 7
The Collection, Arrayed For The Guinness Record Auditors