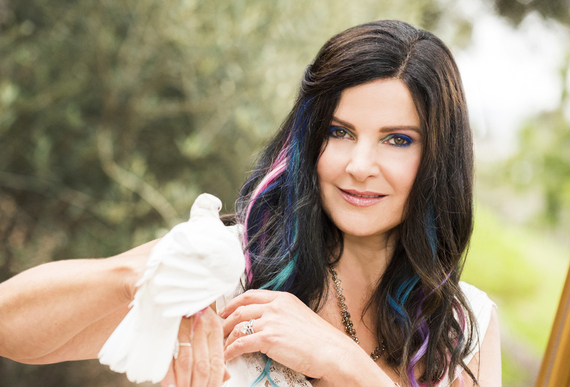 Concetta Antico of San Diego lives in a world only a small percentage of humanity can see -- she is a tetrachromat. Tetrachromats have a fourth, extra cone class for color vision and while normal people see one million colors, Ms. Antico and a small handful of other women like her identified through DNA testing so far can potentially see orders of magnitude more.

And fortunately for us -- she paints.

Her vivid oils -- all remarkably done in just one sitting -- are on display through Sept. 28 at the Women's Museum of California, Liberty Station, in a solo exhibit titled Beacons of Beauty: Capturing Earth on Canvas. Featuring swans and parrots and butterflies and flowers among other subjects, the canvases seem to burst with extra, vivid color as only she can depict. (Ms. Antico sees more color in nature than in manmade items, she explains.) 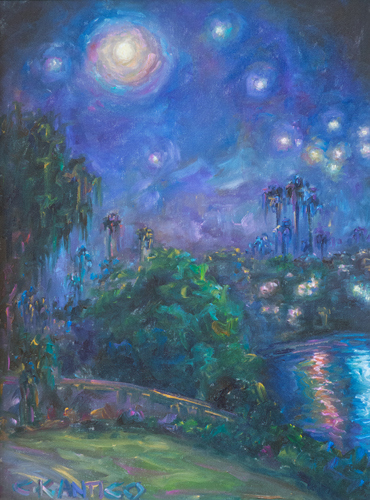 But can other people see the rarefied tones she mixes with great care on her palette? To a degree, she believes. "You could open up a closet and have 200 dresses hanging there. Everybody could see a little glimpse of those dresses, but if you actually took one and pulled it out and hung it over the door, they would see it. I find as a teacher of art, when I point things out, sometimes the students see it. But do they see it the same way as you or me? That I can't say."

As we talk on the phone, Ms. Antico is looking at a tree in her garden. While she's sure others would see the browns and grays of the bark -- would they also see the lavender she notices?

She says the speed of her compositions is an effort not to muddy the color, to create the purest, clearest and freshest representation of what she sees. 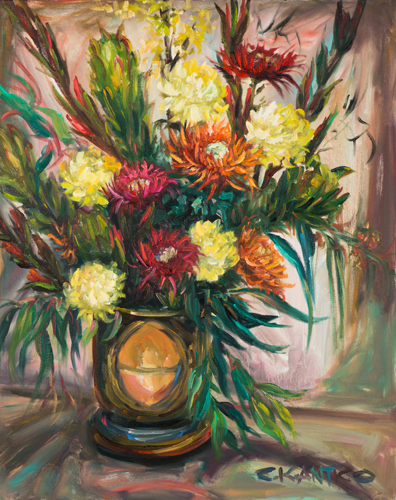 Dr. Kimberly Jameson of the University of California, Irvine and a team of researchers have published their research into Ms. Antico's gifts on their website and have called her case "the perfect storm" of conditions for the expression of the rare trait.

"In my personal opinion she has a confluence of factors in favor of her being a functional tetrachromat," Dr. Jameson says, at the same time pointing out that further testing must be done.

Ms. Antico's qualities include superior ability to multi-task, a high IQ and high energy level which only requires about four hours sleep per night, the artist explains. Perhaps the brain has as much to do with the expression of tetrachromacy as the genes for it.

While 12 percent of women may carry the genes for tetrachromacy, a much smaller percentage seem to be functional tetrachromats. Perhaps Ms. Antico's abilities are due to her decades of master use of color values in painting.

Dr. Jameson and her colleagues have not ruled out the potential for male tetrachromacy though the only cases being studied at present are female.

Ms. Antico's goals are to further legitimize her abilities with more testing and to help educate others about tetrachromacy. She also hopes that her paintings help people see nature with fresh eyes and appreciate things more.

"One of my main goals is for people to appreciate the Earth. I'm happy to just wake up and look at a flower. My main goal is to get my art out and help people look at their planet. I want them to be concerned about it, love it and save it."

Preliminary results from the empirical investigations of Kimberly A. Jameson, Alissa D. Winkler, Christian Herrera, and Charlie Chubb of The Human Tetrachromacy Research Collaborative are available at the group's website including a link to a scientific summary of Concetta Antico's results, plus encyclopedia and magazine entries on the topic of tetrachromacy. A video presentation of these scientific investigations is also available here.

(Note: the author has also recently tested positive for the genetic basis for tetrachromacy and will be undergoing further study as well.)