The Cincinnati Zoo & Botanical Garden is kicking off 2017 with some big news! Zoo scientists and animal staff captured the first ever ultrasound image of a Nile hippo fetus last week, confirming that 17-year-old Bibi is pregnant. 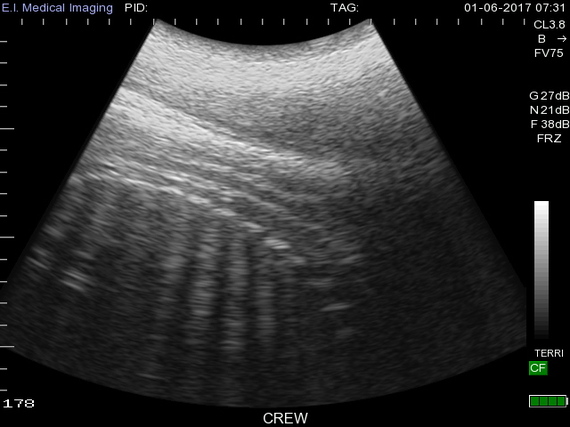 Keepers, and almost everyone who visited the new Hippo Cove in July of 2016, observed Bibi and her male companion, 35-year-old Henry, breeding. Suspecting and hoping that this behavior resulted in conception, reproductive physiologists, led by Dr. Jessye Wojtusik, from the Zoo's Center for Conservation & Research of Endangered Wildlife (CREW) began to perform weekly ultrasounds in August.

"In the early months, the uterus and developing fetus are located dorsally (closer to her spine). Once the fetus increases to a certain size it pushes lower into the abdomen so we are able to visualize it. We can now see the spine and beating heart," said Wojtusik. "Ultrasound provides a more definitive diagnosis of pregnancy than hormone profiles, which are sometimes misleading, and allows fetal viability assessment." 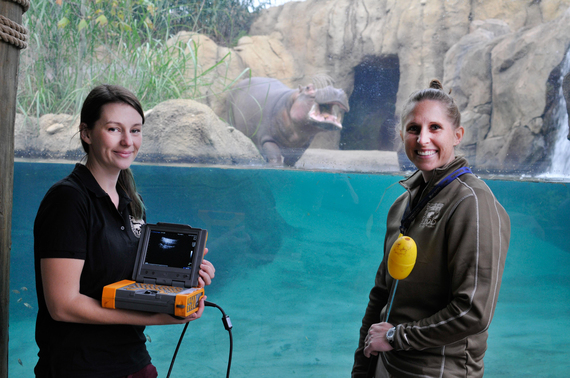 Wojtusik credits the hippo keeper team with making this milestone pregnancy diagnosis possible, saying that "Hippos are generally known for being very difficult to train and many folks were skeptical that we would be able to pull this off."

Keepers used positive reinforcement, primarily Bibi's favorite foods, to condition the 3200-pound hippo to stand in a certain location, lean against a gate and stay still during ultrasound procedures. "Fortunately for us, Bibi came to Cincinnati with a very solid background in training from her dedicated keepers at the St. Louis Zoo, which made it easy for our team to develop the ultrasound behavior with her. Once she's in position and holding steady, we keep the treats coming and Bibi is more than happy to cooperate. On a good day, she'll hold her position for up to 15 minutes, giving us plenty of time to search for the baby," said Africa head keeper Wendy Rice. "Henry has been an amazingly supportive and doting partner and he's been at every ultrasound! Generally he just swims some laps and watches from his indoor pool and occasionally lets out a bellow to Bibi."

The gestation period for this hippo species is eight months, so Bibi's official due date is sometime in March. Baby proofing and birth planning have already begun. Unless temperatures are unseasonably warm, she will most likely deliver in her indoor pool. Henry will be separated from Bibi during the birth and for about two weeks after. In the wild, female hippos leave the group a couple days before birth and return with the calf 10-14 days later.

The first residents of Hippo Cove received a breeding recommendation from the Association of Zoos and Aquariums (AZA) Species Survival Plan (SSP), the organization that monitors animal populations in Zoos. Henry has sired several calves, but Bibi will be a first-time mom. It's been more than 75 years since the Cincinnati Zoo welcomed a Nile hippo calf.

Nile hippos, also known as river hippos or river horses, are vegetarians and can weigh as much as 4,000 pounds. Males are typically much larger than females. Although hippos spend much of their day in the water, they actually can't swim at all. They float or walk along the bottom of the water.