I love to watch rehearsals: there's just something about seeing people process, collaborate, make mistakes, and work through them. So when Sheena Annalise, director of Arch Contemporary Ballet, invited me to take a look at her company's newest work Château, I opted to see it in progress, with all the parts still coming together.

I sat in on the first combined dancer and musician rehearsal. Typical of this stage in the process, the performers were still working to figuring out movement, spacing, and timing details. But the typical dancer/musician relationship seemed turned upside-down, with the string quartet adjusting its tempo and composition to suit the dancers instead of the reverse.

Annalise typically choreographs in silence, then brings in composers to create a score. Her rational is that choreographing to music can "put limits on the movement," but there is also something compelling about placing dance in the primary position. Since dance is so often considered subordinate to music--in terms of prestige as well as composition--it's refreshing to see music adapting to the demands of dance for a change.

As composer Concetta Abbate, explained "it's about creating music to accentuate the dance, rather than creating dance to accentuate the music." Abbate was initially given a video of the choreography, then, working with Jeffers' input, spliced together and overlaid her composition.

She showed me pages of diagrams in which she translated the dynamic flow of the ballet into a musical outline. Sometimes, the music corresponds directly to thematic movements, and other times she uses what she calls "movie music," creating an atmospheric background which takes backseat to the choreography.

Taking on this supportive role is actually a unique challenge for the musicians. In rehearsal, the composition was constantly modified upon finding that musical sections were too long or short, or that it was physically impossible to play a section at the tempo the dancers needed. The musician's positioning--spread throughout the stage instead of in a typical quartet formation--also disrupted their method of visually referencing each other to stay in unison.

There were still plenty of rough spots in terms of the music/dance connection, but it was exciting to see the artists work through them in a genuinely multidirectional dynamic. Still, as interesting as it was in rehearsal, I had to wonder whether this sense of collaboration would come across in the final product. The staging of the piece, however, does help display the dancer/musician interaction: the musicians are choreographed into the piece, periodically changing positions as the dancers weave through them. 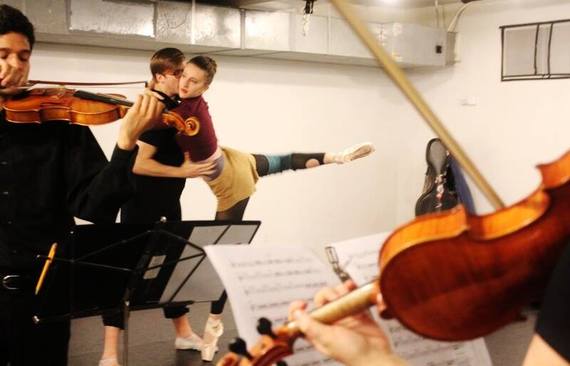 The choreography itself is based on the Château de Fontainebleau in Paris, with its various chambers representing various generations of history and aesthetics. Dancers with tapestry skirts--which they sometimes hold up to create a frame--represent "ghosts" of various historical figures pictured on the walls. The historical specificities are not necessarily recognizable to the audience, but the sense of shifting between different worlds is: the movement takes on characters that vary from regal and elegant to sharp and combative.

In addition to some male-female duets, the piece features some rather impressive partnering between the female dancers. This isn't exactly uncharted territory in itself--plenty of modern choreographers go there--but it's not often explored in pointe shoes. The choreography draws from contemporary weight-sharing techniques, but also from ballet pas de deux, including a series of luxurious pencheé promenades. With an aesthetic that is blatantly and unabashedly pretty, as well as powerful, these duets distinguish themselves from both the standard gender roles that predominate contemporary ballet partnering and the gender-neutral, functional character of typical modern partnering.

Given that Annalise herself has a mixed background in both ballet and modern dance, I was interested in what drew her as a choreographer to ballet vocabulary. She explained that she enjoys using the "harsh" linear aspect of ballet technique, which she can inject with smooth contemporary movements for contrast. This combination of stylistic influences is visible in her choreography, which intersperses serpentine spinal movements and Graham-inspired arms and floor sequences between ballet lines. Regarding pointe work, she sees the shoes as expanding, rather than limiting, movement options, enabling the partnered counterbalances and slides on pointe that occur frequently in her work.

For Annalise, it seems that the process of expanding choreographic possibilities involves placing different worlds in conversation, whether it is different dance vocabularies or different artistic disciplines. And at least from the midst of the process, it's a compelling conversation to watch unfold.