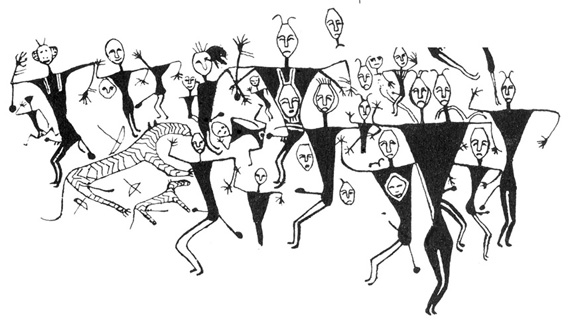 But one little-known, mysterious archaeological site does. The Kangjiashimenji Petroglyphs are bas-relief carvings in a massive red-basalt outcropping in the remote Xinjiang region of northwest China. The artwork includes the earliest—and some of the most graphic—depictions of copulation in the world.

Chinese archeologist Wang Binghua discovered the petroglyphs in the late 1980s, and Jeannine Davis-Kimball, an expert on Eurasian nomads, was the first Westerner to see them. Though she wrote about the carvings in scholarly journals, they remain obscure. Google retrieves only a few results, depending on the spelling. The petroglyphs deserve more attention. Advertisement

The cast of 100 figures presents what is obviously a fertility ritual (or several). They range in size from more than nine feet tall to just a few inches. All perform the same ceremonial pose, holding their arms out and bent at the elbows. The right hand points up and the left hand points down, possibly to indicate earth and sky.

The few scholars who have studied the petroglyphs think that the larger-than-life hourglass figures that begin the tableau symbolize females. They have stylized triangular torsos, shapely hips and legs, and they wear conical headdresses with wispy decorations. Male images are smaller triangles with stick legs and bare heads. Ithyphallic is archeology-talk for “erect penis,” and nearly all of the males have one. A third set of figures appear to be bisexual. Combining elements of males and females, they are ithyphallic but wear female headwear, a decoration on the chest, and sometimes a mask. They might be shamans. The tableau is divided into four fully-developed scenes beginning at a height of 30 feet and progressing downward. In the first scene, nine huge women and two much smaller men dance in a circle, seemingly admonishing their viewers. This is the only scene without ithyphallic men—though to the side, a prone bisexual has an obvious erection. Two symbols near the center look like stallions fighting head to head.

The second scene is packed with weird happenings. Women and men dance in a frenzy around a large ithyphallic bisexual about to penetrate a small hourglass female with an explicit vulva. His breastplate depicts a female head, with a conical headdress just like his. On the left, a second bisexual in a monkey mask is about to penetrate a small, faceless female. Nearby, a pair of striped animals lies prone amid bows and arrows, while at the other end, a giant two-headed female seems to lead the ritual. Disembodied heads abound, perhaps indicating spectators.

The next scene is smaller and cruder. A chorus line of infants emerges from a small female being penetrated simultaneously by a male and a bisexual while three more ithyphallic males await their turn. Another figure holds a penis longer than he is tall, pointing it at the sole large woman in the scene. She stands in front of a platform on which a faceless body lies prone, wearing what looks like the striped animals’ fur. The body resembles the females copulating in this and the previous scene. It is the only figure shown with its arms lowered, probably indicating death in a ritual sacrifice. A small dog is also at the center.

There are four additional scenes that seem more like sketches. Two include a pair of dogs and another depicts male and female torsos with multiple heads. The last figure has a very long penis but the body of a woman and seems to be wearing a conical hat. I think of it as the artist, though no artist could have carved such a large, complex, and detailed tableau in a single prehistoric lifetime. 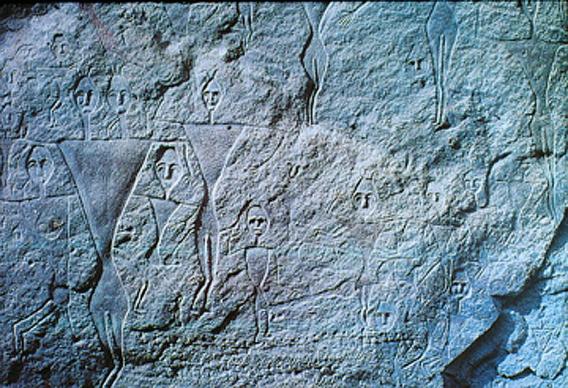 While fascinating in themselves, the petroglyphs also reveal a great deal about the earliest human settlement in China’s westernmost region. The intricately carved faces all display the long noses, thin mouths, and defined eye ridges of the Caucasian face. The people in the petroglyphs came from the West.

While unprecedented in Central Asia, the iconography echoes images far to the west. Triangular female figures with the arms held like those in the petroglyphs often appear on Copper Age pottery from the Tripolye culture in what is now Ukraine. The dog symbols are also strikingly similar.

Could the cultures be related despite a distance of 1,600 miles and an untold number of years? The answer depends on who created the petroglyphs. While Chinese scholars attribute them to nomadic cultures from 1000 B.C., Davis-Kimball points out that nomads generally create portable art and not huge tableaus. The makers of the petroglyphs had to have been a sedentary people, since the elaborate artworks appear to have been carved over a period of centuries. This narrows the potential candidates down considerably. The only time in prehistory when sedentary people are known to have populated the region was during the Bronze Age, the millennium prior to 1000 B.C.

The faces of these settlers are known to the world from desiccated corpses, perfectly preserved down to their eyelashes and the weave of their clothes. These mummies have been excavated by the hundreds from Xinjiang’s dry and salty desert sands since the 1980s.

The oldest and most intriguing bodies came from a 20-foot-high, man-made sand mound about 300 miles south of the petroglyphs. Known as Xiaohe, or Small River Cemetery No. 5 (SRC5), it was found in 1934 but then forgotten. The site is in a remote, restricted desert where China conducted nuclear tests. Rediscovered in 2000, the site had to be completely excavated in the following years to protect it from looters. Under the sand lay five layers of burials, from which 30 well-preserved desiccated corpses were recovered, the oldest dating to 2000 B.C.

The discovery proved politically explosive because most of the Bronze Age SRC5 mummies had long noses, eye ridges, and red and brown hair, none of which is typically Chinese. The Caucasian features seemed to contradict the official government view that the Han Chinese had the oldest historical claim to Xinjiang, dating to the second century B.C.

The question of which ethnic group lived here first is a serious issue today. Most of Xinjiang’s inhabitants are not ethnically Chinese but Uyghur—they belong to a Turkic-speaking, Muslim nationality that numbers 9 million and gives its name to the Xinjiang Uyghur Autonomous Region. They are indistinguishable from typical Europeans, and their ancestors first settled in Xinjiang in the ninth century. Uyghur nationalists, who want greater religious and cultural freedom and more autonomy from China, latched onto the ancient Caucasian mummies to claim deeper historical roots in the region.

The political conflict hampered research for a while. But when a 2010 genetics study concluded that the oldest mummies weren’t Han Chinese but weren’t Uyghur either, both sides backed down, leaving the subject to scientists and scholars where it belonged.

The cemetery where the mummies were found was unique in the world for its time. The site bristled with nearly 200 poplar posts, up to 12 feet high, and it required extravagant amounts of lumber. Some of the posts, painted black and red, were either torpedo-like or resembled oversized oars. The bodies lay on the sand, covered with boat-like coffins wrapped in cattle hides.

Viktor Mair, a professor of Chinese language and literature at the University of Pennsylvania and one of the foremost experts on the mummies, writes that SRC5 was “a forest of phalluses and vulvas … blanketed in sexual symbolism.” The torpedoes were phallic symbols marking all the female graves, while the “oars” marking the male burials represented vulvas. Many female burials contained carved phalluses at their sides, and the mound also contained large wooden sculptures with hyperbolized genitalia. “Such overt, pervasive attention to sexual reproduction is extremely rare in the world for a burial ground,” according to Mair (pdf).

DNA from the male corpses shows Western origins, while females trace to both East and West. Mair and other scholars think that the mummy people’s ancestors were horse riders from the Eastern European steppe who migrated to the Altai in Asia around 3500 B.C. After 1,500 years, some of the Altai people’s descendants, herding cattle, horses, camels, sheep, and goats, ventured south into what is now the Xinjiang region. Squeezed between the Tien Shan Mountains and the hot Taklimakan Desert, it is one of the world’s most hostile environments—a place so harsh that the Silk Road would later detour north or south to avoid it. But satellite photographs show ancient waterways in what is now barren desert, allowing those pioneers to survive in green oases in 2000 B.C.

It must have been a precarious existence, with staggeringly high infant and juvenile mortality. Perhaps that explains the exaggerated attention to sex and procreation at the cemetery and the high status of certain women. The largest phallic post at SRC5 was painted entirely red and stood at the head of an old woman buried under a bright red coffin. Four other women were buried in rich graves that stood apart from the others. 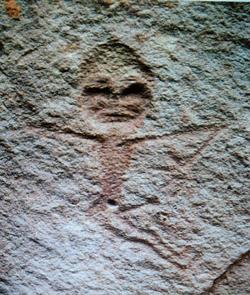 When I asked Mair if the petroglyphs could have been created by the people who buried their dead in SRC5, he said it was plausible. Perhaps the new immigrants carved the scenes to record their most important rituals for posterity.

Mair also noted that Caucasian features and a cultural obsession with sex aren’t all that linked the two sites, both of which are in the areas of Bronze Age settlements. Almost every one of the SRC5 mummies—as well as Bronze Age mummies from other locations—was buried with a flamboyant conical hat, made of felt and decorated with feathers. Though stylized in the petroglyphs, the headdresses on the female figures are also conical with wispy decorations that could be feathers.

The implications are tantalizing. Could the earliest scenes in the tableau represent fertility rituals originally brought from Europe by the migrants’ ancestors in 3500 B.C.? Do the large females represent high-status women like those buried in SRC5’s richest graves? Does the smaller size of the copulating females signify lower rank? If the two sites are indeed linked, why are men bare-headed in the petroglyphs but all wearing hats in the graves? Could they have been the bisexual shamans in the tableau? Or, as one Chinese scholar has suggested, were penises added to some of the female figures later, possibly signifying the shift from matriarchy to patriarchy? And is the iconography really linked to the Tripolye culture in the West or is it just parallel cultural evolution?

These are just some of the mysteries surrounding the Kangjiashimenji Petroglyphs. Hopefully, now that the political pressures have abated, the site will receive deeper study. But whatever the answers, if any are ever found, the tableau is at the very least a spectacular demonstration of sex as one of the driving forces behind the creation of art.