Archaeologists working in northwestern Kenya say they've unearthed the world's oldest stone tools yet -- and the discovery has thrown them for a loop.

Dating back 3.3 million years, the artifacts push back the archaeological record of tool technology by a staggering 700,000 years. That suggests tools were being fashioned even before the emergence of Homo -- the genus to which Neanderthals and modern humans belong (scroll down for photos).

"This discovery is important because the traditional view for decades was that the earliest stone tools were made by the first members of Homo, both dating to around 2.4 to 2.6 million years ago," Dr. Sonia Harmand, an archaeologist at Stony Brook University and the lead researcher, told The Huffington Post in an email. "The idea was that our lineage alone took the cognitive leap of hitting stones together to strike off sharp flakes and that this was the foundation of our evolutionary success."

A special feeling. The first tools were discovered by chance in July 2011 during an archaeological expedition in the Nachukui Formation, a rocky outcrop in the desert badlands on the west bank of Kenya's Lake Turkana. The researchers said they had strayed into an area off their intended path, according to a written statement issued by The Earth Institute at Columbia University, but "could feel that something was special about this particular place. By teatime, local Turkana tribesman Sammy Lokorodi had helped [us] spot what [we] had come searching for."

By the end of their excavation, the team had found 149 artifacts at the site, including sharp-edged tools measuring six inches in length and weighing six-and-a-half pounds, as well as flakes that were struck off from the tools and rocks that could have served as anvils.

The researchers dated the artifacts by analyzing the magnetic minerals in layers of rock above, around, and below where the artifacts were found. This paleomagnetism technique is used to date artifacts that don't contain carbon. The minerals act like a sort of "magnetic tape recorder," reflecting the periodic changes in the Earth's magnetic field.

Dr. Alison Brooks, a George Washington University anthropologist who was not involved in the research, called the finds "very exciting" in an interview with Science News. “They could not have been created by natural forces … [and] the dating evidence is fairly solid.”

Next steps. Who made the tools? Scientists aren't sure.

"We can be fairly certain it was a member of our lineage and not a fossil great ape, as modern apes have never been seen knapping stone tools in the wild," Dr. Jason Lewis, an archaeologist at Rutgers Univeristy and one of the researchers who made the discovery, told The Huffington Post in an email. "Which of the members of our lineage it was, however, remains to be determined."

The tool-maker might have been Kenyanthropus platytops, a 3.3-million-year-old hominin whose fossils were found less than a mile from the tools. Other possibilities include: Australopithecus afarensis -- another hominin species that was around at the time, the most famous of which is "Lucy" -- or a hominin of the Homo genus that has yet to be discovered.

"The Lomekwi tools are sophisticated enough that they are likely not from the first time a hominin tried to knap a stone tool," Dr. Harmand said in the email. "We think there are older, even more rudimentary stone tools out there to be found, and we will be looking for them over the coming field seasons."

An article describing the research, "3.3-million-year-old stone tools from Lomekwi 3, West Turkana, Kenya" is to be published in the journal Nature on May 21, 2015. 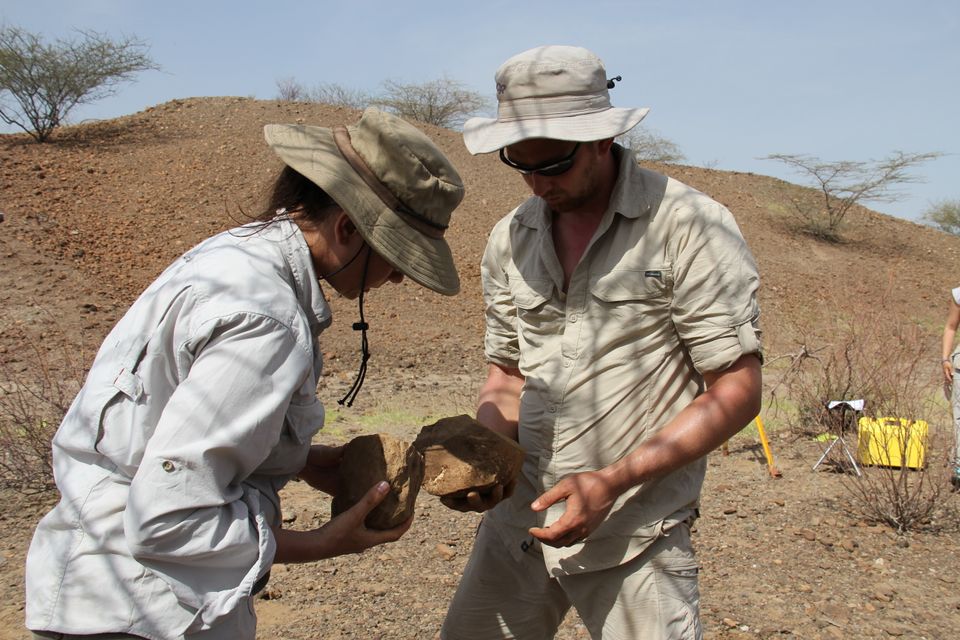