She may be 115 but she's still rocking lacy lingerie and eating whatever she wants. New Yorker Susannah Mushatt Jones just became the oldest recorded person in the world, after former titleholder Jeralean Talley died this week at the age of 116. Talley, who passed away in her home, was the third oldest-person titleholder to die this year. 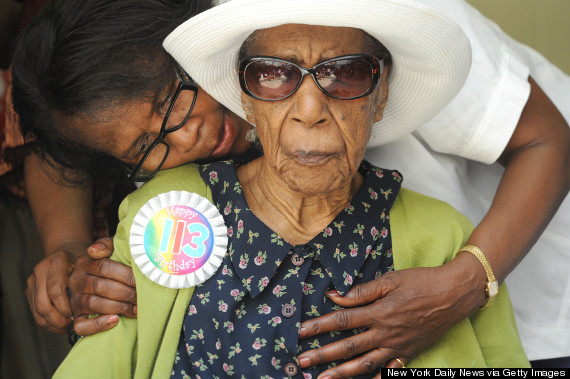 Jones pictured on her 113th birthday.

Jones will celebrate her 116th birthday on July 6th, according to the Gerontology Research Group, which keeps a running list of the world's verified living supercentenarians.

She was born and raised in Alabama but moved to New York City in the early 1920s to work as a child caregiver for the city's wealthy families. She never had children of her own but still remains close with some of her nieces and nephews who live nearby.

Jones lives on her own, with the help of 24-hour home health aides. She goes to bed early -- usually sleeping 10 hours a night -- and also takes naps throughout the day, her niece Lois Judge told The Huffington Post. She starts her mornings early with a hearty breakfast -- her favorite meal is bacon strips, grits and eggs -- then usually spends most of the day in her recliner. She also has an affinity for lacy lingerie. "You can never get too old to wear fancy stuff," she's said, according to TIME.

For her upcoming birthday, the family plans to get together like they do every year and the local senior center will also have a celebration. We know what's probably on her birthday wish list: lingerie.