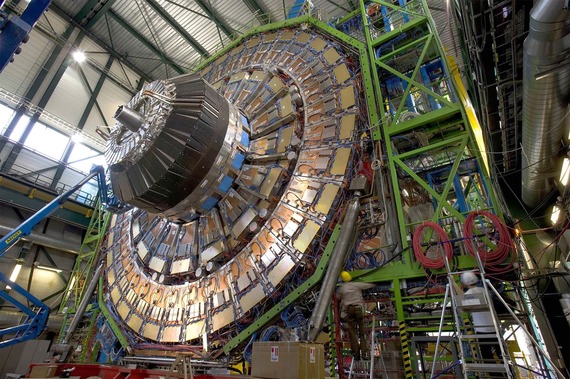 Physicists around the world eagerly await the resumption of operations of the Large Hadron Collider, a huge particle supercollider located near Geneva, Switzerland. This facility will allow researchers to study some of the oldest scientific questions ever posed. After a very successful data taking period between 2010 and 2012, the LHC shut down for two years for refurbishment, retrofits and upgrades. These retrofits were completed in late 2014 and the scientists started cooling down the magnets that make up the heart of this huge machine. Expectations were high for a spring 2015 startup.

On March 24, LHC scientists discovered that one of the magnets in the LHC had developed an intermittent electrical short. By taking x-rays of the offending magnet, engineers discovered a stray sliver of metal that was bridging the gap between a conductor and the outside of the magnet.

Warming up the magnet to remove the sliver is a long process. Given that the LHC magnets run at -455 degrees Fahrenheit, it takes about six weeks to warm one of them up, do the repairs, and then cool it back down. So the engineers devised a different approach. They injected a short pulse of electrical current (about 400 amperes for a few milliseconds). This jolt of current melted the sliver and the electrical short is now gone.

Scientists have returned the magnet to its operational configuration and are making sure that it runs stably and at the needed temperature. They will then establish that the entire chain of magnets are ready for operations. Once they are satisfied with the stability of the entire accelerator, they will start to circulate beam in the LHC.

Commissioning a scientific facility as large and as complex as the LHC is a difficult endeavor and this leads to uncertainty in the schedule, but CERN has announced that their scientists are working around the clock to get the LHC up and running. If no surprises present themselves, circulating beams could occur sometime between Saturday and Monday, with high energy collisions occurring in June. It might well be that this year the Easter Bunny could bring a particularly tasty treat for the good boy and girl scientists of the world.