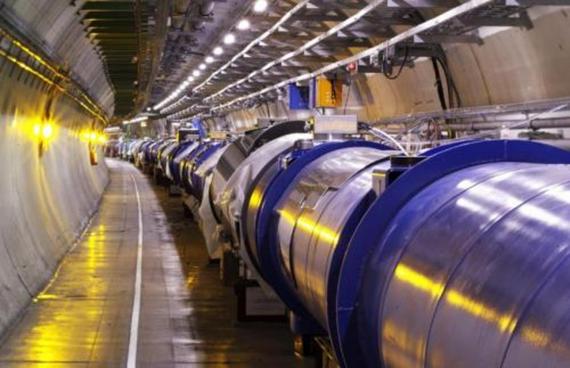 The Large Hadron Collider, or LHC, the world's most powerful particle accelerator, has taken another big step forward in its journey towards exploring new frontiers of knowledge. In the wee hours of April 10, the accelerator injected beams of protons and accelerated them to the expected operational energy of 6.5 trillion electron volts. This energy smashed the earlier record of four trillion electron volts, held by the LHC since 2011. This achievement represents a crucial advance in the commissioning of the facility, as it demonstrates that the equipment can operate at full energy.

The LHC ran from 2010 to 2012 first at 3.5 and then 4 trillion electron volts. In March of 2013, the accelerator shutdown for retrofits, refurbishments and upgrades. On April 5, scientists circulated beams in the machine, but at the lowest possible energy. That achievement demonstrated only the most basic functionality, while this new success demonstrates that the accelerating components and nearly ten thousand high power electromagnets can operate as expected.

The Large Hadron Collider is located at the CERN laboratory, just outside Geneva Switzerland. It was built to explore many scientific topics, but its primary purpose was to search for a particle called the Higgs boson, which is the signature of a theory that explains why subatomic particles have mass. The discovery of the Higgs boson was announced on July 4, 2012 and resulted in the 2013 Nobel Prize in physics for Peter Higgs and Francois Englert for their prediction of the particle's existence back in 1964.

The new and improved LHC has a different mission. It is first and foremost a discovery machine, which means one cannot predict exactly what it will find. However, scientists hope to solve the mystery of dark matter, which is a hypothesized form of matter that is five times more common in the universe than ordinary matter. Using the principle of E = mc, scientists hope to make this dark matter in the accelerator. Other questions that will be studied include the mystery of why the universe consists entirely of matter when our theory predicts that matter and antimatter should exist in equal quantities.

There will be more milestones over the next few weeks, but scientists hope to declare the LHC to be fully operational late in May, after which we can hope to hear of discoveries. The LHC will run for several years before another planned upgrade period.