WorldStove founder Nathaniel Mulcahy has just completed two months of work in Haiti, setting up a pilot project that will provide biochar-producing stoves and jobs for the Haitian people. The project was featured in an Earth Day press release from the UN Special Envoy to Haiti (former President Clinton) as an example of "building back better" by incorporating environmental sustainability in the recovery effort.

Before WorldStove, Mulcahy was an award-winning industrial designer creating consumer products for large corporations like Emerson Appliances. Eight years ago, while lying in bed recovering from a life-threatening accident, he realized that he needed to focus his energies on innovative designs to improve the quality of life for people who were less fortunate. The result was his invention of the fuel efficient, low emissions LuciaStove, named after the canine companion who saved his life.

The breakthrough that set the LuciaStove apart from similar gasifer stoves was Mulcahy's patented design which uses venturi holes to create negative pressure while a flame cap based on Fibonacci spiral geometry prevents oxygen from entering the pyrolysis chamber. The combination delivers better air control for cleaner combustion of the gases produced from the biomass it uses as fuel. It also produces biochar.

Mulcahy says that people are often surprised that such a sophisticated design would be used for such a simple product, a cook stove for developing countries. Mulcahy answers, "Why should we provide developing nations with stoves that look like cast off scrap? Style or elegance of design usually only involves added thought, not added cost."

Mulcahy considers it a matter of respect not only to offer a clean, efficient stove to the world's poor, but to make sure that the stove is adapted to people's needs and not the other way around. WorldStove pilot projects in several African countries, Indonesia, and the Philippines have encountered all manner of local conditions that have required changes in the stove setup or manufacturing techniques.

The adaptability of the Lucia stove faced its greatest test in Haiti this winter where Mulcahy carried out a WorldStove Pilot Program in the short space of two months. He not only redesigned the stove to be produced with available tools and materials, but he completed a camp survey. The fact that since the quake more children have been forced to take responsibility for cooking made safety a top priority, so Mulcahy developed a Haitian specific pot stand with heat-shield and windscreen to accommodate the wide variety of pots used in Haiti and protect children from burns. 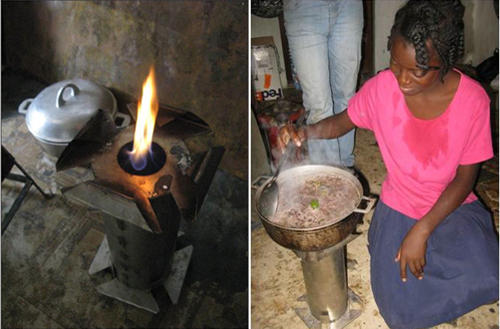 Left: The blue flame indicates that the Haiti Lucia stove is burning cleanly and efficiently. Right: Children have taken on more cooking responsibilities since the earthquake. Photo Credit: World Stove

Local versions of the Lucia stove must be tuned to work with available fuels. Peanut shells need different conditions than rice hulls, for instance. Mulcahy found that Haiti has many waste products that can be made into fuel pellets or used directly, including sugar cane waste, rice hulls, coffee hulls, bamboo, sawdust, coconut shells, mango pits, palm fronds and waste paper.

One of the best moments of Mulcahy's two months in Haiti was the day he first tuned a locally-built stove to run on the available pellets. That night he was able to cook a plateful of rice, beans and meat sauce for 21 people with only three handfuls of pellets.

Another prize moment occurred when Mulcahy showed up late to a village artisan's shop only to find the artisan already engaging a crowd of people demonstrating the stove and explaining how the biochar would help restore their soils. The metal workers began to add decorations of trees and birds to the stoves, telling Mulcahy that the pictures represent what will happen if people use the stoves to make biochar - the trees and birds will come back to Haiti. 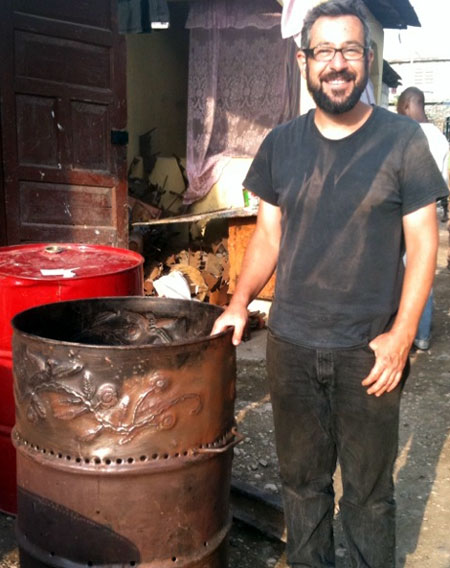 Nathaniel Mulcahy showing designs that metal workers added to the stove wind screens. The metal workers say that trees and birds will return to Haiti when the soil is rebuilt with biochar. Photo Credit: World Stove

Almost a third of Haiti's land has lost so much topsoil that it is not possible to grow food crops. As a result, Haiti can no longer feed itself and people have fled to the cities where they were more vulnerable during the earthquake. Biochar can be a critical factor not only in restoring topsoil to Haiti but in revitalizing the rural economy and repopulating the countryside.

In the next phase of the Haiti project, WorldStove will work with United Nations Environmental Programme (UNEP), the World Food Programme (WFP) and the Haitian Government to build stove-manufacturing hubs and create thousands of jobs making pellets and distributing biochar in the rural areas. Preliminary agreements are in place with 48 agricultural cooperatives that will provide crop waste for pellet production. The farmers will receive a proportionate amount of biochar in return to build their soils and increase production.

Kelpie Wilson is the communications editor for the International Biochar Initiative, working to promote sustainable biochar as a powerfully simple tool to fight global warming and boost food security.