A British woman who took a bite out of a Chicken McNugget nearly lost her lunch after seeing what looked like a worm in the middle of the McNugget.

Nikki Sanders made the stomach-turning discovery after purchasing a Happy Meal for her 4-year-old daughter at a McDonald's in Tamworth, England on Sunday.

Her daughter, Emily, wasn't hungry so Sanders decided to eat the breaded chicken pieces herself.

"I just took a bite from a chicken nugget and it tasted odd," she told the Tamworth Herald. "I suddenly saw a pink stringy thing hanging down and spat the rest of the nugget out into the bag. I couldn't believe it, I just felt sick." 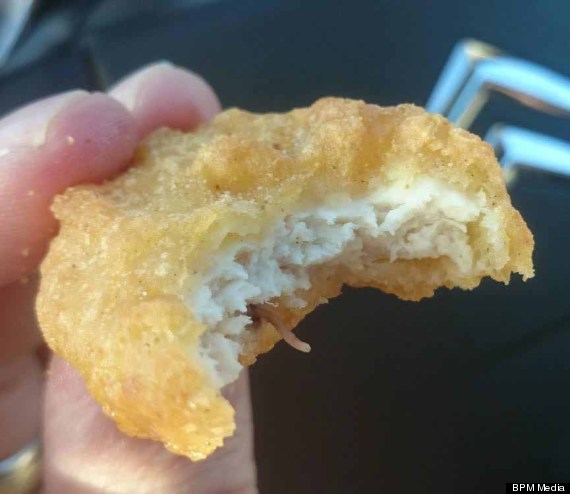 “I’m very fussy about what I eat and when I saw what was in the McNugget I went white,” Sanders said, according to the Mirror. “I’m just thankful Emily decided she didn’t want her Happy Meal. One good thing has come out of this, though. It’s turned me off processed meat. I’m eating a lot healthier now.”

Sanders' husband, Neil, was in the restaurant when the nauseating nugget was discovered.

“It looks like a worm, but I can’t swear it’s one until tests have been carried out," he told the Birmingham Mail. “Whatever it is, it shouldn’t be in there.”

An employee offered the Sanders family free food for their trouble.

A McDonald's spokesman said the company is sorry about their dining experience and that food safety "is our highest priority."

The spokesman told the Birmingham Mail that an investigation has been launched and the suspect nugget will be sent to a specialist for identification.