Perhaps you have also been fretting over the health care reform bill in its many and mysterious mutations. I started out excited, especially about the public option and the idea of presenting a counter-punch to those miserable insurance company behemoths, their continually rising rates and their hideous unknowable opt-outs for pre-existing conditions etc. Then the public option started to blink on and off like a bunch of quantum dots and the rest of the bill became more or less incomprehensible. So I decided to stop following the ongoing debate too closely. It was becoming too upsetting.

Today in the New York Times I decided to take the bull by the horns and do some catching up on where it all stood. I would read the article entitled "Democrats See Room for Hope on Health Bill" with its sub-headline "Obama Hails Deal -- Details are Scanty." I made it through the first sentence which is " Senate Democrats said on Wednesday that they were not sure exactly what was in a deal that the majority leader said would surmount a disagreement over a proposed government health plan. But they voiced guarded optimism that it would ultimately help them pass major health care legislation." Then it dawned on me "Well, if THEY don't know what is in it, why in the world am I getting myself upset because I don't know?"

Its bad enough that for the last decade I have been co-dependent with the presidents. During the 8 miserable years of the Bush administration, I was so filled with disgust and rage toward the president and vice president for their millions of arrogant amoral affronts to everything I held dear that I couldn't even look at either of them when they appeared somewhere, let alone bring myself to listen to their public statements. It was just too upsetting. Now I have started to do the same thing with Barack Obama, but for the opposite reason. I like his intelligence and demeanor and analytical abilities so much and am so afraid that the quicksand left behind by the Bush administration has put him in untenable situations to which there is no reasonable solution that once again I can't watch. It is also just too upsetting.

And then last night when I was walking around the market in search of some comfort food that wasn't too bad for me, I realized that all my worries about health care reform are for naught. Because as usual the wonderful 21st century world of American commerce and industry has stepped in to the void and is handling my health concerns for me. Just like Milton Friedman predicted. The marketplace is taking care of everything. Even in the pre-packaged hot chocolate section there is more attention than ever to salubrity. (look it up.) 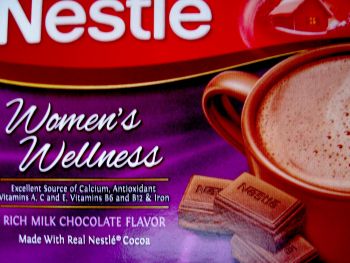 Why, its as if the marketing department at Nestle's designed it just for me! I'm a woman! I'm health conscious! And look... its not just a steamy foamy cup of hot chocolaty deliciousness. No! It says right there on the front of the box that its also an excellent source of calcium, antioxidant vitamins A,C and E, B6 , B12 and Iron!!! Pinch me, I must be dreaming!! This is the very treat I have been looking for all my life. Now let's see whats in it because it can't taste very good and be that good for me, can it?

So hats off to Nestles. Somehow they managed to get sugar, corn syrup and hydrogenated oil reclassified as a woman's health food! I've been waiting for this moment my whole friggin' life!
I can't wait til they add B12 and calcium to Marlboro Reds and Jack Daniels!