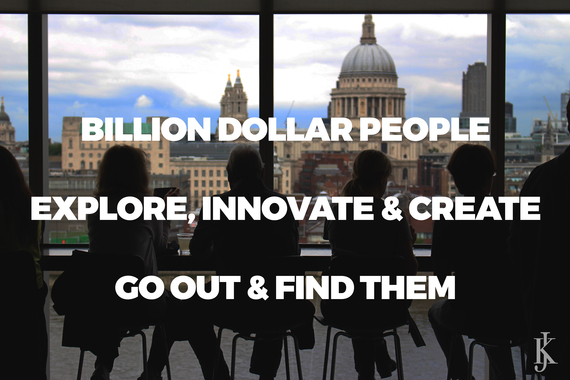 "Don't worry about finding the million dollar idea. Surround yourself with billion dollar people and they'll come." When I first heard my colleague, Daniel Reji, say this, I didn't quite understand what he meant until I had the chance to reflect on my own entrepreneurial experiences. The long nights. The productive business meetings. The less than productive performance reviews. The failures. The successes. It all seemed to make sense when I narrowed down the one common denominator: company. And no, I'm not referring to a company, but rather the company I chose to surround myself with.

I know you're probably thinking, how does this girl know so many billionaires? Or, how am I supposed to meet any billionaires? But what if I said that you probably already know one? It just might be you. Maybe it's the kid in your classroom who never participates because he's probably pursuing business leads on the d.l. Maybe it's the girl at the dining hall who looks like she needs to get her life together, but she probably just spent 36 hours straight creating a beta platform at a hackathon. Billionaires are everywhere, you just have to find them.

Nobody believes you have the next million dollar idea. Nobody believes your best friend has the next billion dollar idea. They'll tell you, you don't have the mind of Steve Jobs, the technical skills of Mark Zuckerberg or the business sense of Sheryl Sandberg. But what if you surrounded yourself with people who possess these qualities? Success has 10% to do with what you know, 30% to do with who you know and 60% to do with what you know about who you know. My colleague, and very good friend, Daniel, is not only one of the smartest guys I know, but he's also got an incredible eye for design. My Co-Founder, Chisa, is the master of branding. My partner, Nick, has a gift for absolute self-awareness that ultimately allows him to create meaningful and genuine relationships. It's this collective of brilliant minds, souls and personalities that have made my life, and entrepreneurial journey, as fulfilling as it is.

As you go through college, you'll experience many phases. One of which will be the attempt to befriend every random person you form some affinity with your freshman year. This group will slowly dwindle as you progress through your academic career, and the individuals like me, with unwavering entrepreneurial fires in their bellies, will begin to emerge. You'll find out that there are, in fact, people just like you. People who dare to question social norms. People who defy the status quo. People who are crazy enough to think they can change the world. Eventually as you sculpt your inner network, you'll begin to see a team of billionaires. No, I'm not suggesting that every one of your friends should or will be Elon Musk or Oprah Winfrey. But you'll see your conversations metamorphosing from "Why isn't there anymore Bacardi in the fridge?" to "Why isn't there a judgement-free rapid response application for college students to escape sketchy or precarious social situations?"

When you surround yourself with billion dollar people, you'll begin to realize that challenges become your Friday night. You'll begin brainstorming, sketching, prototyping, tinkering and innovating until you realize that you've all been completely consumed by the obsession of creating meaningful solutions to everyday problems. You'll become engulfed in a passion for making the world a better place.

Now take a moment to think of three people you idolize. People who inspire you. People who motivate you. People who make you want to be better or do better. Now go out and meet 10 new people a week for a month. Try to surround yourself with old and new friends who embody the very characteristics you admire in these three people you idolize. Because the moment you stop forming relationships, and start developing creationships is when you'll see your dreams beginning to blossom. If you want to succeed, however you've defined what that looks like for yourself, you can't just relate to people, you have to create with them. Create new realities. Create new possibilities. Create ideas. Create movements. Create products. Create companies. Create meaningful solutions. If you want to know where a creationship is going to go, you have to know where you want to grow. These types of friendships are going to keep you hungry, hype and humble.

When I was originally introduced to PeduL, the startup company I co-founded, I instantly recognized that the idea wasn't novel, but it was necessary and unaccomplished. It was like uncharted land. But I wasn't immediately sold on the concept as much as I was on the people behind it. The team exuded professionalism, perspicuity, curiosity, authenticity and accountability. I admired their yearning to conquer a problem that afflicts millions of students and graduates just like me. Once I formed a creationship with individuals on my team that reached far beyond our business relationship, I truly began to understand what Dan meant all along. If you're going to inherit the entrepreneurial mindset, and catch this infection of "world-solving," you must first form creationships that feed your curiosity. It can't go to waste through mindless conversations, or unproductive evenings. Your curiosity must explore and attempt to solve the world in the way it's meant to. And the only people most likely to see the world through a similar lens are those infected with this same disease...the billionaires.