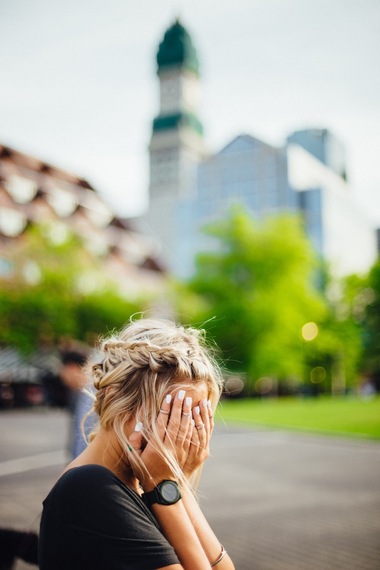 Forget what you might expect about shame and guilt over divorce being largely the relic of an earlier time before the culture became more accepting of a diversity of lifestyle choices, researchers state.

Feelings of personal failure and the perceived prejudices of others were pervasive even among young adult women in the U.S., one study revealed.

And one place many of the women, both believers and non-believers, identified as a powerful source of stigma and judgment was religion.

"It's hard because I am Catholic so divorce is frowned upon," said a 28-year-old woman who finds herself slowly distancing herself from Catholicism.

Yet it is not just any one denomination that is falling short, the research suggests.

The lack of pastoral care has not gone unnoticed.

In March, Pope Francis brought the issue of religion and divorce to international attention in an apostolic exhortation calling for less judgment and more compassionate care and support for divorced Catholics.

Even those who remarry outside the church must be encouraged "not only to realize that they belong to the Church as the body of Christ, but also to know that they can have a joyful and fruitful experience in it," the pope said in Amoris Laetitia, the Joy of Love.

But research indicates faith communities still have a long way to go.

Alone in the crowd

A theme that runs through many of the studies on religion and divorce is just how much psychological damage divorce continues to inflict.

Eight of the nine participants in the in-depth study of young adult women spoke of identifying as failures after their divorce.

Divorce "has been a source of embarrassment for me and I'm not someone who is embarrassed by anything," one 27-year-old business professional admitted.

She is among many women who are fearful of revealing their divorced status on dating sites, at work or to all but their closest friends.

"Feelings of failure and perceptions of blame pervaded the narratives of the women, confirming the underlying power of social expectations related to the sanctity of marriage," researchers from the University of Massachusetts reported in the Journal of Divorce & Remarriage.

A separate study focusing on 11 divorced Catholic women and men in Slovenia found each participant reported feelings of loneliness, rejection, unworthiness and insecurity.

What helped aid them in their recovery was a close personal relationship with a divinity they believed cared about them and would not leave their side.

But the other leg associated with the relation of religion and positive mental health in many studies are social networks -- the access to friendship, support systems and feelings of being part of communities that validate the inherent worth of the individual in difficult times.

And that type of outreach and support is missing in many congregations.

One four-year ethnographic study of 41 individuals across six faith traditions found even as divorced individuals turned to comforting rituals and worship services to ease their pain they experienced "a marked sense of aloneness, resulting from individual shame and congregational silence."

A black Baptist man active in the same church most of his life recalled a group of people who talked behind his back as he sat in his pew crying after his ﬁrst marriage ended.

A Reform Jewish woman did not reveal details of her separation to congregants for fear of gossip and harsh judgment. "You don't tell them everything, because they're all yentas; everybody's a yenta."

In a Unitarian Universalist congregation, there was a perceived taboo about discussing divorce.

Several divorced Catholics reported feeling like "lepers" listening to homily after homily about the sanctity of marriage while never hearing words of comfort in their direction.

"One might expect that I would ﬁnd heightened aloneness and silence in conservative congregations, where heterosexual marriage is highly valued and divorce openly discouraged, but lingering shame and silence around divorce was present for respondents in liberal congregations as well," sociologist Kathleen Jenkins of William & Mary reported.

"The persistence of marriage and life partnerships as cultural ideals shaped feelings of shame for divorced congregants and fueled silence around discussion of divorce across religious traditions," she added.

Are you currently married, widowed, divorced, separated, or have you never been married? 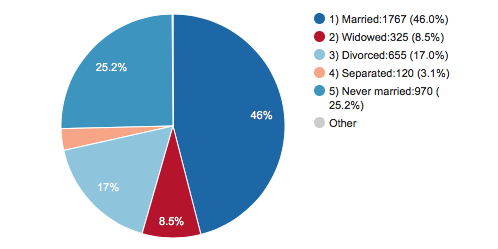 What are the characteristics of congregations that provide support and outreach to individuals in troubled unions?

The Indiana study found the markers include a willingness to empower laypeople in these ministries and having clergy with a realistic sense of confidence of how they can help people in failing marriages.

It also required a delicate balance between upholding the value of lifelong marriage, while acknowledging the reality that sometimes marriages fail.

"When congregations draw boundaries around the prohibition against divorce too tightly, either there will be no divorce in the congregation or pastors will not hear about it from congregants--either because divorced parishioners conceal their troubles or divorcees exit," sociologist Mary Ellen Konieczny of the University of Notre Dame said in the journal Sociology of Religion.

"On the other hand, where there is less clarity and more plurality around marriage models, such as in progressive churches of the mainline, divorce can become normalized--and then, similarly, couples do not approach pastors because divorce seems inevitable, and pastors feel that there is little that they can do besides accommodate divorce," she noted.

Either way, just giving up or, in the pope's words, simply applying moral laws "as if they were stones to throw at people's lives," the suffering of divorced individuals is only likely to increase, research indicates.

Test your knowledge of religion and singles with an engaging quiz and accompanying story.