Some of this election cycle's long-shot candidates obviously don't have the resources for a fancy website to entice voters. Below are some of the sites that are most in need of help.

B.J. Guillot for Congress informs us that the Republican drives a Nissan Leaf and his wife drives a 2010 Toyota Prius. The couple also has two indoor cats. Guillot is attempting to unseat Rep. Rick Larsen (D-Wash.). 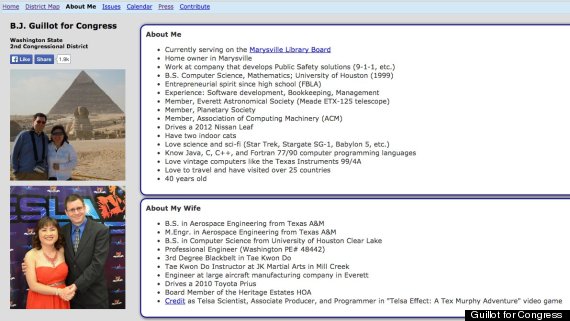 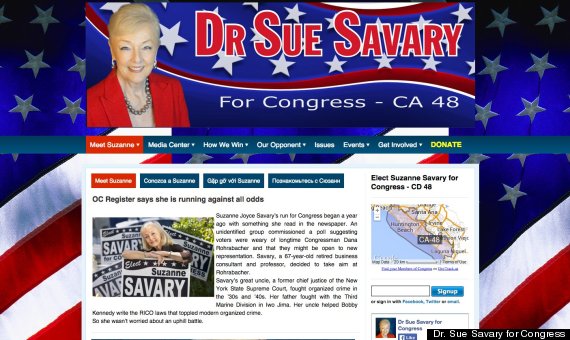 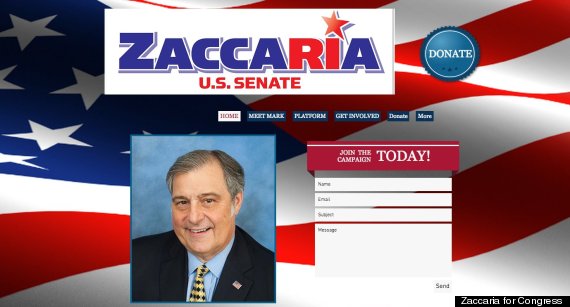 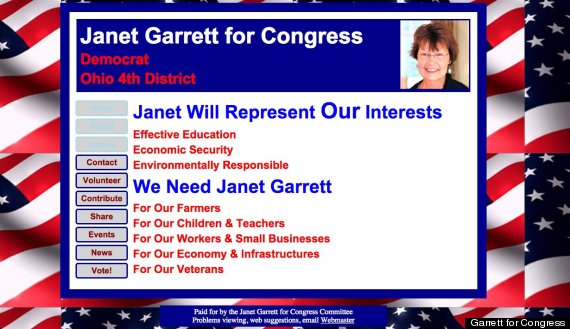 Nothing communicates love for one's state more than typing out the state name in the colors of its flag ... even when that means the "d" in Maryland is indistinguishable from the website background, as it is on the site of this GOP candidate, David Banach for Congress. 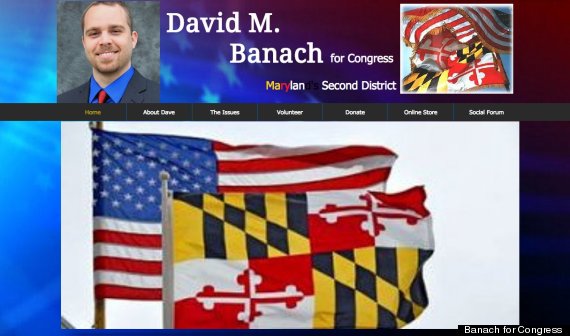 Kamau Bakari, an Independent America Party candidate challenging Rep. Dina Titus (D-Nev.), has a conversation about race with rancher Cliven Bundy in a video featured prominently on his website. 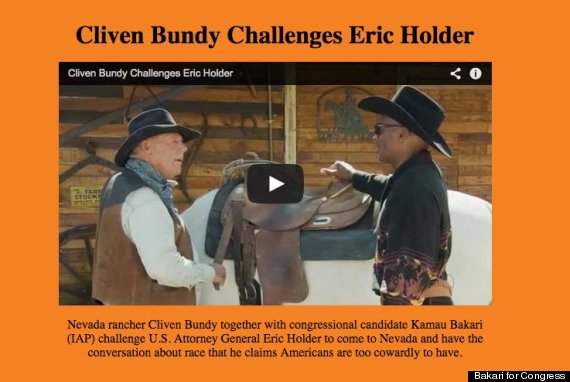 Candidates Who Try To Maintain An Element Of Mystery

We're not sure what Democratic congressional candidate Nate Irvin looks like, but his website has some nice photos of American flags, horse derrieres and stacks of paper. 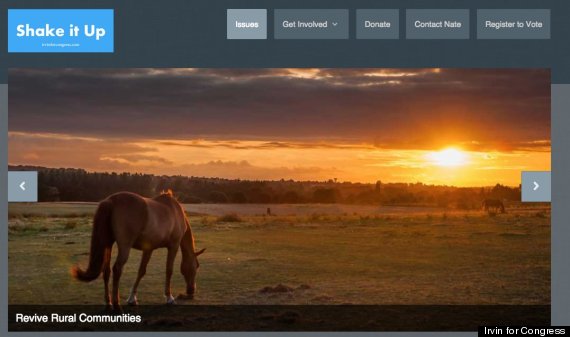 Kenneth Stepp for Congress doesn't include a picture of the Democratic candidate from Kentucky either. The site also falls into the Websites That Are Actually Just Blogs category. 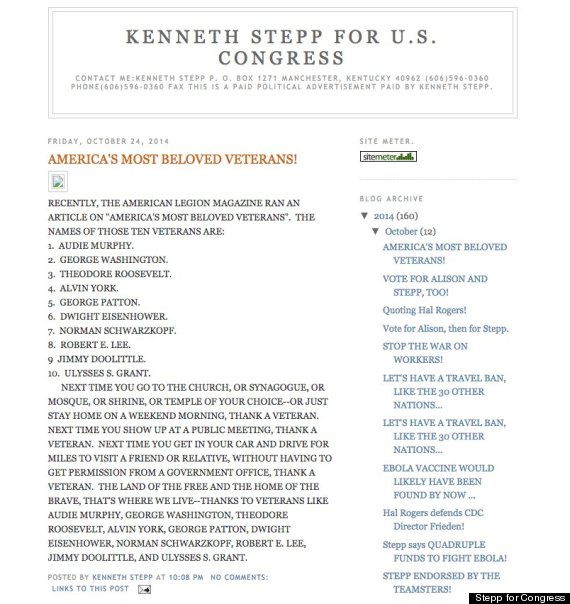 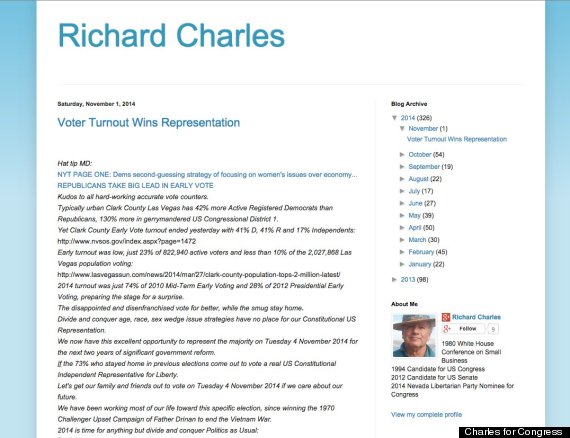 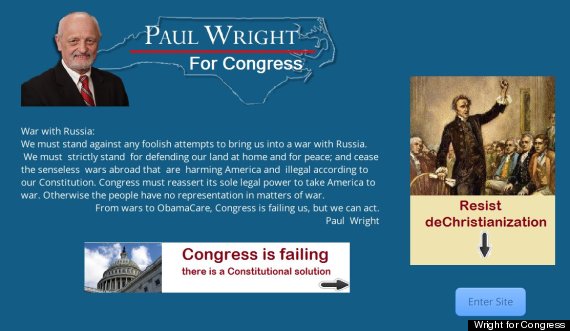 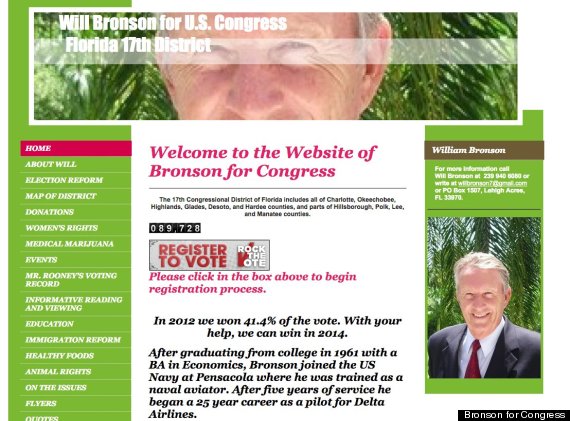 Rep. Kerry Bentivolio (R-Mich.)
AP
Before winning his congressional race, Bentivolio was a reindeer farmer, Santa impersonator and star in a low-budget 9/11 conspiracy movie -- as well as a veteran, auto designer and teacher. He is defending his seat against attorney and "foreclosure king" David Trott in Michigan's 11th District.
Republican House candidate Jake Rush
Rush, an attorney who is challenging Rep. Ted Yoho (R-Fla.), led a double life. Until late last year, he also went by alternative identities such as "Chazz Darling" and "Staas van der Winst" as a member of the Mind's Eye Society, a group of gothic-punk role-players who pretend to be supernatural beings like vampires. Rush defended his hobby, saying he's simply "a gamer" with "a deep appreciation for theatre."
Wisconsin state Sen. Glenn Grothman (R)
Getty Images
Grothman, who is taking on Rep. Tom Petri (R-Wis.) in the state's 6th District, has advocated for a number of deeply unpopular policy positions, like making public employees work on Martin Luther King Day and reverting to a seven-day work week. He has also said Kwanzaa is a fake holiday that "almost no black people today care about."
Arizona Secretary of State Ken Bennett (R)
AP
Bennett, who is running in the Republican primary to succeed Gov. Jan Brewer (R), threatened to leave President Barack Obama off the ballot in Arizona if Hawaii didn't verify Obama's birthplace. He made the threat a year after the White House produced Obama's long-form birth certificate.
Democratic congressional candidate Aaron Woolf
Campaign
Woolf, who is running to succeed retiring Rep. Bill Owens (D-N.Y.), has an unconventional background as a congressional candidate: He is a documentary filmmaker who made the award-winning "King Corn" and the owner of an organic deli and grocery store in Williamsburg, Brooklyn called "Urban Rustic."
Republican congressional candidate Isaac Misiuk
Campaign
The 24-year-old Misiuk is an engaged father of one child and a second-year student at the University of Southern Maine. He is attempting to unseat Rep. Chellie Pingree (D-Maine) and may be the youngest congressional candidate in the country.
Iowa state Sen. Joni Ernst (R)
Associated Press
Ernst, who will challenge Rep. Bruce Braley (D-Iowa) for retiring Sen. Tom Harkin's (D-Iowa) seat in November, gained crucial momentum in her primary by running an ad in which she proudly touted her background castrating hogs, saying she knows "how to cut pork."
Democratic Senate candidate Rick Weiland
Associated Press
Weiland, who is in the race to fill the seat being vacated by Sen. Tim Johnson (D-S.D.), visited every one of South Dakota's 311 incorporated towns. When he finished his tour of every town, his campaign announced that he'd do it all again.
Republican Senate candidate Milton Wolf
Associated Press
Wolf is a a radiologist and tea party activist who is challenging Sen. Pat Roberts (R-Kan.). His campaign came under fire in February after it was revealed that he had posted and commented on his patients' X-ray photographs on Facebook in 2010. Some of those patients included fatal gunshot victims. Wolf has also compared his distant cousin, who happens to be President Barack Obama, to Adolf Hitler and Benito Mussolini.
Maine Gov. Paul LePage (R)
AP
LePage, who has been called "America's Craziest Governor" and "The Worst Governor Of All," is up for reelection in November. In one famous incident, he told the NAACP to "kiss my butt" when the group complained that he had refused to attend a Martin Luther King Day breakfast. He also said President Barack Obama could "go to hell" and told attendees at a fundraiser that the president "hates white people." LePage also once told students: "If you want a good education, go to private schools. If you can't afford it, tough luck. You can go to the public school."