A far-reaching storm system tore across the South on Tuesday, causing what is likely to go into the record books as the worst Christmas Day tornado outbreak on record. The storm responsible for the severe weather also spread a swath of snow and ice from Texas to Indiana, and the whole mess of extreme weather slid east on Wednesday, with a string of blizzard warnings that stretched at least 700 miles across seven states as of midday Wednesday.

The storm was already wreaking havoc with holiday travel. More than 325 flights had already been canceled as of Wednesday morning, with more cancellations expected as the storm works its way into the busy Northeast corridor.

The combination of heavy snow, strong winds, and cold temperatures made for especially treacherous conditions throughout the Ohio River Valley and into the Appalachians. Up to 2 feet of snow is likely to fall in some areas of northern New England by the time the storm system moves out to sea late Thursday.

Snow accompanied by lightning and thunder — a combo known as “thundersnow” — was observed in several states, including Arkansas, Ohio, and Indiana. Thundersnow is an indication of tremendous vertical motion of air taking place in the atmosphere, which can lead to heavy snowfall rates of 2 or more inches per hour.

The tornado outbreak began in Texas on Christmas morning, where strong winds knocked a tree onto a truck near Houston, killing the driver (to explore the tornado reports, use Climate Central's tornado tracker). Later in the day another fatality was reported in Louisiana, also due to a fallen tree. Despite 34 tornado reports (a total that will be revised downward as storm surveys are conducted, and duplicate reports are discovered), including a tornado that moved through heavily populated Mobile, Ala., Tuesday night, the death toll as of Wednesday at midday stood at just three. One of these fatalities was due to a traffic accident on ice-slickened roads in Oklahoma, according to the Associated Press. The Mobile tornado came just five days after another twister touched down in that city. 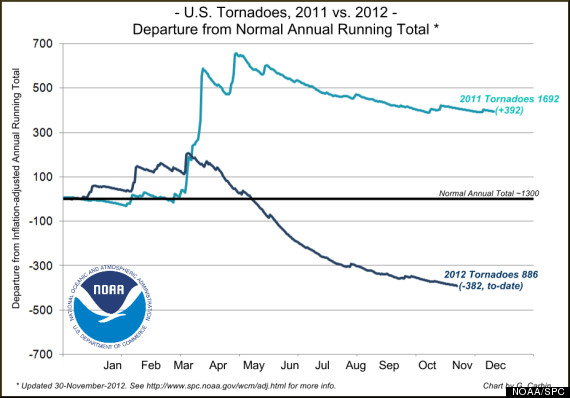 The Carolinas were facing more severe thunderstorms on Wednesday, including the threat of tornadoes as well as damaging straight-line winds, with the highest threat for severe weather in eastern North Carolina, northeastern South Carolina, and extreme southeastern Virginia. The National Weather Service was not anticipating a widespread tornado outbreak on Wednesday, however.

The tornadoes on Christmas Day marked an end-of-year rally in the number of twisters to strike the U.S., and ended the third-longest streak of days between deadly tornadoes, at 165. After a record tornado season in 2011, when 1,692 tornadoes left 553 dead and thousands more injured, 2012 has set records for the fewest tornadoes, with just 886 observed through Nov. 30. The month of July 2012, for example, set a record for the fewest tornadoes on record for that month since modern records began in 1954.

The wintry side of the storm left 13 inches of snow in Arkansas, including nearly a foot in the Little Rock area, and 11 inches in southern Illinois. Bloomfield, Ind., picked up a foot of snow by Wednesday morning, with more to come. 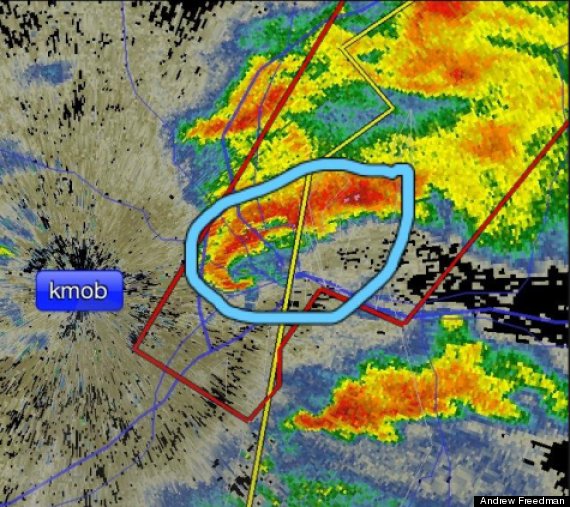 The storm also left several inches of snow in northern Texas and southern Oklahoma, as Arctic air moved in on the backside of the intense low pressure system.

On Wednesday and into Thursday, the storm had its sights set on the Northeast, where a mess of wintry precipitation is already breaking out. Snow and sleet in Washington, D.C. changed to sleet and rain, and a rain and snow mix is expected for New York City and Boston, while snow piles up in inland areas. Ski areas in the Northeast could get walloped with close to 2 feet of snow — the first major storm of the 2012-13 ski season.

While far weaker than Hurricane Sandy, this nor’easter is unwelcome in coastal areas that suffered damage during that storm. Only minor to moderate coastal flooding is expected, but wind gusts may reach 60 mph from coastal New Jersey to downeast Maine, as the storm intensifies while moving from near New York City on Wednesday Night to the Gulf of Maine on Thursday morning.

This powerful winter storm comes at the tail end of yet another warmer-than-average month in the lower 48 states, capping off the warmest year on record. Based on NOAA statistics, record daily high temperatures have outpaced record daily lows by a 10-to-1 ratio so far this month.

In the wake of this storm, much colder air will work its way into the East, possibly setting the stage for more snow during the next week. 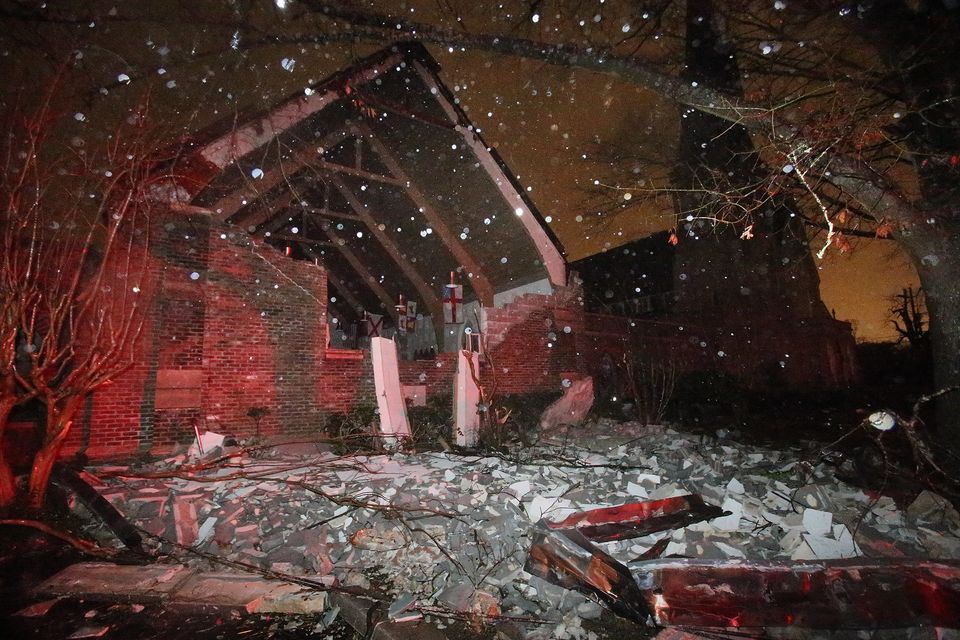 1 / 32
The front wall of the parish hall at Trinity Episcopal Church on Dauphin Street in Mobile, Ala. was torn off by a tornado on Christmas Day, Tuesday, Dec. 25, 2012 in Mobile, Ala. The tornado hit midtown Mobile causing extensive damage to the church as well as Murphy High School. (AP Photo/AL.com, Bill Starling) MAGS OUT
AP