Anyone can be a father, but it takes a special person to be a bad dad.

You need a sprinkle of narcissism, a dash of bullheadedness and three scoops of a blatant disregard for the conventional rules of propriety.

After combing our extensive files, HuffPost Weird News has found a few fathers who, if the allegations and accusations are correct, will never be candidates for father of any year (unless the award is given ironically).

Take Antonius Hart, Sr., who set a good example for his son, Antonius Hart Jr. when they didn't get the chicken wings they ordered at a Memphis fast food chain.

The two drove back and waved an AK-47 rifle at the employees who forgot the order.

If there is strength in numbers, then surely Orlando Shaw is a great dad.

The Tennessee man has 22 children by 14 women and is being sued in what might be one of Nashville's most bizarre child support cases.

Still, Shaw said he loves all of his kids and considers himself a good father. It's just that he can't afford to pay child support.

Anthony Michael Hedger, 24, was arrested earlier this year by the Greenville County Sheriff’s Office and charged with unlawful neglect of a child after cops saw him walking naked with his baby boy -- also nude -- along the highway.

Hedger allegedly bit his child when deputies attempted to take the naked kid into custody.

In May, Jaron McGee, 23, was accused of steering his 9-year-old daughter in the wrong direction by giving her driving lessons.

She ended up losing control and slamming the car into a tree.

Carron Washington, 20, didn't abandon his two-year-old daughter, but that may have been a better option.

He allegedly fed her bleach because he thought it would help her congestion.

Police say Arthur Langley, 20, left his 1-year-old daughter home alone while he tried to break into neighbors' houses in a Philadelphia suburb.

It might have been better if Dario Napolitano had left his son alone.

He was arrested last June for allegedly kicking his 3-year-old son in the face while at Disney World.

Florida has another bad dad candidate in Elton Jerome Davis Jr., who allegedly abandoned his 18-month-old child in his home to go to work.

According to the police report, the accused left the toddler with a bowl of Cheerios and some orange juice to keep him company.

An unidentified witness later found the child playing with a dog on the side of a busy road.

Now it's your turn: Take a look at the gallery above and then vote for the man who you think is the worst dad ever. 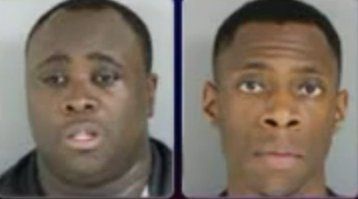 1 / 8
Antonius Hart, Sr. and Jr.
<a href="http://wreg.com/2013/04/12/men-threaten-worker-with-gun-over-fried-chicken/" target="_blank">Antonius Hart, Sr. set a good example for his son,</a> Antonius Hart Jr., when they didn't get the chicken wings they ordered at a Memphis fast food chain. The two drove back and waved an AK-47 rifle at the employees who forgot the order.
WREG-TV