You landed a job interview for a position you really want – but the hiring manager never called you back after it was over. What happened?

It could be that the chemistry wasn’t right, of course, or that the salary didn’t align – but it's very likely you made some foolish and entirely preventable mistakes that derailed your chances.

“Given how competitive it is out there, I’m appalled at some of the interview mistakes people keep making,” says Dana Manciagli, a Seattle career expert who spent a decade at Microsoft and today runs her own executive coaching business.

She and other experts say that even job candidates at the highest professional levels make mistakes – not just those at lower or mid-level ranks. In a still-tight economy with plenty of people competing for positions of all kinds, here are some of the top job interview clunkers:

1. You leave your cell phone on.

When the ring of your phone cuts short a critical conversation about the job you covet, guess what it does to your chances?

One hiring manager in Manhattan says she sees this often – and she’s always amazed when she does. “The job candidates will say, ‘Oh, gee, I’m sorry,’ and reach to turn their phones off. But why didn’t they think of that before they walked in the door? To me, it shows a lack of preparation. It’s also inconsiderate.”

And if you actually pick up that phone or send a text during your interview, as some people do – don’t wonder why you weren’t called back.

2. You’re too focused on yourself.

If you overuse the “I” word during the interview, hiring managers may see a big ego standing in the way of a job offer. “Many candidates talk about themselves ad nauseam, with little or no relevancy to the job opening at hand,” says Manciagli. “Whether this is due to nerves, or a lack of self-awareness, or naiveté – people hurt their chances of getting the job.”

If you can’t clearly articulate how you can help the company succeed or solve its problems, you’re probably not a top candidate. “It’s critical you know the specific skills and background required,” says Manciagli. “This is basic and speaks to preparation, but plenty of people don’t do it. You should say succinctly during your interview, ‘From my understanding of the job, you’re looking for these skills. Here’s how I can help.’ Then be very specific.”

Some people have been out of work so long or are so desperate for the job they’ll say almost anything. That over-eagerness and anxiety, however, is a red flag. “They’ll say, ‘Sure, I can do that,’ to just about anything that comes up during the interview,” observes Michele Woodward, a career strategist in Arlington, Virginia. “The reality is they’re thinking more about paying their mortgage or affording a summer vacation than about the staffing problem the company’s trying to solve.”

People also tend to ramble on and on when they’re anxious. It’s a much better plan to have short, concise answers to common questions prepared beforehand. Once you say them – smile, make good eye contact, and be quiet.

4. You can’t answer basic questions about your qualifications.

It’s one of the most common interview questions: “What are your strengths?” Yet hiring managers say far too many job candidates flub their answers.

“Even at high levels, people will give a rote list of their previous jobs, or cite clichés like ‘I’m a workaholic and like to get things done.’ Not good enough,” says Dana Manciagli of Seattle.

Use this opening to your best advantage. “Companies want to know why you’re a great fit for the job they have. They want details, skill sets, accomplishments. You might say, ‘I’ve exceeded my sales goals every quarter.’ Or, ‘My division brought in five new accounts in six months,’ or ‘We created three new ad programs and drove X amount of revenue.’”

And when you hear, “What’s your biggest weakness?” that’s an opportunity to turn a negative into a positive. Rehearse it in advance. You might say, “In the past I’ve tended to take on too much, but by delegating I’ve been able to accomplish twice the amount.”

5. You’re late to the interview.

“I’ve heard every excuse in the book,” says one human resources professional. “‘I got stuck in traffic.’ ‘I couldn’t find the building.’ ‘The campus is so big I got lost.’” Whatever the case, it means you didn’t give yourself enough time. “I tell clients that if they’re not in the lobby 30 minutes before the interview, they’re late.” It bears emphasis: Allow extra time.

6. You know little or nothing about the company’s culture.

Do some research. Reach out to friends and colleagues in the business. Surf for information. Ask career coaches. Is the company ultra conservative? Do staffers dress in business casual? Learn what you can – then dress for the interview accordingly.

“I can always tell when a candidate hasn’t done basic homework about the culture,” says one seasoned hiring executive, “based on the way he or she looks.” When in doubt, dress up.

7. You badmouth a previous employer.

Negative attitudes attract no one – that’s the bottom line. It’s also a small world. Be careful what you say about previous places of employment, especially when your guard is down. No matter why you left a job or what your experience was, there are diplomatic ways to explain an unfortunate circumstance, even if the atmosphere (or boss, or pay, or company) was rotten. You can say you’re interested in new responsibilities, a variety of challenges, more authority, a different location – or simply that the current job posting appealed to you so strongly you couldn’t resist reaching out. 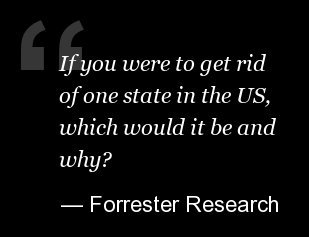