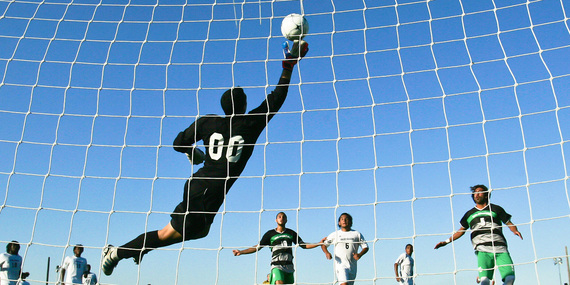 As a three-sport athlete in high school, I knew that no matter where I went I wanted to play competitively in college. I feel incredibly lucky to go to a Division III school that let me play for two teams (field hockey and lacrosse).

While I've had some of the best memories and experiences from being a student-athlete, no matter what division you play, any athlete can attest that being on a college team can seriously suck sometimes, for these reasons and more.

1. You're still expected to be a student-athlete.

The NCAA has different academic eligibility rules for each division, but the overall standard is that each student-athlete must have a 2.0 GPA by their fourth year. Technically, athletes are also not allowed to participate in more than "20 hours" of "countable athletically related activities" per week, but there are so many loopholes that I guarantee most athletes are putting in far more than that.

Even though I genuinely enjoy most of my classes and want to do well in them, it can be nearly impossible with so much time devoted to crazy sports schedules. Talk about stressful.

With practices up to four hours a day, the likelihood you actually go to bed at a reasonable hour is slim. Especially if you're trying to get a passing grade on that Econ exam.

Also a hit to your sleep schedule. Whether it's for lifting or just the slot time your team had for the field that week, morning practices are brutal. If you have a class right after morning lift, you're a goner.

I go to school in Ohio where the weather has a mind of its own. I've played games in 95 degree heat and others in 20 degree snowstorms, (making me question why I didn't choose an indoor sport...). Same story for practice. You'll be lucky if you ever get it moved indoors. The only redeeming factor is that everyone is suffering together. Yay teamwork! 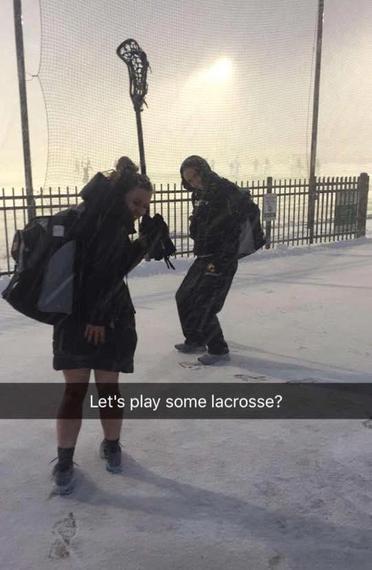 5. You are constantly sore.

I honestly could not tell you the last time some part of my body wasn't sore. It's slightly demoralizing when my friends make fun of me for struggling up the stairs to class when I'm supposed to be the "in shape" one. I HAD 7 A.M. LIFT OKAY!!

6. Not all professors are accommodating.

Games are considered "excused" absences from class, but I swear some professors have a personal vendetta against all athletes. Most of my professors have been great in providing extensions, but for the few who haven't it's incredibly frustrating - sorry my team made it to the conference final and I physically won't be in the state to make the exam?!

7. There's a high risk for injury.

That list doesn't even include all the unsightly bruises and scrapes I've acquired. While I'm definitely more accident prone than most players out on the field, the NCAA reported that on average 12,500 injuries occur each year.

Injuries are going to happen on any team, and often the recovery time is not a quick process. You've got to really love your sport and team to be able to get through months of rehab and sitting on the sidelines.

Whether it's a five-hour layover in the airport or 10 hours crammed in a bus with no wifi, traveling to games sucks. Expect lots of uncomfortable sleeping positions and movies you've watched a thousand times already. Oh, and make sure to watch your data usage lest you want a not-so-pleasant phone call from mom and dad.

9. You are constantly hungry.

Being in season really works up an appetite. No matter how much I pig out at the dining hall, I'm always scavenging for more food. Meal plans differ at each school, but ours are pretty shitty and don't accommodate at all for athletes... So if you're practice runs late, you're kinda screwed.

10. Everything you own reeks.

Equipment, shoes, clothes, everything. I've choked just from standing next to my goalies in practice. No amount of Febreeze can kill the putrid smell. And then your whole team shares a locker room, so smells linger into your clean clothes. So gross.

11. You have zero social life while you're in season.

Both of my teams have a 24-48 hour policy, which means no alcohol 24 hours before a practice or 48 hours before a game. My field hockey schedule consisted of all Friday and Sunday games this past season, which meant one weekend of going out.

Granted, not all teams have this rule, (aka half of the men's teams), but if you're trying to actually be competitive and win a championship, alcohol will just hinder your performance.

12. When your team can go out, it's usually a total shit show.

With limited opportunities to drink during season, the few nights we can get completely hyped up. But by this point, everyone's alcohol tolerance is a lot lower, so most people get completely hammered.

Sounds like fun team bonding until your house is full of holes in the wall, vom is everywhere, and, worst case scenario, your teammate ends up in the hospital. Check-ins and a buddy system is key for accident prevention. If you don't want to be cleaning up for days, don't host.

13. You're representing your school, so you can't be an idiot.

Whether it's what you post on social media or what you say and do with a prospie (prospective student-athlete), as an athlete you're constantly being monitored. There is definitely a double-standard when it comes to men and women's teams, and "presentation" is one of them.

Example: my team was threatened to have funding taken away because we even mentioned that we had a 24-48 policy to a prospie, whereas some of the men's coaches tell their players to make sure their prospie "has a good time" and "get's wasted". Ultimately, you never know how much you're going to get away with, so just be smart. Number one rule: NEVER wear your team gear out to a party.

Yes, the list is long. But honestly, the cons are so worth it. With half a season left to my collegiate career, it's already hitting me how much I've taken being on a team for granted. It's the closest thing to family you can get, and I'm glad to know that when I graduate, I will have some of the most amazing memories and friends to last me a lifetime.

How to Stay Close with Your High School BFF in College

Ain't Got No Type