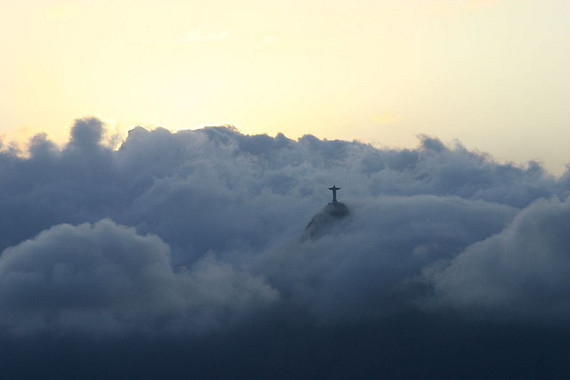 Climate change is one of the biggest and most divisive environmental issues we've faced. Not only is the science scary and the challenge daunting, but it calls into question the very way we live our lives.

Perhaps that's why climate science is causing a schism of sorts among American Christians. On one side you have Dr. E. Calvin Beisner, spokesman for the conservative group, Cornwall Alliance, and former professor of historical theology and social ethics at Knox Theological Seminary, who claims that climate science is alarmist junk. Then on the other side, you have Dr. Katharine Hayhoe, director of the Climate Science Center at Texas Tech University and an Evangelical Christian, who educates people on the dangers of climate change.

With all this rhetoric going back and forth, what's a Christian in the U.S. supposed to believe? Do climate scientists lack ethics when they say climate change is real and dangerous? Or is there some truth to what they say?

Beisner claims that science today isn't based on the moral grounding it should be. "Sometimes we talk about a society living on the moral capital of previous generations, but as that deteriorates you have that moral decay going on," said Beisner in an interview for the New American. "I think we're seeing that in the sciences and particularly in relation to climate science."

He paints a picture of science, a once noble practice, being hijacked by a big-government agenda. The scientists who conclude that climate change is real and a serious problem, aren't basing those conclusions on any "observations in the real world" or the "objective reality" that's out there, he says. They're merely using climate science to further an agenda -- an agenda that wants to make climate change an issue. (And, yes, of course, there is a comparison to be made with Nazi, Germany.)

"In a world dominated by capitalism, climate change is a handy thing to come along," said Beisner. "Climate change can be a reason for furthering a lot of the political ideals that we've had all along, but not been able to show a good rationale for."

For example, Hayhoe is director of the Climate Science Center at Texas Tech University. She researches the regional to local-scale impacts of climate change on human systems and the natural environment by analyzing observations, comparing future scenarios, and evaluating models. Hayhoe's work has resulted in over 100 peer-reviewed papers, abstracts, and other publications, as well as many key reports including the U.S. Global Change Research Program's Second National Climate Assessment; the U.S. National Academy of Science report; and the Third National Climate Assessment.

Beisner may argue that a climate scientist like Hayhoe, who warns of the dangers of climate change, shouldn't be trusted because she lacks a strong moral standing. But that couldn't be further from the truth. Actually, Hayhoe is a devout Evangelical Christian who believes that caring about the issue is one of the most Christian things you can do.

"The people we trust, the people we respect, the people whose values we share, in the conservative community, in the Christian community, those people are telling us, many of them, that this isn't a real problem -- that it's a hoax," Hayhoe said in a recent NPR interview. "Even worse, that you can't be a Christian and think that climate change is real. You can't be conservative and agree with the science."

So Whom Should Christians Believe?

Whom should a Christian believe? Should they assume all climate scientists are just furthering a government agenda when they conclude that climate change is real? Or should they accept the science?

The answer to that question lies in the exercise of free will. God gave us brains to make good choices. It's just important to remember that every choice has consequences.

I imagine sitting in a room. Next door I can hear my neighbor yelling for help. One person in the room with me says, "Oh don't worry. They've shouted for help before and it's turned out to be nothing. There's no observable proof that they're actually in trouble this time." The other person in the room says, "Well, it might really be something this time. Maybe you should check it out."

What would Jesus do? Would he go check on his neighbor? Or would he wait for blood before acting?

EdenKeeper is an information source for those interested in the connection between religion/spirituality and the environment. If you would like to read more visit: www.edenkeeper.org.