There has been a lot of focus lately on the weight and size of women thanks to several recent events. If you missed any of them, I will summarize them for you:

Ralph Lauren's company retouched a model to the point that her body looked emaciated with a large head stuck on it. They pulled the ad and apologized. That same model was fired for being larger than the sample size clothes she was supposed to fit into. She is 5'10", 115-120 lbs., and a size 4. The samples are either a size 2 or 0. Just in today, it looks like the Ralph Lauren people are at it again, with yet another freakishly retouched model who looks to be all head and no body. Then Karl Lagerfeld, who used to be quite fat himself, came out and said, "No one wants to see curvy women." He went on to say that fashion and models are all about illusion and fantasy.

O.K. Illusion and fantasy are fine when you are drawing cartoons, but these models are live human beings. This model does not look healthy or attractive and yet she is on the runway for a large fashion house: 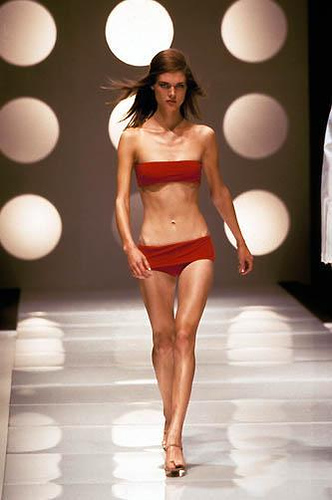 Who finds this attractive other than gay men?

Here is another example of a model on the runway for one of the large fashion houses. Do you find this an attractive example of illusion and fantasy? Whose fantasy includes starving women who are so thin they can barely stand up? 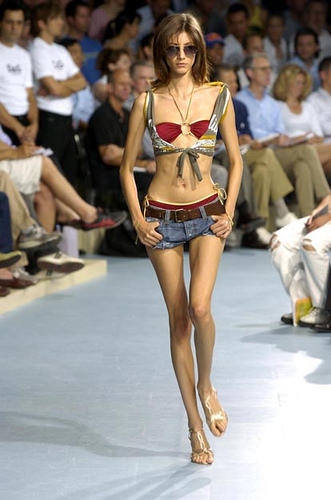 Here is Barbie. Barbie has an extra long neck, very thin legs and a waist so small a human female would have to have a rib removed to look like her. 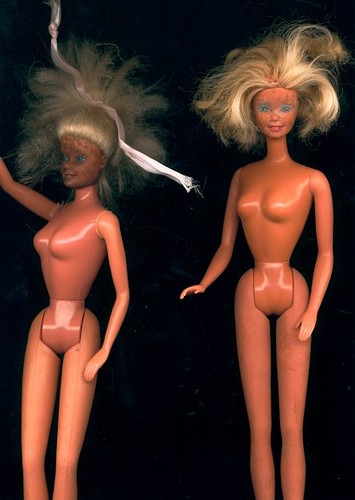 So here is my question to you: Would you buy on overweight Barbie? If Barbie looked more like the average woman, would you want her? Would your kids want her? The average woman in the U.S. is 5'4" and around 142 lbs. She is not modeling anything. She is most likely not an actress, a rock star, or a doll. She would be deemed too fat for any of that. Is it any wonder most of us feel fat?

If normal weighted women filled the pages of say, the Victoria's Secret cataloge, would they sell as many clothes? Are we buying the clothes hoping to look like the models who are wearing them? If so, they must get a lot of returns.

If you'd like to participate in the research for Irene's new book, please take the survey.