I originally came across the melding of fashion and food--unsurprisingly--in Paris.

It was the first time I was visiting the city of my dreams (Leslie Caron's, Gigi, was my favorite movie growing up - the gowns, the jewelry, Gaston!) while I was on a study abroad program with NYC's, Fashion Institute of Technology, in Florence. 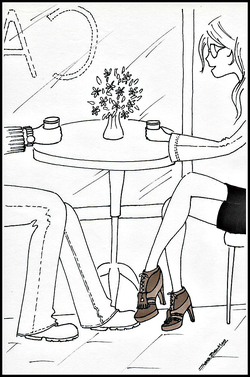 A few friends and Ι decided to jet over to Paris for a few days (or rather, took a long and very unglamorous train ride) to take in the sights, be inspired and, well, window-shop our way through St. Honoré.

While wandering around the city, tired and hungry (but inarguable, very inspired) my friend, Vivien, and I wandered into the Nicole Farhi store. We both thought that our hunger pangs were playing tricks on our olfactory senses when, amongst the various garments and accessories, we undeniably caught the whiff of something yummy - this time, edible!

I don't remember exactly what it was that we ate but I do remember sitting in the restaurant looking around and being completely overcome at how the designer had managed to translate her design sensibilities into... food. It was as if something "clicked" in me and a connection between my loves of fashion and food was born!

Apparently, this connection has "clicked" for a lot of fashion people. From industry heavy hitters such as Giorgio Armani and Ralph Lauren--both of whom have added the title of "restaurateur" to their incredible roster of accomplishments--to models who have taken their love of baking and cooking seriously and have set up food companies.

Take for instance, supermodel Karlie Kloss. A self-professed baker, Karlie launched Karlie's Kookies in September 2012 alongside chef Christina Tosi for Momofuku Milk Bar in NYC. Naturally, Karlie's the best ambassador for the brand - eat cookies and look like a supermodel? Why not? And as if that wasn't enough of an incentive to try their dairy and gluten-free confections, proceeds from sales of Karlie's Kookies have since provided half a million nutritious meals for children around the world through FEED Projects.

Another model who decided to trade being in front of the cameras to being in front of the oven is Elettra Rossellini Wiedemann. Her culinary forays also began in 2012 when she launched Goodness, a pop-up restaurant during NY fashion week. That led to a web cooking show during which Elettra hosted various fashion and entertainment industry insiders cooking and sharing their favorite recipes with her. That has since blossomed into a very successful site, The Impatient Foodie, which has been hailed as "the fashion industry's favorite food blog."

The above are a very small sampling of the fashion-meets-food phenomenon.

It might seem a stretch at how two such different industries have found a way to coexist and, in fact, "feed" off of each other. But perhaps it's not a stretch at all and their connection is a very simple one. Creativity.

Fashion in all its forms is art. Undeniably. But cooking and baking are also art. In fact, all artists go through the same, basic creative process in their minds. Their media are just different. Instead of thinking up a novel way to construct a tailored jacket (think various gussets, darts and intricate pattern cuts) the chef/artist conjures up an innovative twist on, say, roasting cauliflower, or their own interpretation of "the best chocolate cake in the world." The final food served on the plate is the runway show, so to speak. And both art forms involve the senses although, undeniably, cooking triumphs fashion in that department.

But just as taking a better look at a garment reveals intricacies in construction that are invisible to the naked eye, in the same way, the intricacies of food are only revealed through tasting the final product. That's when the behind-the-scenes is truly revealed, a glimpse into the designer/chef's creative thought process.

So, no, the coexistence of the fashion and food industries isn't a stretch at all. In fact, just like when I wandered from the fashion boutique into the restaurant of Nicole Farhi's store in Paris all those years ago, it seems as if the two are merely the opposite sides of the same coin.

Note: the author is in no way affiliated with any of the brands mentioned in this post. The author owns all rights to the accompanying illustration.