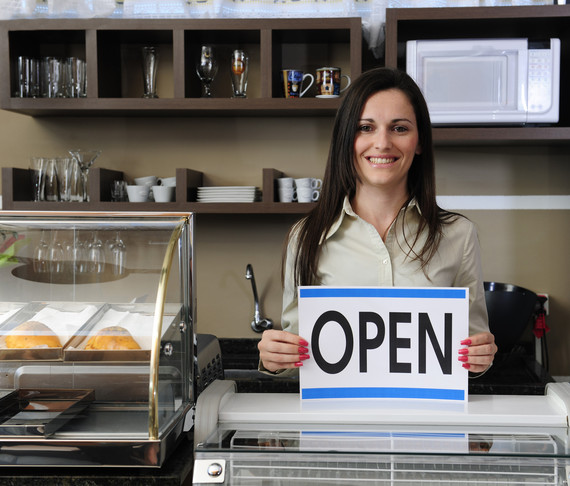 Chasing a career path or building a business that doesn't light you up tends to slowly eat away at your soul on a daily basis. From the moment your eyes open at the sound of your alarm clock signaling the start of another day, to the thoughts creeping in, like... If only I could find a way to make a living that incorporates my passion while creating a life of purpose and fulfillment. And then it happens - you courageously take the leap to follow a dream.

There's nothing like doing a total 180 in your career path. I recently did a change myself, leaving the mundane behind for the exhilaration of building a business that is true to me while relying on true grit to push through my fears that popped up.

They say the life you want is on the other side of your comfort zone. This seems to be true for many women who have walked away from a career or business, some very lucrative, to begin a new path in life.

Apryl DeLancey was in marketing for a decade, had launched her own agency, and was doing quite well. But last year, she realized that marketing was not her dream and most certainly not what she went to school for. DeLancey says, "I got rid of my clients and set out to follow my real dream - marine science. My undergrad degree is Chemistry/Marine Science, and my master's is in Biomedical Science. What the heck was I doing running a digital marketing agency?" She launched El Porto Shark, a startup that aggregates shark-sighting data from a number of public and private sources in order to create the world's first shark forecasting algorithm. Her business continues to grow. DeLancey says, "I'm starting in my own backyard here in California. Today California, tomorrow the world!"

After attending Wharton to get her MBA, Stephanie Klein Wassink was hired by the Wall Street firm Salomon Brothers. She soon learned it was the wrong job for her in so many ways. Even her body was pleading with her to leave. Wassink says, "I was sick constantly and gained close to 50 pounds while working in sales and trading. When Travelers took over Salomon, I was five months pregnant and (thankfully) laid off." In 1998, a student asked Wassink if she would help him with his application to graduate school. She enjoyed doing it. Having worked as an admissions officer, not only had she reviewed thousands of applications, but she understood how to make an application stronger. Wassink says, "My passion for this process grew into Winning Applications, a seven-person college consulting firm and digital startup, AdmissionsCheckup.com."

Sarah Jacoby had a successful career, first as a graphic designer and then worked her way up to a creative director position for a mid-size corporation. She worked long hours, made good money and for the most part, liked her job. Jacoby says, "I was burnt out and felt like something was missing. I just couldn't put my finger on what it was exactly, but I wasn't fulfilled by my career or even the content." Jacoby's passion had always been dance and fitness. She took the leap and decided to open a fitness pole dancing studio, seeing the potential for a great business but also knowing that as an industry it would continue to grow as a fitness outlet for women looking for empowerment. She kept her job for a little while as the studio began to get off of the ground and grow. Jacoby says, "I can proudly say Studio 9 will celebrate its seven-year anniversary in June, and we now have three locations in upstate New York."

Debra Cohen left a successful career as a VP in the aviation business and started a contractor referral business from an old farm table in her basement with just a $5,000 loan from her husband's retirement savings plan, a refurbished fax machine, a computer and a phone. Cohen's business, Home Remedies, a Homeowner Referral Network (HRN) that pre-screens and refers a network of more than 50 home improvement contractors to local homeowners, has grown into a cottage industry nationwide and grossed almost $4 million to date. Cohen says, "After my first year in business I had more business than I could handle. Rather than trying to expand too quickly, I realized that my business concept could be duplicated in other markets, and I could refer work to other HRN business owners rather than handling it all on my own." She decided to document the HRN business model in a comprehensive manual so that she could teach others how to start HRNs of their own. Now, there are over 300 independent HRNs like Home Remedies operating nationwide.

Switching your career is not for the faint of heart at any stage in life, but it's so worth it in the end. Jacoby says, "Sometimes it is scary to know that I don't have a 'regular job' to fall back on. But do I have regrets? Not a one. I am happier, healthier; I spend more time with my family, and I have the joy of watching my 'baby' grow. I have built a beautiful place for women to not only get healthier and express themselves but to also feel empowered and grow their confidence. None of this would have been possible if I had not decided to make a huge life change of quitting a 'safe' career and taking the leap into entrepreneurship."