During a somber ceremony at the White House yesterday, President Obama presented the newest Congressional Medal of Honor to retired Army staff sergeant Clinton Romesha, for his heroics in Afghanistan. It's the nation's highest military medal, and to date only seven members of the U.S. armed services who've served there -- now the country's longest running conflict -- have been awarded the medal.

Recipients of the coveted medal must display "great personal bravery or self-sacrifice" and "conspicuous gallantry" in the line of duty, but for Calvin Spotted Elk, whom I spoke with this weekend, the medal has a different, darker meaning. Calvin is a direct descendant of Chief Spotted Elk, a Lakota Sioux Chief shot while waving the white flag of surrender in a snow-covered field in South Dakota, during the infamous Wounded Knee massacre. He was one of up to 300 unarmed Native American men, women, and infants, slaughtered by U.S. soldiers in the "battle" at Wounded Knee Creek, on the Lakota Pine Ride Reservation in South Dakota, on December 29, 1890. Twenty soldiers who participated in that massacre were later awarded the Medal of Honor.

"To proud members of the Lakota nation, and descendants of the Lakota people who were present, wounded or killed during the massacre that American History has wrongly referred to as "The Battle of Wounded Knee", the Congressional Medal of Honor will remain meaningless," Calvin writes in a petition he launched Monday asking that those medals be finally rescinded from the soldiers who participated in the brutal killings. "The award itself needs to represent true American values. Medals honoring an American massacre of Native people over a hundred years ago are a stain on that honor." 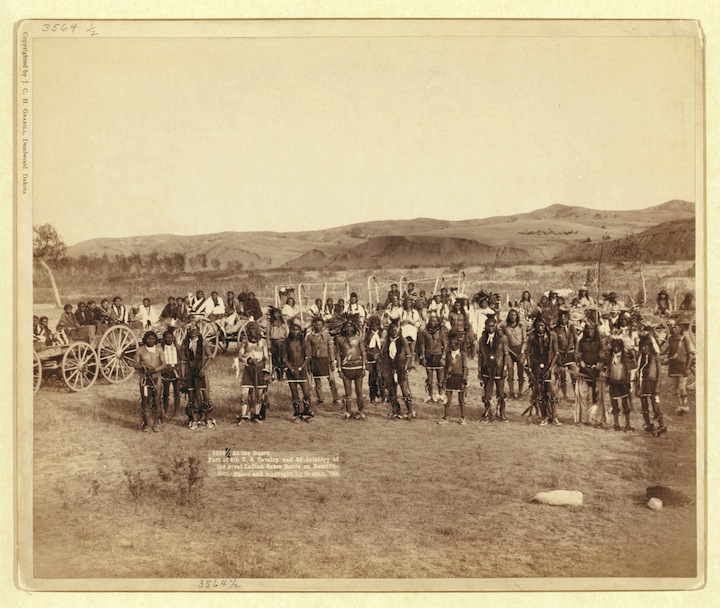 Wounded Knee was a brutal and tragic incident, but it happened over a hundred years ago, and the perpetrators are long dead. Why harp on this now, I ask Calvin? "In South Dakota there are people who still believe that what happened at Wounded Knee was a 'battle' and not a slaughter," he said. "There are kids in school who are still taught these lies today. This isn't ancient history in the west, it informs people's daily lives, and it makes truthful and peaceful reconciliation that much more difficult."

It also lives on in the deep socioeconomic scars riven into the landscape and the communities who live near the site of the massacre. The Lakota Pine Ridge reservation, where Wounded Knee is located, sits in one of the poorest counties in the United States. Unemployment on the reservation runs upward of 70 percent -- average life expectancy is on par with Somalia.

If we can't make right such an obvious wrong, posthumously removing medals of honor from the necks of men who shot women and children in the back as they ran across a snow-swept plain, how can we pursue a deeper reconciling with the abysmal conditions that many native communities in the U.S. still live in?

In a letter to President Obama last year, Calvin wrote:

Mr. President, what happened at Wounded Knee was not worthy of this nation's highest award for exceptional valor. The actions of the soldiers have been justly criticized because this was a massacre, not a battle. This tragedy, for many, remains a blemish in American history. My relatives and I pray for this never to happen again and we pray you will hear our plea to put this to rest. The healing process takes time but through prayer, acceptance, awareness and forgiveness, it is possible. For many of us, acknowledgment of what happened is at the root of our healing.

To stand with Calvin Spotted Elk and others working toward reconciliation, join them in asking President Obama and the Congressional Medal of Honor Society to do the right thing, by rescinding these dishonorable medals once and for all. Sign here and share widely.