On December 29, 1890, at a place called Wounded Knee Creek on the Pine Ridge -- a veritable concentration camp set up to control and suppress natives -- the United States army conducted one of the worst massacres in American History.

The American government had signed several treaties with the American Indians on the plains, promising them food, supplies and protection from furthers encroachment by white settlers. Prominent among these groups were the Lakota Indians. Prospectors and others looking for riches didn't respect the U.S. government's edicts, however. Greed and chauvinism have a way of trumping agreements. Americans encroached, clashes erupted. Many settlers were forcibly removed and some were killed by Indians and the situation grew increasingly volatile. Eventually, the government tried to starve the Indians into leaving by undersupplying them in rations or supplying them with tainted rations.

As the situation deteriorated, an Indian prophet named Wovoka suggested that the Ghost Dance be performed. The Ghost Dance ritual rested on the belief that the messiah had come back to earth as an Indian to unite all Indian believers. The white man would disappear from Native lands, the buffalo herds with all the other animals would return in abundance, and the ghosts of the ancestors would return to earth. Peace would ensue. The government got wind of Wovoka's decision, became nervous and decided to act first. The US moved to arrest Sitting Bull, a famous chief who supported the ghost dancers. The men sent to arrest Sitting Bull killed him instead after he resisted their unlawful arrest. Several agents died in the process.

And yet the Lakota, hemmed in on their reserve, still did not pose a real threat to the US or its interests. Pine Ridge Indian Agent Terry Mgillicuddy recounted the events thus:

"Too much attention has been paid to [The Ghost Dance]. It was only the symptom or surface indication of a deep rooted, long existing difficulty..."

"As regards disarming the [Lakota] however desirable it may appear, I consider it neither advisable, nor practicable... you will succeed in disarming and keeping disarmed the friendly Indians because you can, and you will not succeed with the mob element because you cannot."

"Up to date," Mjigillicuddy added, "there had been neither a Sioux outbreak or war. No citizen in Nebraska or Dakota has been killed, molested or can show the scratch of a pin, and no property has been destroyed off the reservation [by Lakota]."

"The difficult Indian problem cannot be solved permanently at this end of the line. It requires the fulfillment of Congress of the treaty obligations that the Indians were entreated and coerced into signing. They signed away a valuable portion of their reservation, and it is now occupied by white people, for which they have received nothing." Explaining Indian grievances, Miles added that "[The Indians] understood that ample provision would be made for their support; instead, their supplies have been reduced, and much of the time they have been living on half and two-thirds rations. Their crops, as well as the crops of the white people, for two years have been almost total failures.... The dissatisfaction is wide spread, especially among the Sioux, while the Cheyennes have been on the verge of starvation, and were forced to commit depredations to sustain life. These facts are beyond question, and the evidence is positive and sustained by thousands of witnesses." 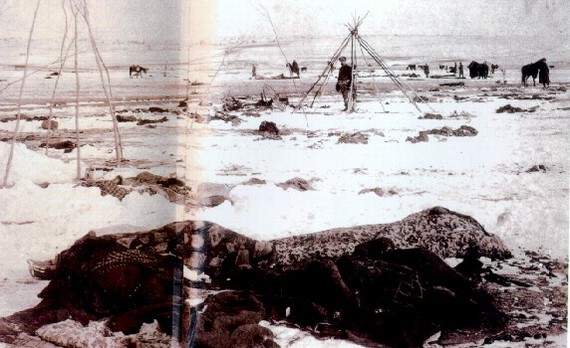 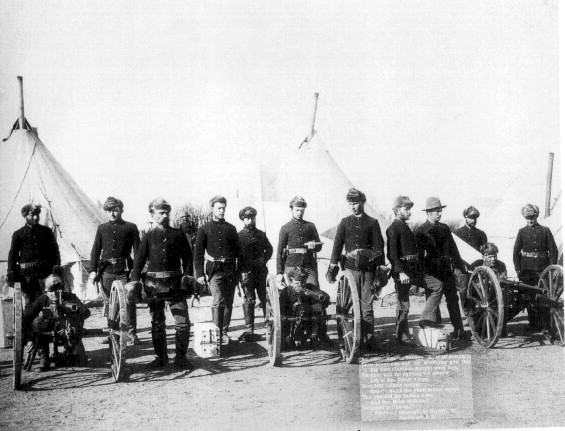 But despite the Lakota calm, the U.S. government decided to deal with the increasingly restive Indian population in a brutal fashion in order to terrorize the rest into submission. These are some eyewitness accounts of the gruesome crimes that were committed:

"There was a woman with an infant in her arms who was killed as she almost touched the flag of truce ... A mother was shot down with her infant; the child not knowing that its mother was dead was still nursing ... The women as they were fleeing with their babies were killed together, shot right through ... and after most all of them had been killed a cry was made that all those who were not killed or wounded should come forth and they would be safe. Little boys ... came out of their places of refuge, and as soon as they came in sight a number of soldiers surrounded them and butchered them there."

Edward S. Godfrey; Captain; commanded Co. D of the Seventh Cavalry: "I know the men did not aim deliberately and they were greatly excited. I don't believe they saw their sights. They fired rapidly but it seemed to me only a few seconds till there was not a living thing before us; warriors, squaws, children, ponies, and dogs ... went down before that unaimed fire." (Godfrey was a Lieutenant in Captain Benteen's force during the Battle of the Little Bighorn)

Hugh McGinnis; First Battalion, Co. K, Seventh Cavalry: "General Nelson A. Miles who visited the scene of carnage, following a three day blizzard, estimated that around 300 snow shrouded forms were strewn over the countryside. He also discovered to his horror that helpless children and women with babes in their arms had been chased as far as two miles from the original scene of encounter and cut down without mercy by the troopers. ... Judging by the slaughter on the battlefield it was suggested that the soldiers simply went berserk. For who could explain such a merciless disregard for life? ... As I see it the battle was more or less a matter of spontaneous combustion, sparked by mutual distrust ".

Approximately 300 Indians were murdered at wounded knee -- 120 were men, but only 40 of those were men of fighting age. That means that up to 260 Indian women, children and elderly were deliberately murdered for the purpose of political terror, on their ancestral land, despite having legally acquired it back from the American colonists. The Lakota fought back, and 25 US soldiers were killed, 39 were wounded.

In an appalling move, over 20 "medals of honour" were given out for "bravery" for this slaughter of innocents. To America's enduring shame, those medals celebrating the politically-motivated murder of innocents have never been rescinded.