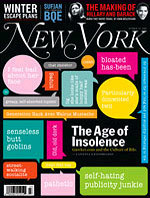 Sigh. I, like everyone else in blogland, dove into Vanessa Grigoriadis' in-depth 6,000-word feature on Gawker, with details under lock and key until it hit the web on Sunday night. I, like everyone else, had opinions, and if Gawker had actually dignified it with a post no doubt its network of, er, very invested commenters would have gone ballistic.

I, like Grigoriadis, can make no claim to objectivity where Gawker is concerned, and there is much I could say about the piece. And I will — after I address the latest piece of "journalism" to address the matter. Today, Page Six published a positively foul item, cheap and weak and venal and worse than Gawker on its meanest day. Grigoriadis had observed that Page Six had been "emasculated by the Murdoch hierarchy after the Jared Paul Stern scandal" — and someone at Page Six apparently did not like that. Here's their comeback, which relies on disproving Grigoriadis through presentation of fact and cogent argument:

First, the hirsute hack asserts "there is little need for the usual gossip players" such as the "emasculated" Page Six now with the omniscient Gawker on patrol. Then, Grigoriadis reports the Web site's founder, Nick Denton, "enjoys thinking of himself as a star-maker and lays claim to creating the personalities that he promotes, much in the same way that . . . Page Six has always said it made Paris Hilton." This column has certainly been blamed for creating Paris Hilton - we covered her first and best - but she would have achieved her greatness with or without us. We never claimed credit. As for us being "emasculated," Grigoriadis ignores that fact that half the Page Six staff is female. The male half might take her someplace private and disprove her theory, but we don't like a woman with a mustache.

Wow. Who doesn't feel violated after reading that? Never mind that any rendering of the Gawker story necessarily implicates Page Six, and the oft-scooping/oft-mocking of — and never mind that it is beneath anyone with a modicum of class to attack someone's looks so nastily (and exaggeratedly, as far as I could tell at the Gawker party, where Grigoriardis mingled in a strapless dress). No, the obviously worst part of that item is the dark implication that the male members of Page Six — Richard Johnson and Bill Hoffman — might display their sexual power were she not so physically repulsive. Does the item come out and say it would be by force? No, but what woman wouldn't be creeped out by such a threat, to be taken somewhere "private" to be taught a lesson. Radar, which has feuded with Page Six in the past, noted as much today (and hopefully was just as disgusted by impugning a woman's looks in a post, which surely they'd never do). The phrase that has come up most often today has been "below the belt." A rather mild assessment, given the hideousness of the implication.

It's sort of ironic that it took this kind of post for Page Six to insert itself in a story of which it was otherwise only a glancing part — almost like the only way to break in was through gratuitous nastiness and — what's that word? Ah, yes — bile. But just as this item is atypical of Page Six, whose zingers are barbed but not often with such poison, so too are the comment excerpts printed on the cover of
New York
magazine, which imply — like the story — that all Gawker has to offer is the vicarious thrill of nastiness. Which just isn't true (though it's far more true with respect to the commenters). That's typical of the piece itself, which is its big flaw: By dismissing Gawker's appeal as merely nastiness and cheap shots, she fails to shed any real light on what has kept the site current and made it a must-read for busy people with plenty of alternatives on an Internet positively teeming with imitators. Now, some specifics:
Advertisement
Advertisement

This is just one blogger's take, from the outsider I was when I first encountered Gawker in 2003 to someone who has attended Denton parties and Balk drinks and seen that pic of Emily Gould in the silver lamé bikini and has been both pleased and irked by alternatively being written about and not written about, depending. So consider that just as you would Grigoriadis' wedding-announcement post — it's just one blogger's opinion. But here's one more: It would have been a much better article with a little less bile...from everyone concerned.

That said, she breaks one piece of real news in the piece: Nick Denton is Jewish? Wow.

Everybody Sucks: Gawker and the Age of Insolence [NYMag]