No matter how desperately certain legislators hold on to their entrenched beliefs that climate change is not happening and that human action has no consequences in the equation, there are plenty who beg to differ. This includes 97 percent of scientists, and military analysts who have warned that droughts and rising oceans will lead to population displacement and global unrest.

Seven Deadly Sins: Wrath -- Force of Nature at Wave Hill in the Bronx brings together twelve artists who have their fingers on the pulse of this issue. The exhibit is part of a linked presentation by the Fairfield Westchester Museum Alliance.

The calm of the 28-acre public gardens, which overlooks the Hudson and the Palisades, is the essence of nature's beauty at rest.

Inside, the tumultuous imagery is a different story.

McGregor introduced the conversation, noting that Wave Hill had chosen to specifically investigate the wrath of nature as, "Nature is so much bigger than us." Guzman remarked that the works presented were primarily paintings --referencing the long tradition that deals with this theme.

Peabody introduced her piece by discussing her concern with weather patterns. In 1974, her town was destroyed by a tornado. While her house was left standing, it led her to question the subjects of fate, devastation, rebirth, and regeneration. 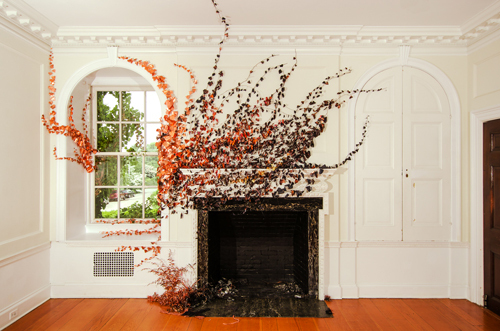 Her site-specific installation incorporates outside greenery, riffing off of the ivy that climbs the exterior walls of the Glyndor Gallery. Using the fireplace and adjacent window as a jumping off place for her sculpture, Peabody explained that she wanted viewers to question, "What happened here?"

Peabody replicates the growth pattern of the outside ivy, while contrasting it with her copper leaves -- each hand-cut and soldered on to the trailing, constructed vines. She achieves a range of tonalities by applying a chemical solution to individual pieces. Using ivy samples from the grounds, Peabody incorporated natural occurrences, such as insects and spider webs. The viewer is presented with a dialogue between the plant life and the human activity of building a fire. In the end, although the sculpture clearly speaks to destruction and devastation, the beauty of the overall piece captures the primal instinct towards life and hope. 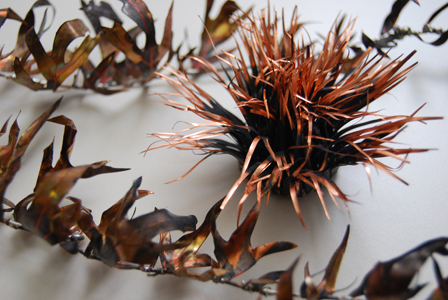 Heffernan, known for her female figures and still life canvases filled with art historical and symbolic references, believes in "the power of an image to affect the viewer." Her landscapes, as she elaborated, present themselves via an internal "image streaming process." Acknowledging the impact of literary sources, Heffernan related that she has been influenced by Elizabeth Kolbert's series on climate change. Heffernan asked and answered rhetorically, "Will nature recover? It may, but will we be here?"

Akin to Peabody, Heffernan has a deep engagement with disintegration and regeneration. "It's the idea of what do we want to keep versus what do we want to dispense with," she said. In Millennium Burial Ground, Heffernan portrays what she defines as a "human decentered world." It is clear that the featured wolves have "agency." There are sub-paintings revealing political subtext, and an encompassing lushness whether the subject is foliage, wildlife, or architecture.

In Self-Portrait on the Edge, destruction and rebuilding co-exist. Military jeeps painted with a camouflage design wind around a path leading to a grouping of boulders. Tiny human figures stand atop the rubble, as what appears to be molded toy figures with guns peek out from crevices. Ladders leading from one level to another suggest upward movement. The uprooted Lincoln Monument and a truckload of broken Buddhist sculptures are part of the wreckage. It brings to mind the current trajectory of ISIS, as they seek to control history and remembrance through a decimation of iconic sculptural figures. 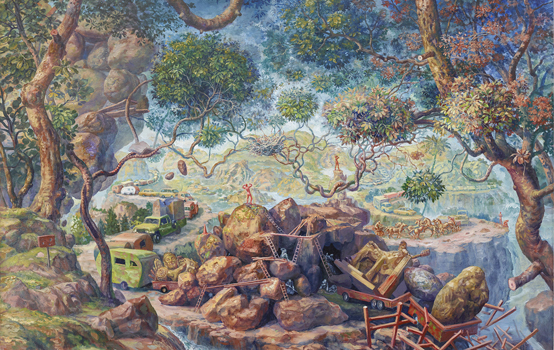 Kent Monkman uses the actions and emotions of animals to convey a new hierarchy as well. In Study for Bad Medicine, bears roam in a suburban neighborhood. Three of them head in different directions. The one standing upright, in the position of a Homo sapien, makes his presence known through roaring. Perhaps it is in reaction to the splayed figure in front of him. A dropped purse reveals scattered items including perfume, lipstick and a bottle of pills. What appears to be a dart gun suggests that the fallen body has been tranquilized and overcome.

Monkman, who hails from Canada and has Cree and Irish heritage, incorporates iconography from both native and European traditions. A flying Renaissance angel breaks up the spatial façade of a residence. Three cubs cling to what appears to be a telephone pole. Yet, the top is clearly carved in the style of an indigenous culture, suggesting otherwise. Close examination shows bushes that double as contemporary infantry soldiers, as well as a native chief. 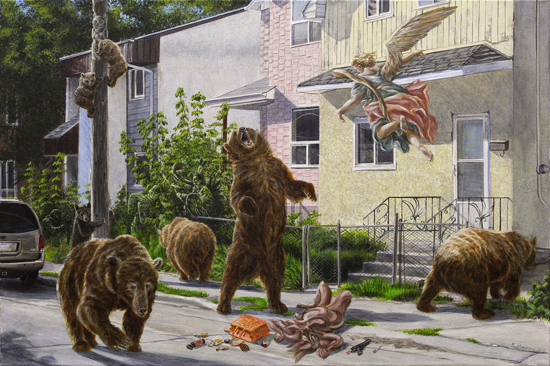 Amer Kobaslija also brings specific personal history to his narratives. Growing up in war-torn Bosnia, Kobaslija portrays the ravages left behind in the wake of catastrophes. He has captured the aftermath of global upheavals from Fukushima to Hurricane Sandy battered Staten Island.

In House Near the End of Kissam Avenue, Kobaslija captures the overwhelm and psychological despair in his view of a home that has been reduced to rubble. Small accents of orange and red underscore the personal items -- among tones of ochres, browns, and bluish greys depicting the structural refuse. 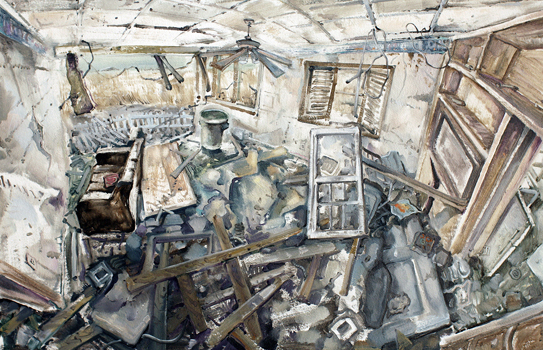 Employing vibrant colors and narrative scope, the cut paper on wood works of Brian Adam Douglas read, from a distance, like paintings. A Sort of Homecoming conveys the destruction and chaos left behind by a weather event. Storm clouds to the left of the perimeter give way to blue skies on the extreme right. There is detritus (some floating) of a pre-existing life -- from tires to a teddy bear doll. A woman braces herself against a remaining wall, the flocked designed paper still intact. Is she holding on or standing firm? Douglas manages to convey both devastation and the potential for a new beginning. 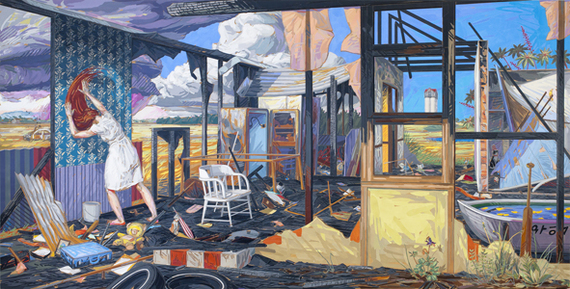 The continuous cycle of birth and death, growth and decay, and ultimately the question of whether the co-existence of nature and humans is viable are manifested in Jon Rappleye's Before the Dawn. Melding the look of a Durer print with the phantasmagoria of Dali, Rappleye surrounds his "creature" with birds, insects, and flowers -- all rendered with intense detail. Although the skull is being transversed by worms, one eye is intact and gazes directly out at the viewer. The flesh of a hand gives way to a radial bone, which in turn becomes a tree-like structure. An owl resides in a crevice, a snake coils from torso to shoulder, and small, rodent-like animals inhabit within the form as well. Is this the future of humanity, or merely the end? 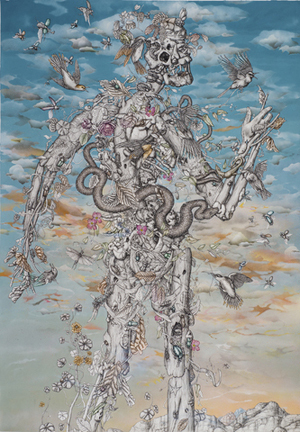 Creatives have become increasingly proactive in the environmental space, visualizing for the public what could be around the corner if policy isn't reset to address current challenges.

Wrath -- Force of Nature proves to be a good starting point for engaging a conversation.