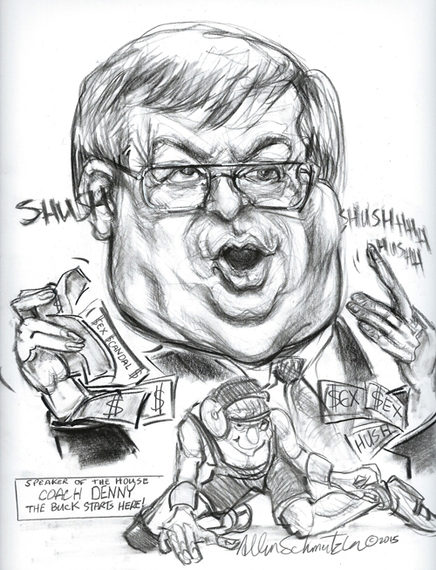 There are two TV shows currently airing on cable that I loved at first but eventually abandoned because they make me sick to my senses and caused my sense of humanity to feel violated. They differ in what dimension of the time-space continuum they occupy, but parallel each by their temper and tone. Both depict a world fueled by folks drive for absolute power with unlimited seedy avarice. Shame and empathy for the casualties rendered into dust clouds of nothingness does not exist, as a pathological worship of power ushers behaviors. The "House of Cards" is "The Game of Thrones." These shows are so cynical and dark with political players caricatured into personas beyond "Nixonian on Machiavellian steroids." These are worlds without shame. These worlds caused me to think that my real time political actors were in a way more palpable. That is, until Dennis Hastert was reborn into current events and my outrage re-awakened.

Sadly, watching the former Speaker of the House, Dennis Hastert's scandal unfold, has me questioning whether TV may be better than I thought at mimicking the secretive, dark and creepy dimensions of political power. This political tale easily could have been written into any episode of either TV show. It can't get much more cynical, more arrogant, more callous, more self-serving, or more disrespectful of the very institution that gifted him so much or the public's trust. This sordid story of violating children and the long game of a cover-up is further evidence that our elite elected class needs a spanking of shame and felonious level punishment to deter their obnoxious and toxic excesses of abuse. It is so hard to imagine what went on behind the curtain of Hastert's Speaker of the House of Cards.

To be fair, the Speaker of the House is not a job for the laid back, or for those looking for job security, or those that refuse to bend limits, twist arms and apply vice-like political pressure. The Speaker's job is like living wearing a wolf's skin lifting pork barrels in a sauna configured like an Ames Room with the thermostat set at a 107 degree schvitz, 24-7, with the requirement to always look cool, formidable and under control. The constant bruising from the persistent wrestling for power and position eventually erodes the effectiveness of the Speaker. The taint of scandal and inevitable departure from the job under suspicious controversies is an occupational hazard, as well as a demoralizing feature for the public as their trust diminishes with each passing of power under awkward and scandalous circumstances. Although the statute of limitations protects against some criminal persecution and punishment, when a government official, especially when in the position of such potent power as the Speaker of the House breaks laws in their climb to power as well as while in office, the ability to seek restitution and punishment should never lapse.

Living several heart beats away from the White House and constantly wrestling with the opposition Party, staying ahead of the 24-hour news narrative, balancing the powers of Congress against pressure from the White House, suppressing restive and rogue and maybe even rebellious factions from one's own caucus means being a rough and tough wrestler and wrestling coach might be a great asset for the Speaker job. Dennis Hastert had that experience. Many have said that Newt Gingrich destroyed the center of gravity in Congress. He retired his position after losing effectiveness, support and being forced out saying he was "not willing to preside over people who are cannibals." Oddly, this was the best description of Mr. Gingrich, and does fair service to describe former Speaker Hastert.

At this point in our nation's political evolution, one essential stands out loud and clear, and will likely play front and center to the upcoming 2016 election. We the people need NOW to be our time. We must wrestle power away from wrestling politicians, hiding behind a "House of Cards" with their sense of entitlement, arrogance, and shameless disdain for the folks that pay their bills. Politicians are our customers, not the other way around. We need a powerful deterrent to topple the House of Cards mentality and bring ethics, honor and integrity back into our political system. Dennis Hastert's Congressional pension must be terminated. Taxpayers must never tolerate paying for a politician's illegal activity. Dennis Hastert needs to be shamed with a scarlet letter, permanently banned from jobs with financial rewards within three degrees of government. He should never make another dime from his wrestling with power and trying to bribe away his lies. The statute of limitations protects him against serious pedophilia predatory crimes. But when under the public oath of trust to serve, and sitting little breathes away from the Presidency, no statute of limitations should be allowed. So it goes in the Game of Thrones at the House of Cards.