The Chicago Cubs' massive Wrigley Field renovation deal inched forward Wednesday when the City Council green-lit a new deal that would give the team more control over night games while reducing the overall number the team can have per season from 46 to 43.

Another part of the deal concerning liquor sales and events on the renovated plaza drew criticism from many of the surrounding residents and was ultimately delayed.

The revised night game agreement allows the Cubs to schedule 35 night games at home for the season and they'll have the option to tack on eight more -- including three on Saturday nights -- if the MLB chooses to broadcast the game, the Sun-Times reports.

In exchange, the team is adding 10 more security guards and free remote parking for 1,000 cars, DNAinfo Chicago reports. To ease congestion in the already busy neighborhood, attendees will be able to park at the to-be-determined off-site location and hop a shuttle to the ballpark.

Several Wrigleyville residents were less than thrilled with the beefed-up number of night games. Area resident Angie McMahon told the Sun-Times, “It would be the absolute worst, worst, time, especially for parking."

McMahon added, “It’s hard enough getting around with the general drinking crowd traffic, but if you add a Cubs game to it, it will just cripple the area completely, especially for residents and for people trying to get to other businesses.”

Others noted residents were aware of the noise, crowds and congestion when they bought property in the bustling North Side neighborhood.

Night games, however, are just one of the concerns residents have in the renovation deal. As the Tribune notes, the Cubs have pushed to set up a "team-controlled" outdoor plaza next to the ballpark that would sell beer and wine and allow live music. On game days fans could take drinks from the plaza to the park and vice versa.

According to NBC Chicago, no decision on the special “outdoor sports plaza” ordinance will be made until the community has a formal opportunity to give their input.

Surrounding bars and restaurants have said the liquor sales on the plaza would hurt their business while proponents -- including the ordinance's sponsor, local Ald. Tom Tunney (44th) -- insist it will make Wrigley a year-round attraction and help businesses avoid the "feast or famine" dynamic currently in place. 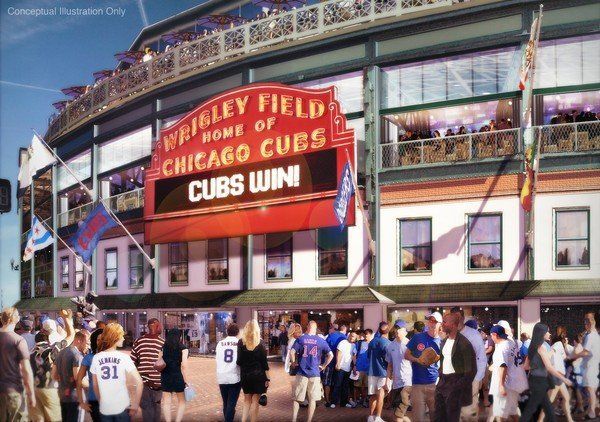