Immigration reform is back on the floor - finally.

And yet, the national symbol of choice - and taxpayer investment - remains the fence. In our increasingly porous world where we travel by foot, flight, and internet, this emphasis on a physical marker of separation calls attention to the forceful act of division.

This last weekend I had a chance to experience immigration through a different symbol altogether - home.

For an immigrant, home is about moving from longing to belonging - or keeping move between these spaces.

Migration is an act of breaking borders simply through movement and in making your self known - by taking up new space - sometimes with ease, more often with great pains. This is to say, migrants often work to move from invisibility to visibility.

Through the Writing On It All project on Governors Island in New York City, I, along with 8 other Asian American poets from Kundiman, created a new monument from the contested spaces of migrations - a visible space of home.

We poets started by sharing stories of how so often, as immigrants, we had not been given space - in a school bus, athletic teams, artists' groups.

On Governors Island, where our nascent country's first codified expression of religious tolerance took place in 1624, we poets examined race and enacted belonging by physically writing on the walls of a home. You can see a slideshow and video of our creations.

As part of interwoven poems, we wrote phrases such as, "strong in my body," "she called me eggroll," "my parents tried to teach me how to be invisible and they failed," "a disappeared flag I give back to my father," "I feel A: Hurt B: Mad C: Nothing," "how much I want to say yes," "i reclaim this house, this old home," "nourishing my singers!," "your deepest sorrow as blood of tomorrow," and "come back to me."

Around the rooms, we moved, writing and drawing. In rotation, one poet read poems aloud, filling the room with our voices and those of other Asian-American poets. We enacted home - one where everyone had space to be, whether in bold writing across walls, tiny print in crevices, or in conversation or echo with each other. We enacted moving from voicelessness to voice, absence to presence - with space for each & all.

Through our creative work, we explored alienation and racism while enacting tolerance in our own hybrid space. Or as Kundiman co-founder Joseph O. Legaspi depicted, "Is This a black Hole or a new Country?" 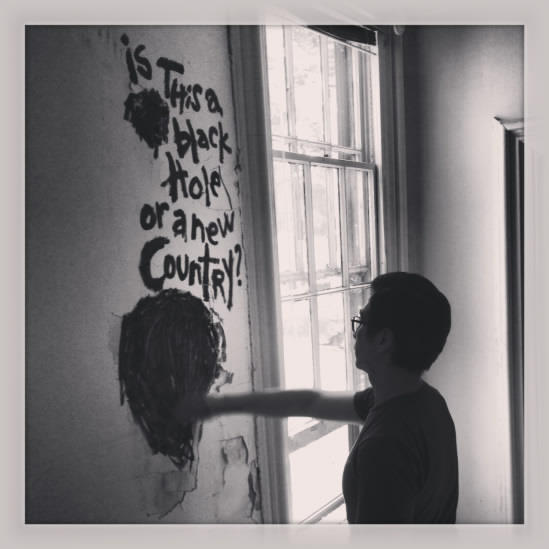 (Image from Writing On It All)

What's more is that in the space of our home for that time period, borders were porous. Not only did we fill up rooms with our own creative outpourings, but we were also joined by 7 "virtual" poets writing on a shared document that was projected across one wall. Even as their bodies were located across our country, their words (amounting to a 19-page group poem!), helped ground and inspire us in our own evocations.

On a physical level, gleefully scribing across walls and a sheet atop a sofa, I found pleasure in the act of mixing paints, etching a space "Open for Poetry." The paints and words formed flags, a peacock's tail, mini-homes - thoughts, colors, and spectrums of emotions intertwining, resonating, echoing.

Or as Kundiman co-founder Sarah Gambito observed, "The house on Governors Island became a totem, a shelter, a lightning-rod for all that we need to say: anger, ambivalence, deep love and courage."

As we found our own space to create - amongst the meanderings of other poets - we created a new model for nation, migration, and community. We proved it was possible both to take up and make space, to have our own space and create space for others to converse with us. Isn't the home a more potent symbol for immigration than the fence - or the modern-day worker plantation? Yes, home may be messier, but its potential is so much more. And it does not cost us our values but emboldens them.

Alexandra Chasin, project director of Writing On It All, witnessed this possibility, conveying, "Language illuminated by the light of the projector, language generated by poets in various remote locations - members of Kundiman's larger community - streamed down one wall in the front room of the double parlor, while one writer read and the rest wrote... The collectiveness of the collective was totally manifest, and at the same time, the intimacy of the collaboration spilled over to everyone in the house."

As does making art. Especially an art focused not on product but process and collaboration. In our individualistic, outcome-centered culture, this space too is an important lesson and possibility.

I feel enormous gratitude that at this moment when we can enact family values and bring back the unity in community, I had the chance to creatively do just that. To take permission as an immigrant. As an artist. To move from dust to dwelling. To enact a shared scripture of place.

May we all go forward and make belonging where we think we cannot - and do so for others as well.

Or as we wrote last week, "New on the skin - our house like comfortable clothes."