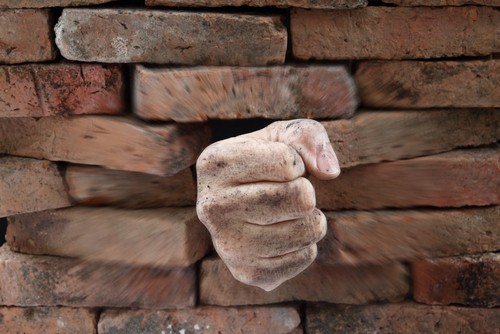 Marathon runners call it hitting the wall. This is the point in a race, usually around the 20 mile mark, where muscles seize up with lactic overload, and your body tells you continuing to run is impossible. As a novelist, I have hit a writing wall at around the 75% completion mark in every novel I've written. At that point, the metaphysical lactic acid buildup in my writing muscles brings everything to a screeching halt and floods me with a desire to throw my computer out the second-story window in my office.

The writing wall of resistance convinces me the work in progress is the worst piece of writing I've ever produced. In my head, I can hear my editor maniacally laughing as he gleefully rejects the manuscript. I have visions of being told to return an already spent advance as I watch my literary career crumble around me in tatters.

I have finally learned not to panic when this happens. It always happens. If I can goad, fool, or guilt myself into continuing to put one word after another, this phase will pass, and the story threads will finally pull together. Like a marathon runner fighting through the wall of physical pain, I have to bull my way through the mental wall until my novelist's second wind kicks in and I find myself speeding toward the end.

It sounds simple - like Nike pompously telling you to Just Do It - but it's far from easy. Finding the gumption to complete a writing project is to enter a battle with all of your mental demons, fears, and phobias.

The following are some methods I've learned to help me - and hopefully you - break through the writing wall and finish a novel.

Fear of rejection can force us to slow down the completion of a writing project. As long as our manuscript isn't finished, we don't have to show our ugly baby to others and risk their harsh judgement.

I once received two rejection letters on the same day. The first claimed I wrote crackling dialogue, but stated my narrative was clumsy and colorless. The second praised my narrative as sparkling while condemning my dialogue as dull and lifeless. These rejections were for the same novel...Talk about mood swings - I went from crushed to indignant to determined.

I still rely on the memory of those rejection letters to strengthen my resolve not to let somebody else establish how I feel about my writing. Turning on a light does not eliminate fear of the dark. Light only illuminates the dark. Similarly, not finishing your manuscript to avoid negative criticism does not stop the fear of rejection, it only postpones the rejection itself.

So, what is wrong with avoiding our fears? Nothing, unless you love carnival rides, but are afraid of rollercoasters; Dread heights, but want to hang glide; Or yearn to be published, but fear rejection.

Change your paradigm of rejection from something to be feared to part of your validation as a writer. Actively seek it out as a sign you are making progress on your way to success. By embracing rejection and sending my twice rejected novel back out into the world, it sold six weeks later to a major legacy publisher who found both my dialogue and my narrative riveting.

DON'T FEAR THE REAPER OR THE REWRITE

English classes in high schools and universities can sometimes do more harm than good. All the stuff about spelling, punctuation, sentence structure, grammar, expected length, double-spacing, and using five words from the current week's vocabulary list takes much of the creative spark out of writing.

Are those things important? You bet, especially if you want to sell what you write. However, paying attention to all those half-remembered rules during a first draft can bring the entire process to a halt.

As former Associate Justice of the Supreme Court of the United States Louis Brandeis is reported to have said, There is no such thing as good writing, only good rewriting. This is a truism, especially when applied to breaking through the writing wall and finishing your manuscript. With your first draft, you must feel free to write what is in your head without consulting your inner editor. Getting the words down on paper is the only thing of importance.

Finish your first draft, then go back and apply all those lessons learned from Ms. Harridan's Freshman English 101. When you rewrite, order will come out of the confusion of the first draft...It is the natural way for the creative mind and the logical brain to work together.

WRITE THE BEST YOU CAN WRITE RIGHT NOW

When I read a seamless novel by a favorite author, I often despair over comparisons to what I see as the patchwork, glue and chewing gum, state of my own prose. I have to fight the urge to push away from the keyboard and abandon whatever I am working on as unworthy. I have learned, however, I can only write the best book I am capable of writing at the time.

I recently had the horrible/joyful schizophrenic experience of going through the manuscripts from a series of novels I wrote ten years ago, preparing them for a reprinting next year. My experiences as a writer and editor over the ensuing years clearly showed me the skill sets I lacked when I first wrote the books. However, the books were the best I could write at the time. They certainly rose to the level of publication in hardcover and paperback, and I never would have become the better writer I am now without having first written and finished these prior works.

The first word we write of a new manuscript will always shatter the ideal version of the novel we envision in our minds. The perfect piece of writing doesn't exist. Our objective should not be to start out being brilliant writers, but to work toward becoming brilliant writers. We must be willing to be less than brilliant to learn the craft needed to be brilliant.

In Part 2, I'll continue to share more ways to break through the writing wall...