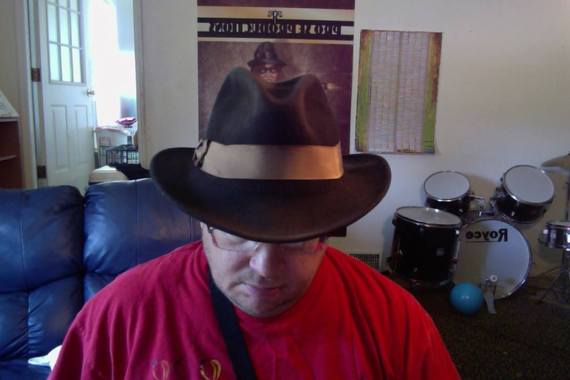 The man in the hat. You see him at conventions everywhere. There he is on Facebook. There he is again on Pro Se Productions' ever expanding website. Who is this mysterious figure who runs one of the largest pulp cartels in the world? He is an unapologetic pusher of pulp - that dangerously addictive concoction of explosive action and imagination with the ability to immediately whisk mainliners away from their mundane existence.

Like the man in the hat himself, you see pulp addicts everywhere - victims of the El Chapo of Pulp - normally efficient, healthy, individuals turned into hollow-eyed, drooping, flesh bags from too much late night pulp, caffeine, and adrenaline. They sit in their figurative work cubicles, pushing mountains of figurative paperwork from inbox to out, counting the hours until they can get their next pulp fix.

But now, the man in the hat is in custody and under the bright lights of the interrogation room - subject to rubber hoses, and guys who only believe in bad cop/worse cop. It's time to get some answers...

Every interrogation starts with a few personal history questions - easy stuff to get a suspect talking. What can you tell us about Tommy Hancock before he became a pulp dealer?

That's one of the nicest things I've been called since starting down this winding dark alley of Pulp. Although I have to say my favorite title, other than The Man in the Hat, was once being called, The Pulp Provocateur - a complicated word, but one dripping with all kinds of interesting connotations.

It's hard to say what I was doing before pulp became my focus. In a way, pulp has always been my focus. I have always been a writer of pulp fiction, even before I knew what it was. However, somewhere along the line, I picked up a Master's Degree in history. Then there was a period of time when I thought I'd like to be a teacher, but after a six month bout of substituting, I figured out how wrong the idea was. I also did some hard time as a college instructor and working in the mental health field - yes, working! I was a juvenile officer for several years, and worked in Juvenile Court in Arkansas in a variety of positions.

Program development was another thing, as was marketing for a bit. Eventually, time doing child abuse investigations and suicidal and homicidal emergency assessments led to working as an attorney's investigator, for which I am still officially on retainer. But now, The Hat and I have finally found the destination we took all those curves and twists to find. Currently, I work full time as Editor in Chief for Pro Se Productions.

Somewhere in the midst of all those tangents, I met my wife Lisa, an angel who didn't mind her knights being somewhat tarnished, and who has managed to put up with me for just short of nineteen years. She has given me my miracle, Braeden (17), my gift, Alex (15), and my princess, Kailee (9).

When did you first get hooked on pulp?

That's sort of like asking Elvis when he first felt the urge to gyrate. In my recollection, pulp has always been a part of who I am. Now, that probably needs some clarification. I don't see pulp as just being the stories that appeared on pulp paper when published in the early 20th Century. I see pulp as being a style of writing - of entertainment - encompassing several key points. The most important of those points, for me, is it's genre entertainment filled to the brim with action and adventure coupled with clearly defined heroes and villains. If you look at pulp that way, then I've always been a fan. I enjoyed watching and reading westerns since I started turning pages at age four, saw Star Wars the night it debuted in 1977, stayed up late to watch detective movies and TV shows like Hawaii Five-0, Columbo, and even stranger fare like Manimal and Salvage One (yeah, the last one will test some memories)...

And we can't forget a real first love of mine - old time radio. My grandfather had given me a white box radio with a light up dial. I used to have to plug it in and hide it under my blanket because at 9:30 - a good 30 minutes past my bedtime - a college radio station in a nearby town broadcasted audio dramas. Monday nights was Star Wars, but the other nights had shows no one my age (8) or even ten years older had ever heard of. Shows like The Six Shooter, Fibber McGee and Molly, The Adventures of Harry Lime, or my favorite at the time, Nightbeat. I was fascinated by these gems from a past era and spent a lot of time as a kid and teenager doing my best to hunt down episodes of OTR shows. Fortunately, that quest has become easier as the years have gone by.

However, if you're asking about my early exposure to actual pulp, it happened at age nine in an Alco in Batesville, Arkansas. On the same spinner rack where, a few short months earlier, I had bought a G.I. Joe comic with my own money for the first time, I found a book someone must have stuck on the rack instead of walking it back to the shelf. It was one of those large Doc Savage omnibus reprints, which made the rounds in the early '80s. Needless to say, it went home with me and I was hooked. After Doc came The Shadow and then a voracious reading of anything similar I could get my hands on.

Coming up in Part 2 of my exclusive interrogation of pulp mastermind Tommy Hancock, we dig deep into the workings of a pulp cartel...

ABOUT THE INTERVIEWER: Novelist, screenwriter, and television personality, Paul Bishop spent 35 years with the Los Angeles Police Department, where he was twice honored as Detective of the Year. He continues to work privately as an expert in deception and interrogation. His fifteen novels include five in his LAPD Homicide Detective Fey Croaker series. His latest novel, LIE CATCHERS, begins a new series featuring LAPD interrogators Ray Pagan and Calamity Jane Randall.
* WEBSITE * TWITTER * FACEBOOK * AMAZON *