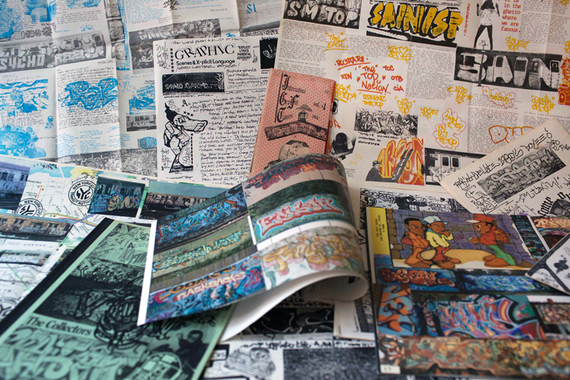 Sacha Jenkins is here to clear the air regarding some misconceptions surrounding the art of graffiti writing, namely that the ever-infallible mass media hasn't any idea what even constitutes as such. Recent headlines have been trolling clicks from a certain artist-in-residence (albeit presumably uninvited) who's had Bloomberg's posterior chapped for the entire duration of October. But there's a critical error in the sensationalism of the way these works are being headlined: it's not actually graffiti.

Cue Write of Passage, a recent six-week educational program that explores the impact of American graffiti art on culture worldwide, curated by Jenkins, a "Writing Culture" historian, and Mass Appeal. The program comprises installations that pay homage to graffiti's origins and influences in the form of rare canvasses, vintage apparel, and more than 100 original graffiti artifacts.

The show boasts subway relics, graffiti writer mementos, photography and artwork, as well as interactive installations that include a tattoo parlor from Mr. Kaves; a subway train and tunnel reproduction; as well as a construction site replica, which was quickly put to work by frenzied markers at the exhibition's opening. The show, which runs through November 23, is open Saturdays at Red Bull Studios from 1 to 5 p.m. Jenkins shares some insight about the current and historical state of graffiti writing, clarifies the onerous misuse of the term, and recaps the highlights from the program.

What does this show represent to both writers and enthusiasts, as well as to visitors who may not know anything about the art?

It educates people and celebrates the history of "graffiti." And I say "graffiti" because the folks who first started doing it in the late '60s, early '70s called it "writing" because simply that's all they were doing. They were just writing their names. There were no pretenses. No one was going into it thinking they were artists. They were just folks who wrote their names on walls and on subway cars.

But in the time since -- what I describe as a language, the root language being born here in New York and Philadelphia -- has now gone on to conquer the world. There are many instinctive dialects communicated around the world, but if you can understand what was created here in America -- I can go to Russia and not know the language but if I can connect with folks who are inside of the culture and are artists, I can understand what they're saying based on what they paint.

One of the things I've noticed is that you make a point of educating people that "graffiti" was coined as a negative term by people outside of the culture.

Right. It's a convenient name for the media to use, "graffiti." Back when it was first reported on in the late '60s and early '70s, there wasn't a level of sophistication even inside of the culture. No one really knew what to call it outside of, you know, writing because that's all it was. It was just simply writing. But in the time since, it's evolved past the term writing, and it's more than just writing and it's more than just graffiti. I think graffiti has such a negative connotation. I think the more education people have, and the more they understand this language, the further away it gets from graffiti and it becomes something else. It becomes an art form that can be respected.

What was one of the most poignant discussions held during your panel series?

We had a graffiti writer and the former Vandal Squad cop who used to chase him. It was their adversarial relationship and what it meant. As the retired police office said, you got more respect as a writer who was being actively pursued by the Vandal Squad. And then the graffiti writer said, "I didn't give a shit about the Vandal Squad. I wasn't doing it for you, I was doing it for the people in my community." Just to have that kind of window into both sides of the fence was something I felt was really important. 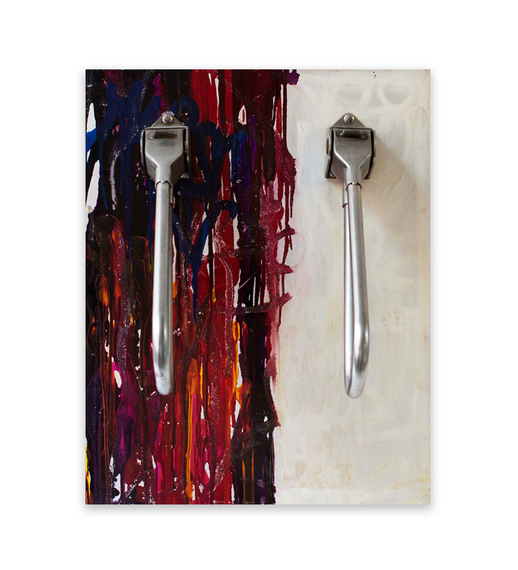 One of the aims of the Write of Passage panels was to clarify that there is a distinct difference between street art and graffiti. That seems to be a common misconception. It's all getting thrown into the same melting pot of subcultural art forms done in the street.

Street art, their work is figurative -- there're rainbows, there are clouds, there are smiley faces. And there is writing incorporated sometimes in what it is they're creating, but there isn't a lot of emphasis or energy placed on the creation of words and letters. With a writer, while there might be other figurative elements to the overall mural or whatever it is they might paint, the core of what they create is the letterform. That is where they're looking to innovate, that's where they're looking to earn their respect -- on the strength of whatever innovation they bring to the letters.

Even though there are fundamental cultural and historical differences between street art and graffiti, those two practices are getting thrown together in such a way that people are beginning to reexamine both. I think of it as sort of a resurgence of what was happening in the '80s with Basquiat under SAMO, Keith Haring, and others, where artists who were producing art on the street were quickly getting picked up for shows on the gallery circuit.

It works in waves. In the early '70s you had an organization called United Graffiti Artists (UGA), and that was the first organization that communicated to these kids that 'you should really think about what you're doing as art. Let's transfer what you're doing on the streets and apply it to a canvas and let's put it in a gallery setting.' In the early '70s there was hoopla and success and more general awareness on the notion that there were people who were thinking about what these people were doing as an art form. Then by the mid-late '70s that died down, and then by the '80s it jumped up again with Basquiat and Keith Haring, and the general cultural boom that was happening at the time. And then that initial boom lasted from like 1980 to 1985, and then it died again. And now there's [this] resurgence.

But I think to be clear, this resurgence is on the strength of street art. "Graffiti," I don't think anyone is jumping up and down with excitement.

Right. And that distinction is further convoluted in media sensationalism of artists like Banksy.

Banksy has been put in this graffiti box. Here's the thing. Banksy comes from a graffiti background. As I understand, he was once a more traditional graffiti writer who focused exclusively on letters. But he doesn't focus exclusively on letters anymore. What he has in common with your garden-variety graffiti writer is that he is applying his art to surfaces that don't belong to him without permission. But, this resurgence and this interest really are attached to street art, not graffiti.

I think that the overall message I'm trying to communicate is whether there is a huge swell in terms of street and graffiti or not, graffiti is going to exist because its become an extension of a lot of peoples' cultural identities around the world.

It was interesting to be a fly on the wall at the opening and watch these guys, particularly some of the older writers, feeling so much nostalgia for their craft.

I think the response to the event was that people had flashbacks to a time where there was this innocence and this excitement about what's going on in that world. I think what we've done is something that's very true to where it all comes from. I think people in the writing community really appreciate what we did. To have the opportunity to have an actual subway car, or a to-scale reproduction of a subway car in a gallery setting to me is the ultimate statement, the statement being what they were painting on the sides of trains is art and should be regarded as such, and here you are experiencing that art in a gallery setting. 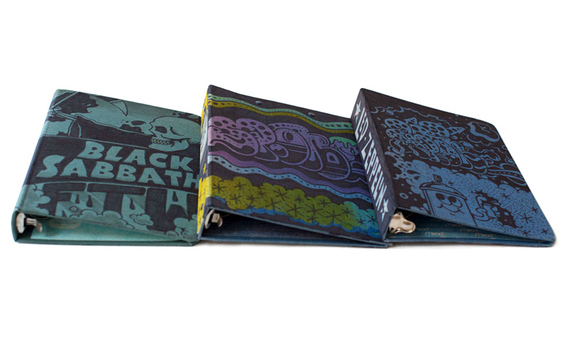 I was wondering how you managed that TMT and TC5 collaboration on the to-scale subway car in the gallery space.

In real life, these are crews who date back to the 1970s in New York City. These guys still paint, and they've been "battling" each other where they paint on these replicas of trains in an effort to see who's got the better train. They've been painting these trains and putting them up on Facebook and people vote on them.

I mean, you ask any of those guys, and they got pretty emotional when they were down there painting the train because even where the train is situated at the space, it's very much akin to the environment they painted when they started painting actual subway cars. And they were getting emotional because A) they were having flashbacks B) if you would have told these guys in 1977 that writing would be were it is today and how it means so much to so many people [they wouldn't have believed you]. Also, the show was curated by folks who were former writers, myself and David "Chino" Villorente. The details that only a writer would pick up on, people picked up on and I think appreciated.

The POST NO BILLS wall that you had downstairs, had you brought it in expressly for the purpose of people being able to paint on it?

Yeah the whole idea of that space was to recreate your garden-variety construction site in New York City. They all have these blue walls, and in white 'POST NO BILLS' always appears. There're always bills on them, and there's always graffiti on them. We wanted to create an environment that was true to what was going on in the streets. It was actually one of the smartest things we could have done because we were really concerned about people tearing up the place with graffiti and it's a really beautiful space. Only one person wound up writing in the bathroom. We were thinking the bathrooms were going to get destroyed. Giving people the opportunity to interact with the exhibit -- I mean now that whole thing is its own work of art that was created in the exhibit by folks who came to see it. 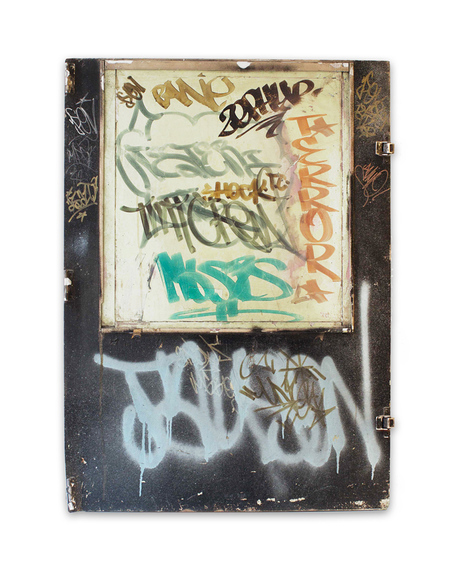 Is anything like this happening again in the near future?

This Write of Passage program is going to happen next year and hopefully the year after that, and as it evolves people will see how far it's come and how broad the influence is. There are so many talented artists from around the world who have a real passion for this language and who keep the tradition.

The show came from a desire to separate facts from fiction, and give people a sense of who the people are behind what some call vandalism and others call art, and to help people understand that there is a science and a rhythm to everything. It's not just random gang members or scribble scrabble on a wall. There's a lot behind this stuff.