Eric Kaplan, writer and co-producer of television's top comedy, "The Big Bang Theory," has written a new book, Does Santa Exist?: A Philosophical Investigation. It is a witty, provocative, and profound exploration of reality, meaning, morality, and yes, Santa Claus. His recent article "What Spirituality Isn't" is a thoughtful, intellectually rigorous, and deeply compassionate essay that concludes with what spirituality is:

1) The spiritual is whatever is conducive to healing the wounds of the world, both individually and collective; so if we are aware of a brokenness within, a lack of integration, injustice, intellectual or political slavery, those things that lead to healing of that brokenness are spiritual.

2) The spiritual is whatever lets us hear the hinting voice hidden within each moment.

In an interview, Kaplan explained that the idea for the book came from a mother who did not want her son, who believed in Santa, to go to the zoo with Kaplan's son, who did not. "She made a decision to give up her son's relationship with someone with someone that is real to preserve his relationship with somebody who is not real." This led him to consider three ways of dealing with paradox, the attempt to reconcile seemingly inconsistent ideas. 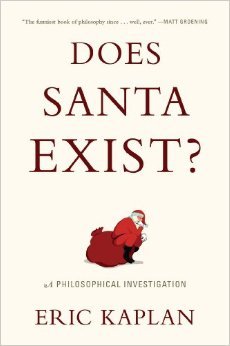 The first is logic. We get all our beliefs as clear as we possibly can and knock out the ones that don't work so that we end up with a completely clear and consistent set of beliefs about life. But there are some problems with a paradox that logic is unable to solve.

The second one is mysticism, which says that everything can be true in some sense. Or maybe nothing is true in some sense because reality is ineffable so we need to experience it but we can't really put it in words. I have some problems with mysticism which I think tends to lead to an authoritarian approach. People who have had a mystical experience think that they know what life is like and other people need to listen to them.

Ultimately I think you get the best of both worlds with comedy. And I think comedy is a way that can allow us to accept two sides of a situation that are contradictory but it also doesn't checkmate the human capacity for criticism so I feel like the marriage of logic and mysticism is comedy.

Where does Santa Claus come in?

Santa is an example of a conscious way of conceptualizing the infinite; a certain aspect of the infinite. It's a way in which the infinite contracts itself so we can have a conscious experience of it. Santa Claus is a way to help us connect to the idea of love, unconditional love.

Is believing in Santa an act of faith?

People have to be quite careful defining faith because if you simply define it as a bunch of beliefs that you're not going to change no matter what the evidence is, then people have faith in all sorts of things that are not good like that their army will win or the stock market will do something. Simply having a belief which you will stubbornly cling to in the face of evidence is not a good thing. It could be a good thing in certain contexts but it's not inherently a good thing. Being unhappy with this sort of hegemonic quality of the Enlightenment project is to sort of counterattack by just saying, "Well, we're going to believe this and we don't care what science has to say." And I don't think that is healthy in part because I think it causes people to ignorantly hate each other and that's not spiritual.

A philosopher that I like is Charles Sanders Pierce. He puts it together with this concept of what love is and he says, "One of the reasons why science is true is because we are actually open to other people and open to new ideas." That's oversimplification but the basic idea is that our quest to be a community of people who treat each other with love is part and parcel with the scientific method. So I have sympathy with that idea. I have relatively less sympathy with people who dogmatically assert claims that are in contradiction to sense because I think you may do that from what you think is a religious perspective but you end up shutting yourself off from the wonder of reality.

Something has always bothered me about Pascal's Wager (that he might as well believe in God, just in case He exists). How can that qualify as faith?

It might count as belief, but it can't count as transformative or good. Simply having a belief ritual to stubbornly cling to in all contexts is not a good thing. It can be a good thing in some circumstances, but it is not inherently a good thing.

Sure they do. Sheldon has progressed but he has a kind of new atheist approach to life. He just believes in science and he has no interest in the humanities or emotions or stuff like that. His mother is a fundamentalist Christian. Those are probably the most well etched approaches philosophically.

You look at somebody like Amy. She may not herself know how it is that she can simultaneously view a brain as something that she experiments on in her lab but also has the hots for a guy because he's so smart. She may not have a story about how those things go together but you and I can write a story where she actually participates in kind of getting a synoptic view.

How do these issues get explored in writing a half-hour comedy for television?