One of the hardest parts of the writing process is getting honest feedback. Close friends and family think nothing of lying in order to spare your feelings about as little as a poem. So they'll sooner tell you that your baby is ugly than that they didn't like the manuscript you've agonized over for two years.

"Like most writers, when I'm done with a book, I'm never sure if it's any good, says Palo Alto-based novelist Keith Raffel. "I am definitely not my own best critic."

A bestselling author via traditional publishers, he invited readers to join him in self-publishing his fifth book, Temple Mount, a thriller in which a Silicon Valley executive finds himself heir to the secret of the lost Ark of the Covenant. Unlike the other 6,149 publishing projects launched via the crowd-funding site in 2013, the Temple Mount initiative offered an "Editor Bundle" to readers willing to invest $80 or more. It included the chance to review the manuscript before publication and make suggestions and edits.

Maris Kreizman, who has overseen Kickstarter's publishing initiatives since March, says of the Temple Mount project, "It was the first time I'd come across a project in which an author specifically solicited editorial feedback from backers." She adds, "Creators have complete control over their projects and this was a creative way to invite his audience in closer."

193 people pledged a total of $18,746, with 57 of them paying for the privilege of editing the manuscript. Raffel was reminded of the scene in which Tom Sawyer, hoping to go swimming rather than whitewash a picket fence, convinces other boys not only to do the chore for him, but to pay him for the experience.

"Instead of paying an editor," Raffel says, "I had editors paying me."

Did it pay off?

Of the 57 backers with editing rights, 25 "took advantage," as Raffel puts it, turning in manuscripts marked with two to 3,500 notes. Among those readers were lawyers, venture capitalists, academics, software engineers, a hospital chaplain and a documentary film-maker--but no one who'd edited a novel before. There was also an emergency room doctor, Paul Hochfeld, a longtime friend of Raffel's and a fan of his work. Hochfeld's previous editing experience consisted solely of his son's high school papers, a process in which his son wasn't entirely a willing participant.

Hochfeld recalls, "I really appreciated the spirit of what Keith was doing, creating a community of people who were vested in the sense of contributing to something that they could take pride in. And I trusted that he wouldn't ask if he didn't want honest feedback; I was brutally honest."

Hochfeld spent more than a month poring over the manuscript. "I thought it was a great story," he says. He was the one with 3,500 notes, however, including "...if you use the suffix '-ish' even once more, I think I will puke." Among the words he flagged were bluish, fifty-ish, pinkish, reddish-brown, and Nefertiti-ish. Raffel was chastened.

When another reader picked up overuse of nod, Raffel realized he was onto something with crowd-editing. "These small tics aren't always found by a single editor," he says. He subsequently gave the manuscript a "nod-ectomy."

Overall, he incorporated about half of the crowd's notes, about the same ratio he has experienced in traditional editing.

"I was kept from making numerous embarrassing gaffes. It really helped to see the characters and plot through others' eyes. One commentator said he wanted to understand better what made the protagonist 'tick.' That one got me motivated for some real re-writing."

Crowd-editing proved distinctly advantageous in making choices: "I had two alternate openings, and the readers helped me choose the one used in the book. It's much better when it's not one person's opinion, but fifty people's opinions."

Temple Mount goes on sale November 2, at which point Raffel hopes to reap the greatest benefit of crowd-editing: "I have my fingers crossed that it leads to a binge of crowd-reading." 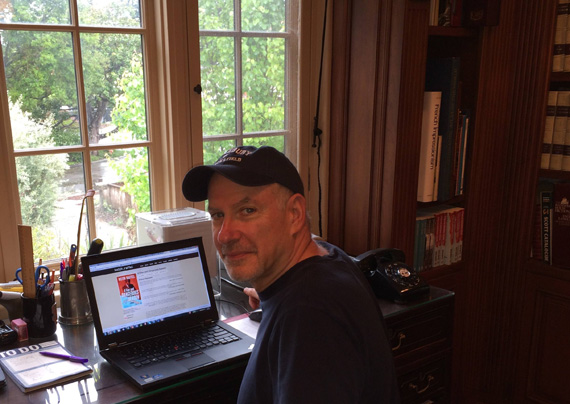 Novelist Keith Raffel collects edits from his crowd of backers