It's overused and clichéd, but it's true.  And if you don't believe in God: Man makes plans, and the unpredictable, chaotic nature of the world throws a monkey wrench into the machinery.

Sometimes Capital L Life happens and we let plans fall by the wayside.  Sometimes we react to said Capital L Life by making more plans.  And sometimes those plans are put on an indefinite pause, with desperate hopes of starting them back up again.  But we make those plans anyway.  It's human nature.  It gives us a sense of control in an uncontrollable world.

There are two levels to what I'm going to talk about next.  The first one is almost superficial: plans for my first fiction manuscript.  In 2009, as I was finishing my first-ever novel, I was making plans for what I was going to do with it.  As the years progressed, the plans would evolve, from the way I was editing and revising the manuscript to the way I was attempting to get my work out there.  After hundreds (and hundreds) of agency queries and a handful of contests, I decided to throw what I had originally planned out the door and attempt a potentially treacherous route: self-publishing.  Or, as they call it these days: independent publishing.

The second level to this is considerably deeper and far more complex.  The second one involves my father.

When it came to planning for the future and my father, I had long since made peace with the idea that the two would be unpredictably mixed.  He was an older father (he was 46 when I was born) and his health left a lot to be desired.  Even as a teenager, I understood that I could never make assumptions about the future and his role in it.  I understood that there were just some things that I would be dealing with at a younger age than the average person typically did.

In some ways, it made his declining health and a Parkinson's diagnosis in 2012 a little easier to process.  Life couldn't throw a monkey wrench into the machinery, because I had decidedly refused to build the machine in the first place.  But that didn't mean it would not affect me.  It didn't mean that going to my parents' house would not become a heavier experience than it already was.  And it didn't mean that his future would not weave its way into mine.

Early in 2015, in the midst of -- and potentially as a reaction to -- one of the more difficult years of my life, I decided to dust off my now-six-year-old manuscript and try at it one more time.  I was in a different place now as a writer and the writing landscape had changed considerably since 2009.  My plans were simple enough: attempt a Kindle Scout campaign and, if that didn't work, attempt the independent route that many authors had found surprising success in.

When Kindle Scout passed on my book, I set out on a new set of plans: the confusing, convoluted, complex, daunting plans of getting your book publishing-ready on an extremely limited budget.  Plans that involved researching cover designs (and design firms), mind-numbing proofreading, beta readers -- plans that involved learning new software and navigating new websites and putting myself out there in a brand new way.

On September 16th -- the day before my birthday -- I released my book to the world.  After finishing the seemingly exhausting set of plans for getting my book out there, I had a new set of plans: plans for immediate and long-term marketing.  Plans for getting my name and my book out there, through whatever avenues would work.  Plans that stretched into 2016 with what I would do next.

Four days after I released my book, I found out my father was in the hospital with pneumonia.

Suddenly, I found myself juggling plans for my book with discussions about DNR paperwork.  I celebrated the one-week anniversary of my book release with a drive to my hometown and a meeting with a lady from hospice.  I juggled emails to book reviewers with emails from family members.  My plans, just like my state of mind, became scattered and fractal.

On September 30th, a week and a half after he was admitted to the hospital and exactly two weeks after I released my book, I got the early morning call from my mom.  And all plans fell by the wayside. 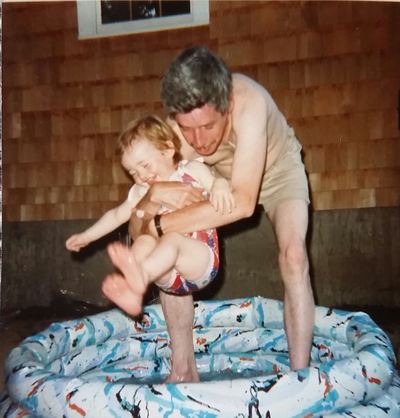 For the first few days, the plans were simple enough: take in what just happened.  Take some time off work.  Go to the beach, even though it was pouring rain.  Go on a drive.  Cry without reserve or shame.  Take in each moment as they came.

And then I started receiving notification emails.  Things that I had set up months prior were slowly starting to trickle in.  In between the emails from family members, here were messages reminding me of the other plans I had in place.

This intricate machine that life had just thrown a monkey wrench into.  The product of plans that had been nearly seven years in the making.

To be honest, it felt wrong to go back.  And when it didn't feel wrong, it felt like I was putting on a song and dance.  Hey, everybody: check out this glowing review from a website.  Check out this book excerpt.  Here's a giveaway.  Here's the link to the Amazon page again.  Let me lace up these tap shoes as my tired feet click out another diddy.

"In three words I can sum up everything I learned about life: it goes on." 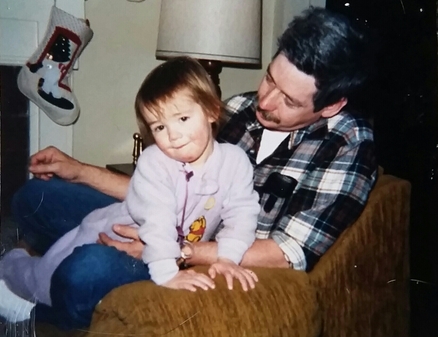 One night, a few months before his death, I got an unexpected, late night phone call from my father.  It would turn out to be one of our last phone calls before his health would slide and decline even further.  During the call, my father told me that he had finally read what was essentially my first published book -- a collection of anecdotes I had written back in 2014 about my time as a model.  He told me how much he enjoyed it and that he was proud to see that I was moving forward as a writer.

Now, I won't attempt to pretend my relationship with my father was anything that it wasn't: it had become very strained over the last decade, and strained further by the fact that he didn't understand why there would be a problem in the first place.  But the one thing I never forgot was just how much he loved and believed in me.

This was the man who swore I could become a famous singer after he attended my first concert choir show.  This was a man who, when the reverend who baptized me noted my first name and made a joke about me becoming the next first lady (like Abigail Adams, who was once a part of that very same church), shouted out, "No -- first lady president!"

Life can be very complicated, but what wasn't complicated was the faith that he had in me.

To add in a second cliché about plans: Life almost never goes according to plan.  I know that, if it did, I certainly would be in a different place in my life.  We all would.  Plans evolve, change, get scrapped, get interrupted.

Because Life -- Capital L Life -- happens.  It throws monkey wrenches into the machinery.  It throws us curveballs and surprises.  And, through it all, we continue on, adapting our plans as well as our hearts and minds.  If nothing else, then because we know that the people we love have faith in us, even if they're not around to express it anymore.

My father never got a chance to read this particular book, but I know he would've been proud of it.  And that bit of knowledge is invaluable -- something I keep with me as I attempt to get back into the swing of things.  The best laid plans of mice and men oft go astray, but that doesn't I won't stop making them.