A fun find this Halloween week is Chez Upshaw, the new film which finds co-leads Kevin Pollak and Illeana Douglas in fine and frolicsome form. The two play the proprietors of the eponymous bed-and-breakfast, struggling hardcore with everything from their finances to their sex life to their whole raison d'être -- until they discover they're uniquely blessed: as hosts who can help their surprisingly willing and well-heeled guests check out, very conclusively, to the allegedly sweet hereafter.

The movie is pretty sweet itself, a rare confectionery of rich, dark comedy topped with frothy, effervescent reflections on this life and beyond, featuring memorable supporting turns from Molly Sims, Don Most, George Coe, Rance Howard, and even Star Wars Episode VII: The Force Awakens' own Greg Grunberg. With a bouncy score (by composers Beth Caucci and John Fee) and a bright palette (from cinematographer Samuel Ameen), it's the jolliest film about death out there (emphasis on "out there") -- probably since Daniel Waters' criminally underrated Sex and Death 101 -- with Chez Upshaw emerging not necessarily in Halloween competition with the garish, ghastly Crimson Peak, but sort of as its wacky, upbeat complement. Go to that house for grimaces; come to this one for grins. 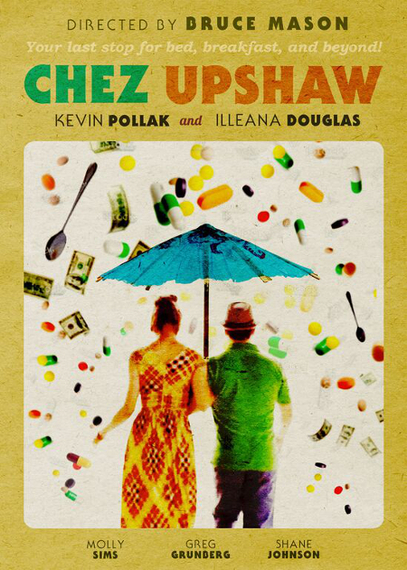 Writer-director Bruce Mason makes his feature debut with Chez Upshaw, and he comes to it with the rare distinction of being the only artist personally approved by Judy Blume to adapt her immortal tale of youth's foibles, Tales of a Fourth Grade Nothing, to the stage. This was the result of working on independent film à la Cassavetes plus loads of theater, leading to a sudden leap from Manhattan to the then-burgeoning Seattle scene, where the Seattle Children's Theatre actually approached him to bring Fudge and friends to the footlights. With a pedigree like that, you can count on Bruce's work making you tilt your head slightly and go, "Wha?" -- in a good way (his next work is the epic story of an exotic dancer yanking the U.S. into the '70s). I spoke with Bruce about Chez Upshaw, asking first how he hooked up with leads Pollak and Douglas, who also serve as producers.

"They came on board fairly late," notes Bruce. "I was working with a casting agent, to cast the other roles, and she kept on mentioning Kevin [for the lead, "Heaton"]. I thought that somebody of Kevin's stature wouldn't necessarily want to be part of this project. So, I wasn't too sure. But finally, I said, 'Okay, let's get together,' and he convinced me over lunch that he was absolutely the right person for the role. And then he asked me, 'Who do you have in mind for "Rita"?' -- and at that point I was already thinking of Illeana Douglas, but I thought I would be deferential, and say, 'Who do you think?' and he said, 'Illeana Douglas.' I said, 'Great!' and he called her up, then and there."

Bruce further expounds upon the virtues of Illeana:

"I'd been aware of her for a while, but it was her work in To Die For that really focused me on her, and what she was able to accomplish. It was very simple, what she did, and it got across a lot. You could really feel her character and her love for her brother and her grief at his death, and her suspicion and righteous anger toward his wife. And at the same time she was so funny. I think she's really a deeply intuitive actress, and that's what I like about her. It's through her eyes or whatever -- I don't want to be clichéd -- but some kind of magic that she has gets there on the screen.

"And by the way, you take what she did in Chez Upshaw, and you compare that with what she did in Cape Fear, right? Boy, is it night and day! What a powerful, powerful actress she is! I look forward to working with her again." 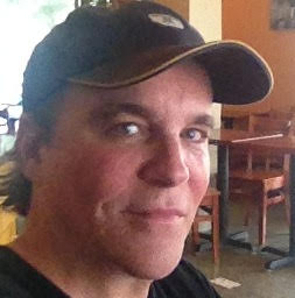 I bring up Ernst Lubitsch and Preston Sturges as possible inspirations for the tone of Chez Upshaw.

"Those are guys that I paid a lot of attention to over the years," agrees Bruce. "Actually, somebody in Seattle used to say I was the Ernst Lubitsch of Seattle theater. And Preston Sturges, love him, read all of his screenplays, seen all of his movies -- obviously -- more than once. Ealing comedies -- the Ealing studios over in England -- have always been a big influence on me."

We pause to note that we're so smart we actually know that Alec Guinness did something before Star Wars. Or even -- Bruce adds -- Lawrence of Arabia.

Crucially, I inquire about how much preparation time it takes to get Kevin Pollak to "Moonwalk" (as he does, briefly but credibly, for the benefit of a woman on the outs, in Chez Upshaw).

"Oh," Bruce laughs, "you ask him. And then he does it. Kevin Pollak is a very facile, immediate kind of actor, endlessly inventive. He found comedy I didn't always know was there. And by the same token he brought a tenderness to some of the scenes that I didn't know was in the writing. Kevin always has very, very clear, crisp choices, that are really fun to watch. He can be very precise. It's just like watching -- I don't know, this will sound kind of weird -- but like watching really intricate clockwork. So to get him to Moonwalk, basically, you just ask him.

"By the way, I think Kevin and Illeana make a hell of a good comic duo. They play off of each other wonderfully. Very different actors, very different styles. And I think they exploited those differences perfectly. They were really a delight." 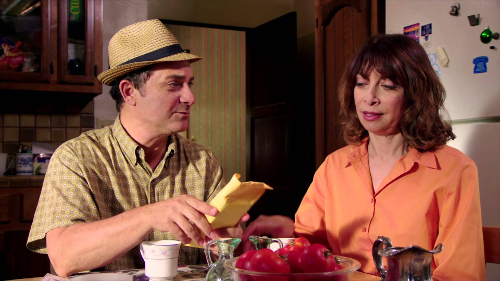 Kevin and Illeana in Chez Upshaw

In closing, I ask about the mansion Bruce and his crew transformed into Chez Upshaw. In the movie's first act, the impressive structure (especially for L.A.) is called "a dump" -- which extracts from me the unfortunate quote for the ages: "That's a hell of a dump! I'd be very proud of that dump!" (Interviewing is not always pretty.) But still, Bruce, what's with the house? Shades of Halloween: Is it in Pasadena?

"It's in Highland Park," the director clarifies. "Actually, it was never supposed to be that -- the script was very specific that it was supposed to be a suburban house. Like, Leave It to Beaver, or where the Brady Bunch lives. That was going to be part of the joke: that there was this whole assisted-suicide machine going on in this suburban house, and none of the neighbors knew it. But they were suspicious of it, kind of like -- what was her name? -- Gladys Kravitz, on Bewitched. She was always suspicious that something was going on, but she could never put her finger on it.

"That was the original idea, and the production designer, Carol Strober, said, 'Absolutely no way. That's never going to work. You have to have a real B&B, and a suburban house like that wouldn't work.' So we looked around, and looked around -- and we found this house, in Highland Park. It had actually been an estate at one time, whenever it was built -- 1910, 1915 -- and it was the Monsignor's house. It had a lot of land to it, it had a tennis court, which then changed as Highland Park changed. The Monsignor moved out. I don't know what happened to him. I don't even know if there is still a Monsignor in L.A.

"Anyway, that estate got sold off, and subdivided, and right next to that estate -- I mean, right next to it -- some people built a Spanish Revival house back in the '20s, which these two guys just recently rebuilt, and they did a beautiful job on it. They built this pool, with all this drought-resistant gardening -- which is where Claire Bird lives [Chez Upshaw's nosy and lascivious neighbor, played by Molly Sims].

"We were very lucky that way," laughs Bruce, pleased with his amusing and strange production about unspeakable things and the nice people who do them for other nice people.

Following a successful festival run, Chez Upshaw is available for pre-order, and is released this Friday, October 30th, on iTunes, Google Play, and Amazon.