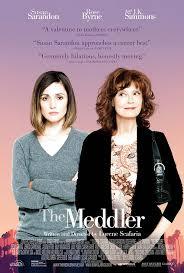 I'm a huge fan of filmmaker Lorene Scafaria, She wrote "Nick and Nora's Infinite Playlist" and wrote and directed "Seeking a Friend for the End of the World," both bittersweet, wise, and tender films with enormous insight about love and loss -- and with impeccably curated songs on the soundtrack.

Her new film is "The Meddler," a bittersweet, beautifully observed story about a mother and daughter, based on her own experience after her father died. Susan Sarandon gives one of her most heartfelt and endearing performances as Marnie, based on Scafaria's mother, who coped with the loss of her husband by becoming just a bit over-involved in her daughter's life. Okay, much more than a bit.

In an interview, Scafaria explained that she even shot the opening scene of the film with her mother in the role to show the producers and Sarandon what she had in mind.

When we spoke about "Seeking a Friend for the End of the World," you said making movies is a form of therapy. Was that true with this film?

They should be. I mean not just for me. Hopefully I didn't just do this for my own closure, but this one was more therapeutic than I even would have thought. My mom was on the set for "Seeking a Friend" every single day but we needed it. That was pretty soon after my father passed away and her mother passed away. It all happened in the same year and half and we found out the movie was green lit while we were at our wake. I remember telling them that the Scafaria women need this. So my mom is a meddler in the best of ways. She's that generous and is that wonderful and loving. She just cares about me, thank God.

This whole thing was an exercise in empathy. It helped me understand how she could be in denial and acceptance at the same time. She would say how everything was fine, or great. You hear that once and you can be like, "Okay." And then you hear it twice, and you realize, "I don't think she basically feels great." She's kind of in a loop. That the cheerfulness is compulsive but it's also what she's like. Marnie is dealing with everything very optimistically, very grateful having had this love of her life and certainly not sure how to move past it at all. There's more closure in the film than in real life, and that's therapeutic, too.

How did writing and directing the film help you understand your mother better?

I think after my father passed away we were just grieving in really different ways. That is what the movie is ultimately about as much as anything else, as much as it's about the meddling mom it's just about grieving. That was the whole reason I wanted to tell the story from my mom's perspective. She was dealing with her own loss but she was also sad for me. That first loss is the biggest, you know? She remembered when she lost her dad. She was my age exactly when it happened. And I just felt for her because I thought, "Well, losing your partner in life is different." I loved my dad so losing him was crazy and so traumatic and horrible but you know even as a child that it is going to happen. I kind of actually did think about it from early on in childhood, you know? And so of course it became a hinge for me but she shared a bed with him and woke up with him every day for forty years so it's a totally different thing.

I love the way you are not afraid to have characters in the film who are just nice. It's too bad we don't see more of that in movies. I loved it when Cecily Strong's character thanked Marnie so sweetly for all her help.

Yeah, I don't mind that it felt a little bit duplicitous up to that point whether or not you're are supposed to be happy for this person. That thank you is everything to Marnie. We can use the people who are the most giving sometimes. I didn't want the lesson to be "don't be a generous person" because obviously in real life and in the film, some things work out and some things don't exactly work out or things didn't work out the way that you hoped.

That is certainly true with regard to the love interest.

To me it was like a reluctant love story. It's about a widow who is not that interested so he can't show up too early, they can't go that far but I like the idea that this woman is so open with absolutely every person, every possibility that she is still not open hearted to the idea of romantic love in her life again and so that will be thing that she would be most reluctant to deal with.

We don't get a lot of movies about a middle-aged woman. Was that a challenge?

For two years plus, people were asking me to make the daughter role as big or bigger than the mother. They also asked for the characters to be younger, the daughter to be in her 20s, the mom to be in her 50s. I mean please. It was having the daughter in her 30's that gave the personal and professional issues more weight. It would have probably made it easier to get it made and financed and everything, but it wouldn't have been this movie. I had to send the script unsolicited to Susan's agent. But once she got on board it was so much easier to get the rest of the cast because everybody just wanted to work with Susan.

And what has been the response to the film?

A lot of women my mom's age come up to me after the different screenings and tell me that it reminded them of their mom. Generations of moms have been caring a lot. And meddling, too.

That is the charm of the mother-daughter relationship. You could be in the middle of yelling and just realize like how silly everything is. It's so rooted in love, which is why we can drive each other crazy. That is why I wanted to be as honest about not only how annoying she could be but also how mean I can be and how you can take for granted the kindest person. You could treat the person that loves you unconditionally the worst. But if you all just understand each other it's okay.

I would be lost without my mother's generosity; the same person who brings me bagels is also the same person who will go to the pharmacy and get me something and drop it off. I really wanted to tell it from her perspective and I think "The Meddler" is a bit of a superhero title. That's her superpower; that she meddles.