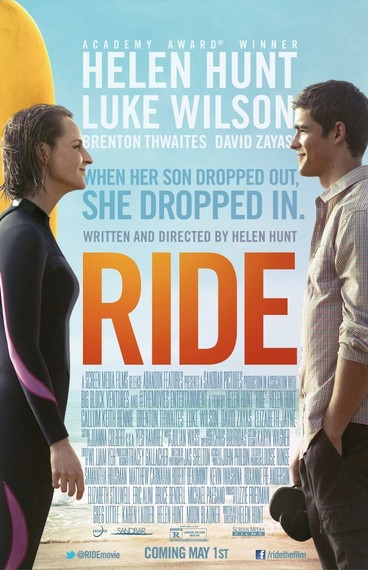 Oscar-winner Helen Hunt wrote, directed, and stars in "Ride," the story of an overprotective single mother from New York who follows her son to California and learns to surf. She talked to me about filming surfing scenes, working with Brenton Thwaites (currently filming the next "Pirates of the Caribbean" movie), and why she keeps writing movies about women struggling to be good mothers.

I kept watching those surfing scenes asking, "Where is the camera?" How did you get those shots?

You have a wonderful chemistry with Australian actor Brenton Thwaites, who plays your son.

He's just a doll. When I watch the move to this day I put my hand on my heart. He is such a lovely, lovely person. He is nothing like the part I wrote. When I met him and he had all this enthusiasm to play the part I really didn't know what to do because I wrote a pasty New Yorker who is all caught up in his head and that was not the person who walked in the door. But he wanted to get close to being that person and I wanted to change the part to embrace who he was instead of having these two people who were very much the same. You had one person all tortured and in her head and another one who didn't know how to manage her without losing himself so he really informed the character just based on who he was.

There's a wonderful line in the film when the character played by Luke Wilson is teaching you how to surf. He says the surfboard is an inanimate object in an ever-changing environment. It is such an apt metaphor for your character's situation, a control freak in an environment she cannot control.

I had a great surf teacher who used to say that. He was just trying to break it down: listen, this thing doesn't move; everything else moves -- like it is not a mystery. If you fall and the board falls in front of you, you don't stop and think, "I know which way the waves are moving. The waves are going to move the board under my head," because when you get in the water you can't think straight.

We had that problem when we were shooting. You get water brain, or at least I do out there, so we would make real plans -- here is how we are going to do these three shots. We would shoot them in whatever way we could and then we would come back in and then sort of dry off our faces and make our next plan.

You played the mother of real-life surfer Bethany Hamilton in "Soul Surfer." Did that inspire you in writing this film?

I was not around for a lot of the surfing scenes on that film, but we had another wonderful water cameraman named Don King, who shot me surfing so at least I could sniff around a little and see that it could be done. They shot that movie on 35 mm film and that really amazes me. Luckily, we are in the digital age. The camera is smaller, waterproof and a little bit more manageable.

Your father is a director. What did you learn from him?

From him I learned patience and kindness. You know the lines in the movie where Luke Wilson says, "We're so lucky?" That's him. My father really knows how to stop and have gratitude for the moment that he is enjoying. And I learned how to act and how to talk to actors. I've worked with some wonderful directors and I think I really notice what things they said to me that helped and which things didn't.

With this movie and "Then She Found Me," you have now written two films about mothers with what we might call boundary issues. What's the best way to maintain good boundaries?