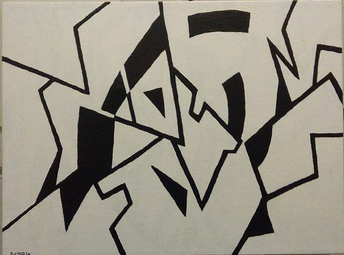 Portrait of Natasha Zouves as a Fragment of Picassoism in Black and White, Acrylic 18 x 24 inches, by Peter Reynosa 2016


About two weeks ago I wrote a Wikipedia page for Natasha Zouves.

Actually, no one writes a Wikipedia page alone. It is a community of people who write and edit a Wikipedia entry. But a Wikipedia article is first started and brought to life by one person. And it is here where the tone is set, where it will be seen as an act of seriousness or the creation of buffoonery, a thing of delightful beauty or an embarrassing eyesore of amateurism.

But who is Natasha Zouves? And why does she get a Wikipedia page?

Natasha Zouves is a broadcast journalist who works as a reporter and morning news anchor for KGO-TV ABC7 News in San Francisco.

But again, why does she get a Wikipedia page? She isn't even famous. I've never heard of her. I know of a lot more anchors and reporters in the San Francisco Bay Area who are more known than her? Heck, she's a kid, just in her mid-twenties. I can think of a lot more experienced and successful broadcast journalists who should have gotten a Wikipedia page before her. This isn't fair.

So is she notable by Wikipedia standards?

Why is she notable?

This is where the confusion comes in. Many people think it is a mystery to how Wikipedia defines notable. But it is not at all mysterious. What Wikipedia defines as notable is not some blurry concept without comprehensibility. It is simply about citation. The most important part of whether a person gets a Wikipedia page is dependent on whether the person writing the Wikipedia page can prove by multiple citations from verifiable (provable) and credible (acceptable) sources that what he or she is saying about this person is true. Being notable to Wikipedia means having articles and places where you can prove by citation that you're notable. The number I minimally strive for is nine verifiable and credible sources. But more than that is much better.

But what kind of sources?

But how do I know what is and what isn't acceptable?

To know exactly what sources are acceptable study similar Wikipedia pages and take notice what sources are allowed. This will help a lot when deciding to use this or that blog or this or that website. And if you use a blog or website (make sure it is an acceptable one), only use facts that are said and avoid rumors and gossip. And always think professionalism. Would your teacher allow this source? Would a newspaper writer use this source? Is this fact or fiction? And even when you do research you can be wrong. But try not to be wrong. And never be wrong because you were lazy. And yes, sometimes you will find multiple sources stating the same truth, except they are all wrong. This phenomenon can be the cause of good research still leading to incorrect information on a Wikipedia article.

And try to make it an easy experience for anyone to see what you're stating is true. Today more and more sources are coming from Internet sites that are one or two clicks away from being verified. Verification of sources that are credible is the meat that Wikipedia wants to see you put on the bone.

Think about it. How do we know Natasha Zouves attended USC? Won an Emmy for coverage of the conclusion of an emotional Amber Alert? Worked at San Diego's KGTV 10News ABC? Works at KGO-ABC7 News as a morning anchor? Said: "Social media and the web is such a big part of what we do"? Easy, we click on one of the links to one of the sources and it takes us to the place where this information was gathered.

And I have learned from personal experience that a lot of times when someone says "I'm all over the Internet and so it should be easy to do my Wikipedia page" this fact often does not help in getting a person a Wikipedia page. Yes, you are all over the web, but no legitimate news stories have been written about you and none of your B-horror movies ever got critiqued by a real movie critic. "But everyone's blogging about me." It doesn't matter. You still need acceptable websites and credible articles written about what you do.

After I did a search for articles and websites that mentioned Natasha Zouves, I came to realize she had enough verifiable and credible sources to get a Wikipedia page written about what she does and who she is. What she does is the part Wikipedia cares most about. But I had to search high and low for some of these sources. I always like to double check my facts if I can. And of course I make mistakes, but never purposeful ones. And sometimes I find something but can't seem to find any proof in any place or article to link it to. Several times her name came up with Marin Academy (a private college preparatory high school in San Rafael, California), and I believe she graduated from the class of 2008, but I have not found an article that mentions this fact. And always try to search for the truth. And do a lot of research. By the time I had finished researching Natasha Zouves, I felt like the foremost authority on Natasha Zouvesiology. "No, I said Zouvesiologist, not zebra zoologist."

And remember if it is on the Internet it does not make it true. But if it did you know her Wikipedia page would be a little more strange and interesting. Are you sure she was in the horror movies Night of the Baby-eater III and Curse of the Mutant Chupacabra and Séance with an Anarchistic Zombie? It's on a website so it must be true. (I have to admit my favorite scene is from her movie Night of the Baby-eater III where she ends up devouring her own child to prevent it from growing up with the family curse. "I eat thee so thou shalt not rise to know the wretchedness of thyself.")

Writing a Wikipedia page about someone can be enjoyable and relaxing. I personally use it as a way of relaxing my mind. And I like helping to promote someone or some subject I believe needs and deserves promotion. But when I do one, I also try to remember to be objective and neutral, very truthful, and use citations correctly. That is what Wikipedia wants. And so give it to them. Learn to play by their rules. And no jokes. It has to be serious. But odd facts can be mentioned, but only if these facts make the regular press and fit appropriately somewhere on the Wikipedia page. And do not allow your Wikipedia article that you are writing to have a bunch of warnings about how it is a stub (embarrassingly too small), lacks neutrality, needs more citations, etc. If you are going to write a Wikipedia article, try to make it a good one.

My biggest problem with her Wikipedia page right now is that there are no photos on it. I wanted to add photos to her Wikipedia page, but I have none of her that are legally mine. Before I would have tried to sneak one on, but I am trying to remember to play by the rules of Wikipedia. If someone would put up some photos of her that they legally own (head and shoulders for infobox and one showing her anchoring the morning news with some of her fellow anchors) on Wikimedia Commons so I or anyone can add them to her Wikipedia page, it would be very much appreciated.

The only tricky part about writing her page was deciding if I should mention the fact that radio station 93.3 held a contest in late 2014 where she won the title "Hottest San Diego News Girl." I decided to put it in because it had made the regular press, but to put it in a section called trivia. And was this sexist? No, because if I were writing a Wikipedia page for Reggie Aqui (he also anchors the morning news with her), I would add the fact that he was named one of "People Magazine's Hottest Anchors" because it also made the regular press.

(Did I tell you how in an alternative universe a day after the radio station announced Natasha was "Hottest San Diego News Girl" she held a press conference where she wore a very glittery white sequined dress and said with a trembling voice and shaky hands and with tears in her doe eyes as she looked into the cameras: "Beauty is my hell, and youth my damnation"?)

(Did I also mention how in this other universe about a week after being named "Hottest San Diego News Girl" she wrote an op-ed piece for the New York Times titled "The Horror of Beauty Shaming"?)

And so why does Natasha Zouves get a Wikipedia page? Because she earned it.