Writing is a solitary pursuit. There's something of the loneliness of the long distance runner in it. It often feels like an extreme sport. Hour after hour after hour of solitude. Time passing quickly if the work is going well, crawling if it's not. Virginia Woolf said, "In solitude, we give passionate attention to our lives, to our memories, to the details around us." Solitude for the writer is hard and glorious and essential. It's like a good marriage: The more you commit to it, never giving up no matter how difficult things get, the more grace and mystery is revealed to you. 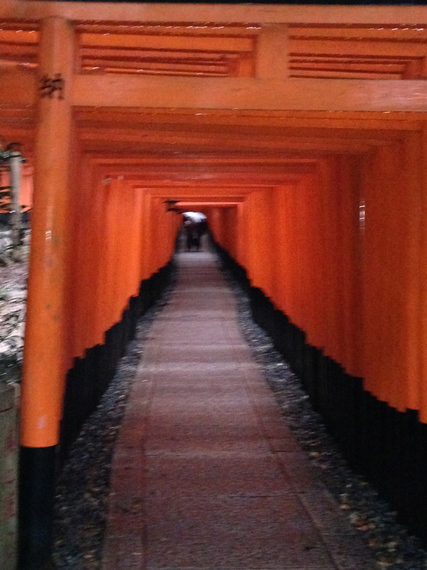 Tokyo, where I've lived for more than 20 years now, is -- surprisingly -- a wonderful place to find solitude. Surprising because it doesn't seem like it would be easy in a city of 13 million. After the morning rush of children shouting goodbye to their mothers as they set off for school, dog-walkers chatting, garbage men tossing trash bags into the grinding maw of their trucks, silence settles over the neighborhood. The stillness is broken only by the cawing of a crow or yowling of a cat (or our dog barking at a crow or a cat); by the ringing of a doorbell as the takkyubin man delivers a package or the squeak of bicycle brakes as one of the housewives on our street returns from the supermarket.

We used to live in an apartment that looked out over Shinjuku Gyoen, a lovely Meiji-era park with traditional French, English and Japanese gardens. From my study I could see Shimono-ike, the Lower Pond, especially in winter when the trees were bare. Children on field trips walked along the path skirting the pond, wearing their yellow school caps and carrying bento box lunches. Their high, excited voices interrupted my work but this never bothered me; instead it reminded me in a pleasing way that I was alone at my desk. It also made me feel a bit like Marguerite Duras, a writer I greatly admire. Duras's house in a village near Paris was old and built of stone, with tilting ceilings, dried flowers in jars, black-and-white family photos, a tall mirror reflecting doorways through doorways, like a reflection of the mind. The house, Duras said, was a "place of solitude, though it looks out... on a very old pond... When the pond is frozen, there are children who come and skate and keep me from working. I leave them to it. I watch them."

Even when I'm not writing, when I'm out and about in Tokyo, I'm mulling over whatever I'm working on, consciously and subconsciously. This requires what I think of as a public solitude, something that's -- again surprisingly, because of the city's population density -- easy to find. In contrast to the States, strangers don't say hi to you or strike up conversations. On packed trains, in tiny restaurants where one table is inches from the next, people create a bubble around themselves, drawing their energy inward to give both themselves and others privacy.

One morning, I learned something new about solitude and the creative process from my then 7-year-old son. I'd gotten up early to write and was nearing the end of a scene when I heard my son stirring. I bore down, hoping to finish before he came to my study but in he walked, our scruffy Westie in his arms, hair standing up at his cowlick, to say good morning. I chatted with him but I wanted to finish the scene. "Honey, I'm almost done," I said. "Would you mind closing the door for a few quick seconds and then we'll have breakfast?"

"Sure," he said with an eager smile. "No problem."

How lucky was I to have a child like this? Even at such a young age he understood the nature of the creative process, grasped that I was not only a mother but an artist.

My son got up and closed the door, then sat on the study floor with the dog on his lap. The two of them gazed at me in utter contentment. Unable to bring myself to ask my son to close the door with him and the dog on the other side, I went ahead and tried to finish the scene, and found that I could. My son and I (and our dog) were alone together and that worked just fine.