As an author whose first book just came out from Tor, a book publisher, you could say I've achieved exactly what I set out to do. And I'll be real: I set out to do it a long time ago. This is not one of those instances when the author takes up writing on a lark and a novel comes out. If only. It's more like, when I was a teenager I decided to start taking seriously this dream I'd always had. I was already thirteen, it was time to get moving.

Maybe it's because I was living in Jerusalem in the mid-90s and fully convinced -- not entirely without reason -- that I wouldn't survive high school. (Buffy was to have incredible resonance, years later.) Being a kid, doing things like having fun or whatever, was a waste of time when life was short. (Plus, being in a class of kids who don't speak your language is not that conducive to having fun either.) So I did two things. I read a lot, and critically. Whatever I read, I picked apart. I looked at the things that worked and tried to figure out why they worked so well. Sometimes I couldn't figure it out, so I just reread those glorious sections repeatedly, as if to absorb them into my bloodstream. (In retrospect, this means I can open my old notebooks at random and be like, "Right, that's when I was reading Dune.")

Because another thing I was doing was writing my own novel. And I worked incessantly. By the end of high school I had completed the first volume of a projected epic fantasy trilogy. I had written it longhand in a series of notebooks. Teachers knew to be suspicious of these notebooks and occasionally they were confiscated.

Eventually I was to give up on the high school novel, dismissing it as too juvenile. I started a new one while still in college. That novel, in the course of years, became Last Song Before Night. 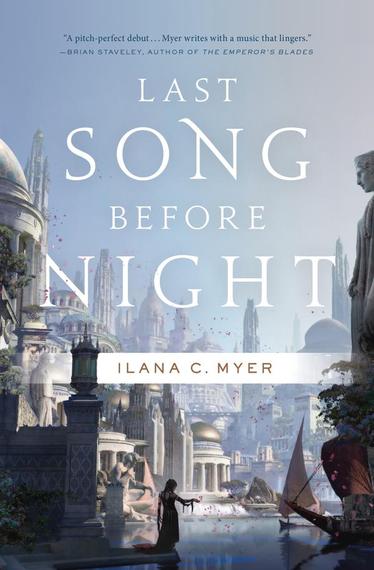 So this is great, right? I did it. I put focused effort into achieving my goal, by developing the skills necessary for that goal, and succeeded.

Fast-forward to Book Expo America, when I and three other debut authors had the honor of being on a panel hosted by John Scalzi. Except this wasn't really a panel. It was a game, for the general public, of "Would You Rather?" We would get questions and need to answer them, cleverly, on the fly.

This was a foretaste of what it means to launch a novel out into the world. My calendar for October was a series of public appearances, readings, another game of "Would You Rather" with Scalzi at New York Comic Con, and -- incredibly -- a New England book tour with Fran Wilde and Seth Dickinson where we visited five bookstores in five states in five days or something like that. The idea is to answer questions, and be witty, and hopefully impress the ever-loving hell out of everyone.

I did not do a single damn thing in my life to prepare for this. And it's made me reflect on this dissonant quality to being a writer: what makes us excel at our work, what gets our books to the level of being publishable, involves being alone, a lot. No matter how many workshops you attend, ultimately the work only gets done when it's just you and the page. Or just you and the necessary act of reading. All of it intensely alone.

And now my success, or at least a good fraction of it, might hinge on how scintillating I can be in public appearances. I've been thinking back and realizing that authors' behavior at their events has occasionally influenced my interest in their work. If an author seems brilliant and confident at an event, I think we are programmed to expect that same acumen reflected on the printed page.

But there's one thing I'm learning: Experience helps. With five readings behind me, I'm starting to enjoy doing them. And at a panel at New York Comic Con, I was surprised to find that I was not nervous beforehand. I knew all eyes would be on me and I would be expected to make clever responses to surprise questions, but there was a corner of my brain, newly awakened, that said, "You've been here before. You've got this." And also: "Have fun." Because hey, I finally have a book out. That is pretty awesome.

Now I'm not going to say it was all flawless, but it was better. And maybe that experience will pave the way to the next appearance being better. And the next one.

Recently I went to a consignment shop and found a designer red dress on sale for a ridiculously low price. Not deep red. Not maroon, which I've been wont to wear in the past. Shocking, fire engine red. The kind of thing I'd never have worn before, favoring instead more modest shades of blue or purple or green. I bought it.

I haven't prepared for this, and there are going to be moments when a witty comeback eludes me, or people notice my hands shaking (this happens, especially if I haven't eaten), or I am simply stumped for a response for several seconds (this has happened too). But if you see me at these events, and I am wearing the red dress, you'll know I'm wearing it to remind myself that the time for solitary communing has passed. It's time to be out in the world and visible among people, at least for now. I have a book out, the thing I've worked toward my whole life. This is no time to hide.