The GOP platform mentions China 15 times, including these passages:

Our serious trade disputes, especially China's failure to enforce international standards for the protection of intellectual property and copyrights, as well as its manipulation of its currency, call for a firm response from a new Republican Administration...

Some governments have used a variety of unfair means to limit American access to their markets while stealing our designs, patents, brands, know-how, and technology -- the "intellectual property" that drives innovation. The chief offender is China...

I'm sure there are plenty of valid complaints about China's enforcement of patents and copyrights, but of course, you can make complaints about any country's enforcement policies, including the U.S., where copyright infringement is extensive, and patents are routinely ignored in many sectors of the economy, including software (and often for the best, given the nature of many granted patents). But more important, the GOP really misses the point about an important fact. China has dramatically changed its approach to the patent system, and is on track to be the number one owner of patents. As noted by Joff Wild last year:

The US does not grant more patents than anywhere else. China does. By a country mile. In 2010, SIPO made over 800,000 grants, the USPTO made 219,614 grants. Of course, around 85% of those Chinese awards were for unexamined design and utility patents. . . In any case, as the Chinese economy grows and SIPO hires more examiners, soon enough it will supersede the USPTO in examined grants as well.

China's central patent office has quickly become the busiest in the world. Last year, for the first time, there were more domestic patent applications filed in China than in any other country, including Japan and the United States.

This might not make for convenient political speeches in 2012, but at some point political figures will have to address the scenario described by Peter Yu in The Washington Post's story:

Analysts say foreign firms can expect to see many more lawsuits coming from China, turning the country into a new front in the global patent wars.

"Think about a U.S. firm that produces all its products in China," said Peter Yu, a professor at Drake University Law School who has also taught intellectual property law in China. "If a Chinese firm is able to get an injunction over the production of that U.S. firm, the firm would all of a sudden no longer have any products."

Looking forward, the rhetoric about the need for stronger and stronger enforcement of patent rights, including hefty damages and injunctions, will seem outdated and under-analysed on a topic that really matters. 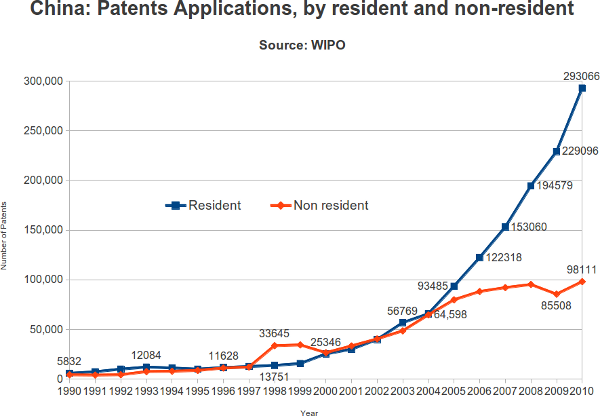