For those once wrongfully convicted of a crime who have been exonerated, time is once again not on their side. A federal law that allows them to recoup taxes paid on any compensation they received for their wrongful convictions is about to expire, and yet many of them don’t know the law exists or how to take advantage of it. But one man has made it his mission to set things right.

The National Registry of Exonerations lists 1,928 men and women in the United States since 1989. They served, on average, about nine years in prison and, collectively, lost 16,000 years behind bars. Some had been on death row. Some were minors when they were convicted or had intellectual disabilities. All of them had been swept into a justice system that failed them.

When released, these exonerees often are given little assistance as they try to readjust to freedom, update job skills and reenter society after years, even decades behind bars. Thirty-one states, Washington, D.C., and the federal justice system have enacted some form of compensation for the time spent unjustly caged. But those statutes vary wildly in terms of who qualifies and what is offered. The vast majority of exonerees do not receive meaningful compensation for having their lives derailed.

And many of those who had been compensated, either through a state law or a civil rights suit, faced an additional burden: paying taxes on that money. For years it was unclear if they were obligated to pay taxes on the compensation, but President Barack Obama cleared that up in 2015 by signing the Wrongful Convictions Tax Relief Act, which prohibited the federal government from taxing compensation paid to the wrongfully convicted. Retroactively, it opened the door for all exonerees, no matter the year when they were compensated, to request an IRS refund of any tax, interest and penalties paid on that money.

But there was a problem: There was no mechanism for notifying those eligible for a refund, and for anyone who had paid taxes prior to 2013, the law provided only a one-year window, which expires Dec. 19, in which to claim a refund.

All taxpayers, including exonerees, have three years from the date they originally file their tax return to file an amended return to get a refund. That means that exonerees who paid taxes within the last three years are not affected by this deadline. It does affect those who filed taxes more than three years ago and are eligible for relief, but most of them aren’t aware that the law has changed in their favor.

That’s where Jon Eldan comes in.

“One year was an unnecessarily short and rather unrealistic deadline, considering the difficulty in notifying those affected,” said Eldan, an attorney in Oakland, California, and founder of the nonprofit After Innocence. “There is no comprehensive list of the exonerees who received money in connection with their wrongful conviction, let alone the relatively small subset of them who paid income tax on that money. The only way to be sure would be to call them and ask. So I have been trying to identify as many potentially eligible as possible, track down their contact information, let them know about the change in law and provide free assistance to those who need help filing.”

Eldan’s After Innocence provides free post-release assistance to more than 300 exonerees nationwide. Its focus is on ensuring that these men and women have access to and actually use the health care and social services they are eligible for and that they have legal assistance for any post-release problems.

“At the end of the day, most exonerees who received money did not end up paying income tax. But some did. And those are the ones who were to benefit by making the law retroactive,” Eldan said.

He explained that the change in law was long overdue. “I think that when we compensate exonerees, we should be making amends for their loss of liberty, not by providing them the income we think they would have otherwise earned.”

That’s exactly how exoneree Antoine Goff, an After Innocence client, feels, too. Goff, if the IRS approves his application, may receive more than $60,000 in taxes he paid, plus interest, on part of the compensation he received in 2009 as part of a settlement of a civil rights lawsuit. It’s money, Goff says, that is rightfully his and would help him get back on his feet.

“I feel as if the American system has railroaded me, and I deserve every penny that has been given to me in compensation ― even though you couldn’t put any monetary value on my situation anyway,” said Goff, a Californian who was convicted for a 1989 murder he didn’t commit. Goff served more than 13 years in prison until he was freed in 2003. “They shouldn’t take a dime away from me on that. They owe me that. Period.”

For others, the refund process is more complicated. Take the case of Julius Earl Ruffin, a Virginia man, also an After Innocence client, who was convicted of rape and spent more than two decades in prison until DNA evidence linked the crime to another man. He was freed in 2003. Ruffin told The Huffington Post that he received about $1.3 million in compensation from the state of Virginia. A portion came in a lump sum, with the rest scheduled to be paid monthly over 25 years. Ruffin has been paying taxes on those monthly checks, so to get a refund, he will need to file a separate amended return for each of the last 12 years.

Tax refunds aren’t the only issue at stake. Some former inmates who have been compensated, like Larry Peterson of New Jersey, have massive unpaid tax bills. A lien has been placed on Peterson’s home for $160,000. If the IRS approves Peterson’s application, that tax bill, and the lien it created, will be canceled.

“It’s just hell going through this,” Peterson said. “This is supposed to be America, yet innocent people are being robbed by the system that is supposed to be protecting us and fighting for us. They’re robbing us.”

Eldan has been working day and night for the better half of a year to try to identify, contact and assist as many of the more than 1,900 exonerees who appear in the National Registry of Exonerations as he can to guide them toward any tax relief they may be eligible for. Using data compiled largely from media reports that the registry tracks, he identified about 750 people who received some form of compensation for being wrongfully convicted. But the registry does not compile contact information for those on the list, so Kroll, a large corporate investigations firm, is donating its help, and law students from The College of William & Mary and Stanford University are also digging up contact information. When Eldan does reach eligible exonerees, he can refer them to the Reed Smith LLP law firm, which coordinates free assistance for filing refund claims.

Eldan so far has contacted more than 330 wrongfully convicted individuals nationwide and identified nine who may qualify for tax relief. “We knew this was like looking for a needle in a haystack. But if you are that needle, you would not want to miss out on the opportunity for a refund.”

In a letter that twenty-three innocence organizations, including After Innocence, sent last week to Reps. Sam Johnson (R-Texas) and John Larson (D-Conn.), who introduced the tax relief legislation, the groups indicated that Eldan’s effort will not reach all of those he has identified as having received compensation nor the 1,000 more whose compensation status remains unknown before the Dec. 19 deadline. Along with two dozen other organizations who work on behalf of the wrongfully convicted, he has urged the congressmen to extend the deadline by two years.

When contacted by The Huffington Post about the letter, both Larson and Johnson pledged wholehearted support for an extension of the deadline but did not yet have a concrete plan. Both criticized the IRS for not providing tax guidance on the law until just this last summer.

“Unfortunately, the IRS took six months to release its guidance,” Johnson said. “This delay penalized the very folks who deserve this tax relief. But they shouldn’t pay for the negligence of the IRS. That is why we support an appropriate extension of the deadline for these innocent men and women.”

Larson said he will work with Johnson to push for an extension. “Those who were wrongfully convicted deserve our assistance and support,” Johnson said.

“I believe,” Eldan told HuffPost, “that Congress intended in good faith to make this remedy available, and we’ve provided ample evidence that, after very diligent efforts to reach these people, more time is necessary to minimize the chance that any will miss out. To do anything other than extend the deadline would be to frustrate the very purpose of this provision in the law.”

Eldan, whose work is focused on helping those who have paid a terrible price for our criminal justice system’s errors, said that it’s just not clear how many more exonerees are eligible for refunds under this law.

“But if Congress provides the additional time, I will keep trying to find them and help them.”

For The Wrongfully Convicted, Time Runs Short To Get Tax Relief
Aging Inmates 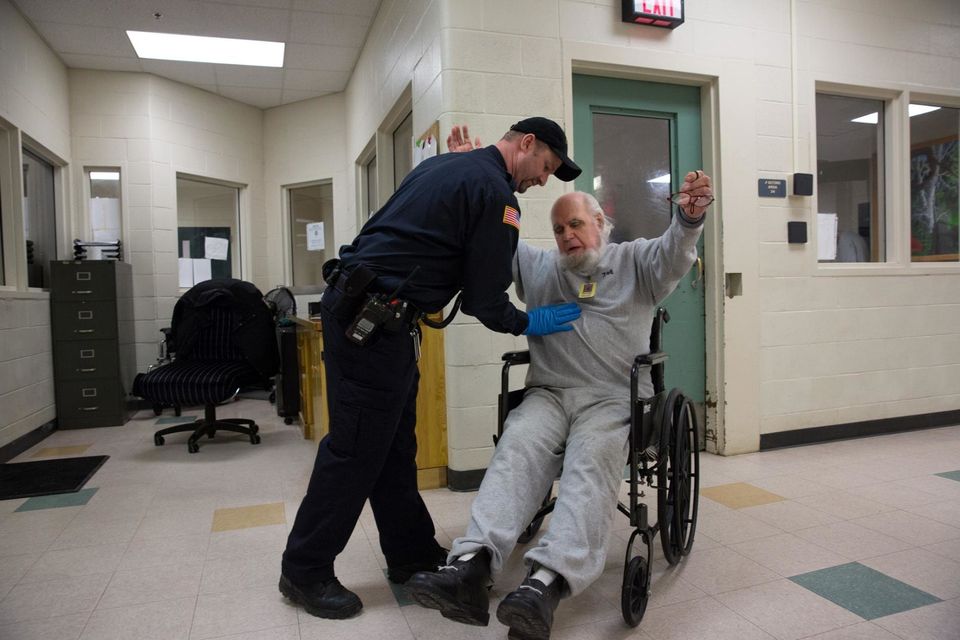 1 / 6
Albert is patted down by security as he arrives in the medical area to get a blood test. He pulls out a small piece of paper with a drawing of a pipe on it and says to the security guard, "What is this?" The guard replies, "That's a pipe!" And Albert cracks up laughing. "What's wrong with you? This is a piece of paper!"
PHOTOGRAPH BY JESSICA EARNSHAW