In November 1999, the WTO met in Seattle, where I live, to negotiate the terms of globalization.

At the time, I was negotiating a union contract. Our negotiating teams recommended rejecting a terrible contract offer. Over 98 percent of our members voted "No," leading to a 40-day strike a few weeks later.

My daughter heard about the WTO meeting from friends at school. She asked me if she could cut class with her friend Janine to go to the demonstrations. I told her three things. First, of course! This is history. You must see it. Second, here are two quarters. If you get arrested, call me and I will come get you out. (Cells phones were still a novelty.) Third, stick with Janine. No boys. For each boy you add to your group, your collective IQ drops by half - an old Dave Barry joke, but I know something about this.

I didn't understand the WTO or it's work. My feelings were captured in the movie, Battle in Seattle (great trailer) featuring Charlize Theron, Michelle Rodriquez, and Woody Harrelson. Near the end of the movie, demonstrators are in jail, asking each other if all the planning and effort had been worth it. One said, last week no one knew about the WTO. This week they still don't, but they're against it. 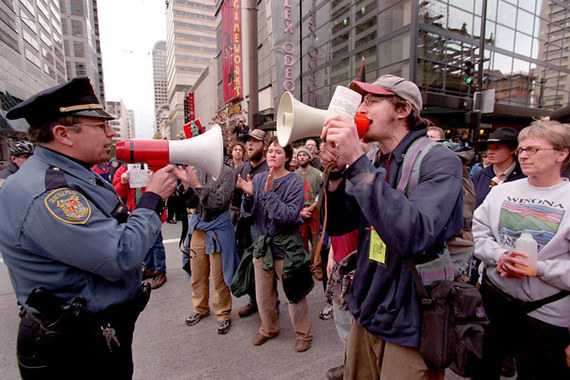 In the 15 years since, the demonstrators' message has come into focus.

A generation ago, trade deals were about trade. They were really boring, with incomprehensible names like General Agreement on Tariffs and Trade (GATT). 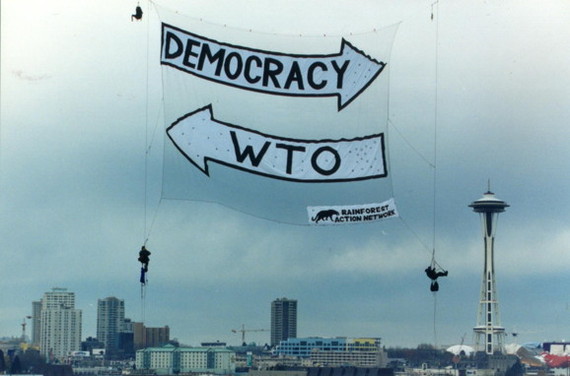 NAFTA took effect in 1994, introducing a new format for globalization. NAFTA was designed from the top down to tip power in favor of global corporations, at the expense of civil society.

The WTO met in Seattle to extend NAFTA's corporate-friendly principles to a global standard. Mass opposition in Seattle and elsewhere blocked that effort.

Globalization shifted course. Rather than seeking global consensus at the WTO, where many countries were reluctant, globalization would move forward through "bilateral" agreements. Large countries would have more bargaining power over smaller ones, and the bilateral deals would attract less attention and less opposition. We now have a jumble of hundreds of bilateral agreements.

Today, we are circling in on the global standard, with two new multi-regional agreements - one with 12 countries around the Pacific (TPP), and a second between the U.S. and Europe (TTIP). Again, the issue is not trade. It's about defining the moral, social, political and economic terms of globalization.

Looking back to 1999, it's clear that the WTO and NAFTA-style trade deals were never about economics or shared prosperity. They are really about power relationships. Who will have the power to claim any new gains created through work?

A European diplomat recently promoted this multi-regional approach, saying the global standards set in these deals would be great for global corporations. TPP and TTIP would determine how life would be organized in 2050.

Thinking back, my union contract negotiations in 1999 and the WTO demonstrations in Seattle were really two sides of the same coin. It's all about power relationships - who will decide how we divide wealth?

At a labor meeting during our strike, our International President told a large crowd that most strikes in the last 20 years were against take-aways, not for new gains. Workers struck to keep what they had.

Our strike marked a huge shift in the our power relationship, as workers. In our old relationship, our CEO had said employees were his most important asset. Our new workplace power relationship looks more like Wal-Mart's approach, adapted to our high-end manufacturing industry. In the Wal-Mart business model, every stakeholder should feel at risk, contingent and precarious. The dominant stakeholder will extract gains from all other stakeholders, then come around and demand more concessions.

Productivity would come from the global supplier network. Any work and any job could be moved to another country, either for lower cost, a weaker civil society, or simply as leverage to play one stakeholder off against another.

If that is global businesses' new business ethic, then the trade deals are creating global norms to serve that goal. This new system is working exactly the way it was designed.

In 1999, most Americans gave our trade negotiators the benefit of the doubt. The burden of proof fell on the labor and environmental protesters in Seattle and other cities. With years of lived experience since NAFTA, the jail scene in the movie looks more perceptive every day. We're not sure what the global trading system does, but we're against it.

Fifteen years on, critics of our trade policy now have the benefit of doubt. The burden of proof falls on the advocates of more NATFA-style deals.