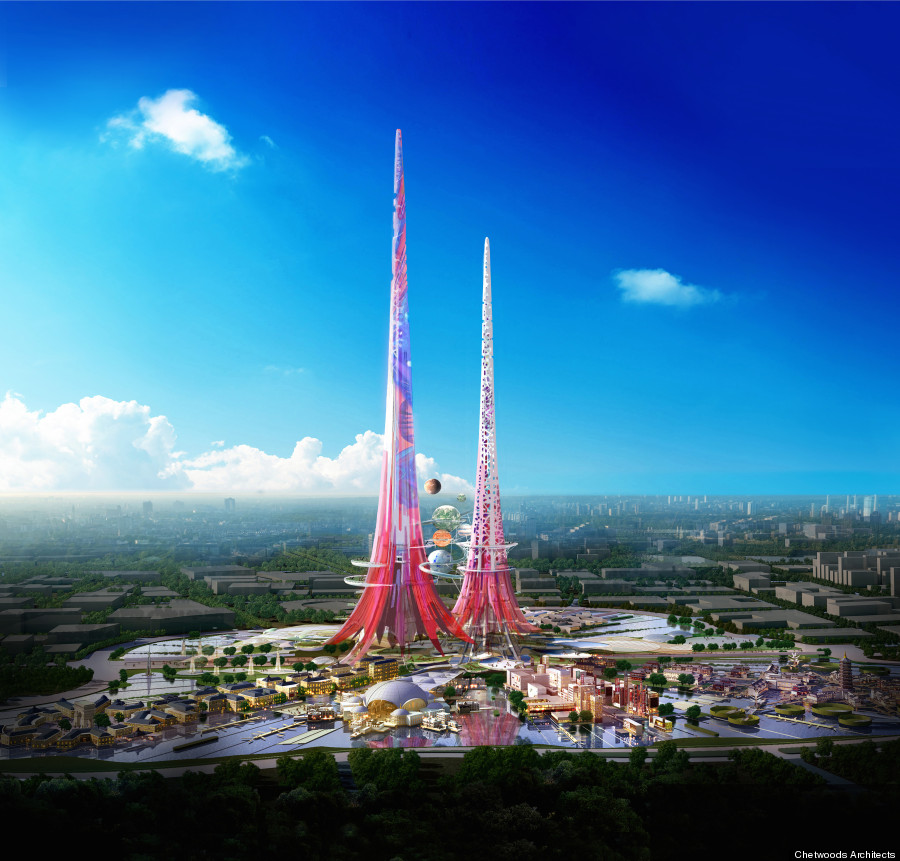 China is embarking on one of its most ambitious engineering challenges to date: the construction of the Phoenix Towers, a pair of skyscrapers in the city of Wuhan that will be the world's tallest and greenest structures.

"The use of a pair of towers reflects the dualist elements of Chinese culture in contrast to a more western monolithic form," said the towers' British builders, Chetwoods Architects, in a press release. "Based on the traditional Chinese Phoenix symbol of two birds, male Feng and Huang, the plan was generated from the Yin/Yang form to represent perfectly balanced union."

Standing at a height of 3,280 feet, the futuristic structures use sustainable technology on a massive scale. The Feng tower will have a hollow central shaft called a "thermal chimney," which takes advantage of the structure's location above one of Wuhan's many lakes. The chimney sucks up air that passes over the water and uses it to cool the tower and turn a massive turbine. This, combined with the numerous solar panels that will also cover the outside of the Feng tower, will provide electricity for both structures.

The outer walls of the Huang tower will be covered with habitats for indigenous species, as well as greenery that will clean the air. Rainwater collectors in the base of the Feng tower will also be used to provide water for residents of both towers. Together, the structures will use different but complementary technology to help offset some of the pollution that has blighted China's landscape, the firm says. 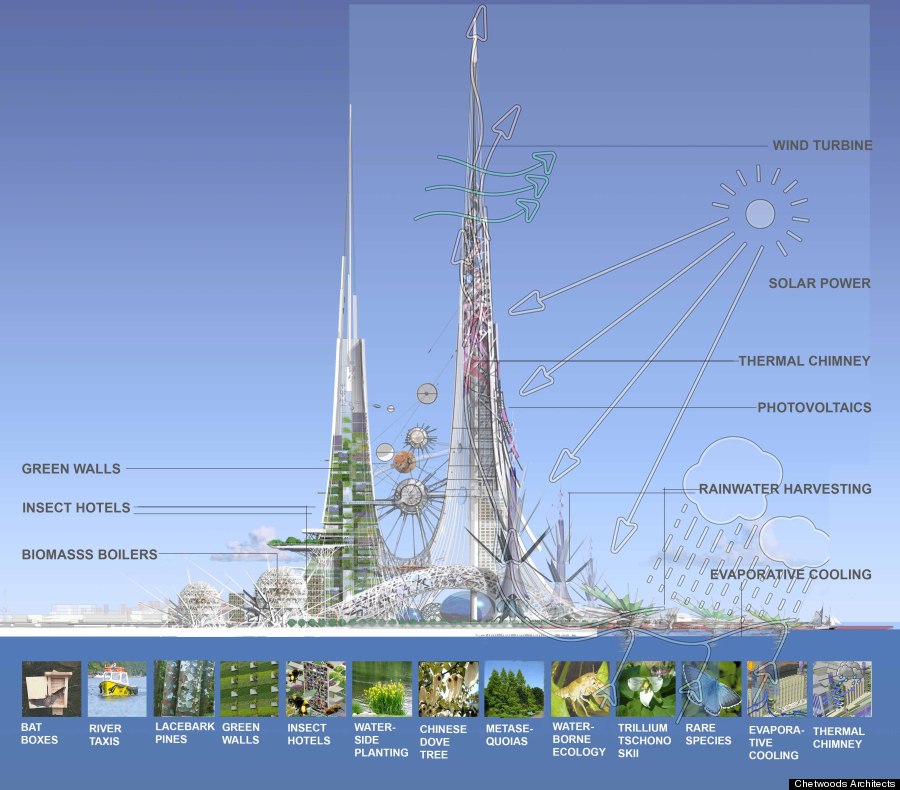 Chetwoods has three other projects in the works in Wuhan, which is the capital of Hubei province, including an enormous eco-park that will help power the rapidly-growing city that already claims more than 10 million residents. And Chetwoods' projects are not the only major green initiatives in Wuhan. Another company plans to build what will become the world's most sustainable office building.

According to CBS News, the Chinese central government has rolled out an urbanization plan that calls for moving 260 million people from the countryside and into the country's evolving megalopolises in the next seven years. China sees urbanization as its pathway to becoming a developed nation, and this plan hits fast-forward on that goal. In a conference on the future of urbanization in China, managing director and chief operating officer of the World Bank Sri Mulyani Indrawati underscored this, saying, "Globally, almost 80 percent of of GDP is generated in cities. It will be difficult for any country to reach middle-income status and beyond without getting urbanization right."

To give a sense of the scale of China's plan, if the United States wanted to relocate 260 million people, it would have to take the entire population of every state except California and Florida and move them to cities.

China doesn't tend to renovate and retrofit old buildings, instead it adds new sectors to existing cities to reach its goal of urbanization. While some new sectors are branded as "eco-cities," others do not have the environmental branding. All together, the government brands these new massive, sprawling urban areas as "super cities."

These completely new, expansive districts look like Caofeidian, an eco-city designed by the Sweco Group. Since the Chinese government has designated Wuhan an environmental "Super City," it can also anticipate wide-ranging development over the next several years. And with all that new space to be built, Wuhan will need people to fill it.

The Chinese and French governments have announced they are working together to develop Wuhan's eco-friendly infrastructure. Together, the two countries will combine their knowledge of urban planning and sustainable development to build up an eco-city that keeps a small carbon footprint while being a center of industry and culture. "The two countries both aim to build this project a model of urban sustainable development in China, France, and even the world," says a report from the government of Hubei province.

While China's optimism about Wuhan's eco-friendly future is admirable, China has had a dismal track record in terms of successfully getting people to move to their newly built districts. Most famously, an ambitious plan to expand a city in China's booming Inner Mongolia province failed in monumental fashion. Kangbashi New Area is an extension of the city of Ordos, and was built to house more than one million residents. It has been 10 years since it was first planned and constructed, but the area remains eerily empty, as shown in this report from Gizmodo. There are only 10,000 residents left to wander the city's quiet streets, and with no real incentives in place, businesses have not moved into Kangbashi, either. Much of the population remains in the older, developed part of the city, Dongsheng. All over China, millions of residences are empty, leaving areas now famously known as "ghost cities."

So why is the Chinese government following through with this plan in Wuhan, if there is such a precedent of failure? The development of eco-cities seems to be more about maintaining China's global image as a place that attempts outrageous projects, rather than the follow through. But that doesn't mean China is any less willing to keep trying. 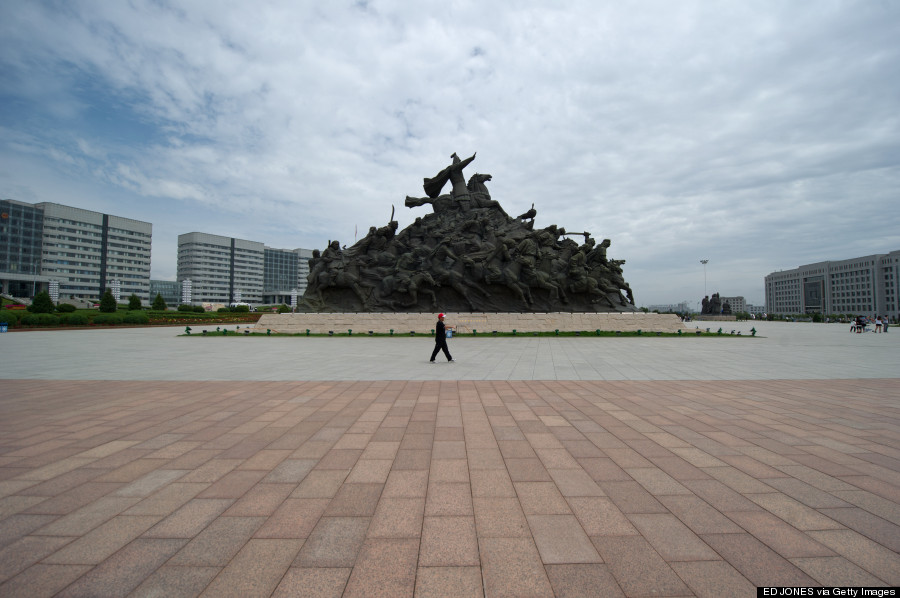 This photo from 2012 shows Genghis Khan Square in Kangbashi New Area, in the Inner Mongolian city of Ordos. The explosion of the coal mining industry in Inner Mongolia led to the rapid construction of what are now seemingly endless city blocks in Kangbashi.

While Tianjin is one of China's top 10 most populous cities, another venture to expand it -- a new central business district -- has already been unsuccessful. The city is central to China, economically and geographically, but a ghost city nonetheless is developing in its heart. Even with a shiny new downtown, there is no reason for businesses to relocate there, and at 50 kilometers from the rest of Tianjin, it remains difficult for people to reach. A report from Marketplace.org says the physical expansion of the city's central business district has seen businesses desperately selling at a loss in order to get out before their investments crash dramatically, leading to its economic contraction.

The Tianjin eco-city could be the first bit of good news, despite the failure of Tianjin's new business district. The eco-city is growing at a viable pace, and the approach to sustainability being taken could pave the way for more success in China. By using human-based design, sustainability-minded development is taking hold. Projects like Caofeidian, on the other hand, did not take into account the needs of local residents and were more about making a statement.

So what does that mean for Wuhan? China's lack of success has rightfully bred some doubts about what can feasibly be done. But the approval of the Phoenix Towers demonstrates that China has no lack of willingness to pull off a feat like this. They want to send a message to the world about their desire for dominance in everything, from the economical to the ecological. 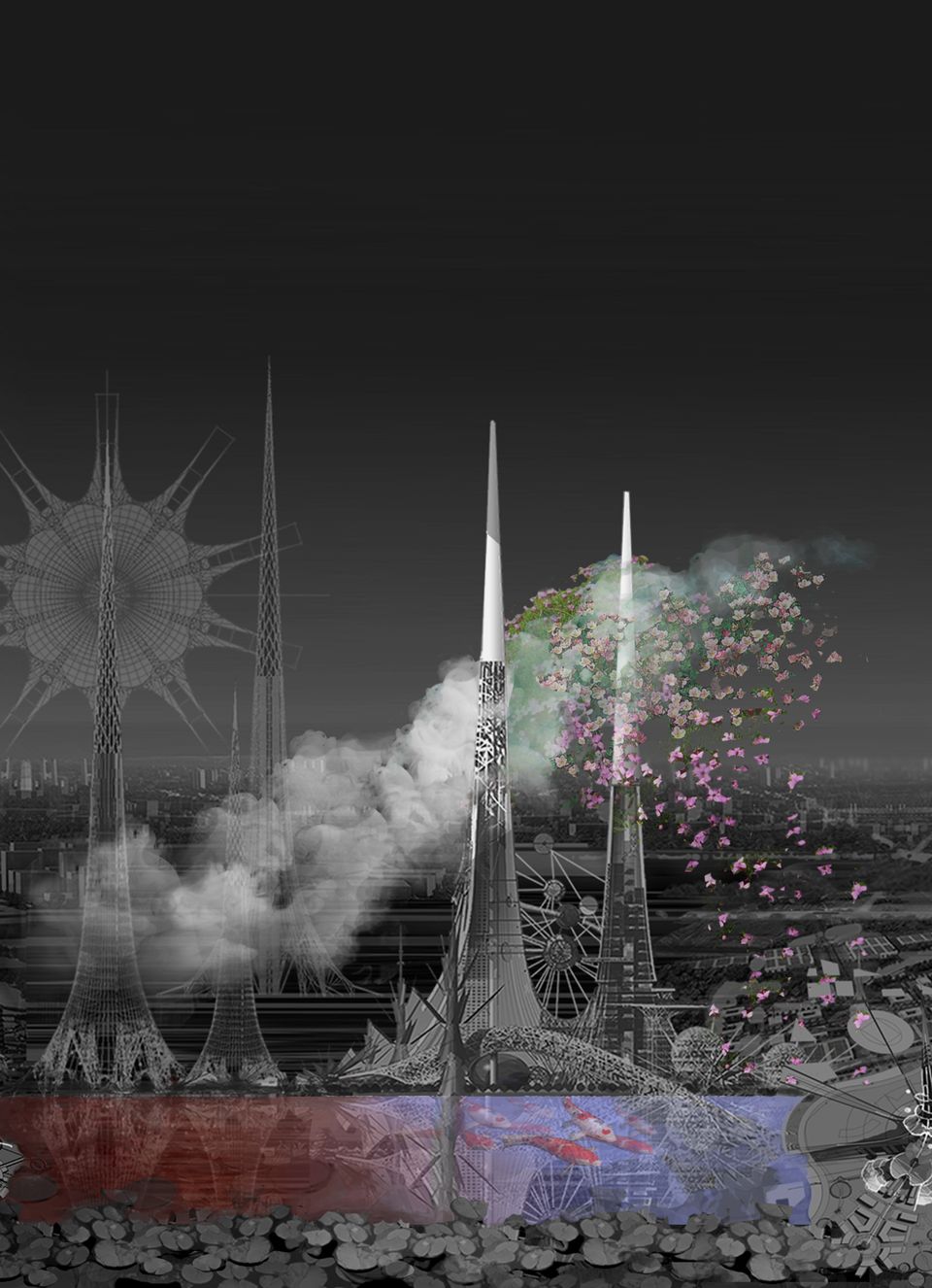 1 / 3
The Phoenix Towers will use technology on the surfaces of both towers to clean the air around Wuhan.
Chetwoods Architects