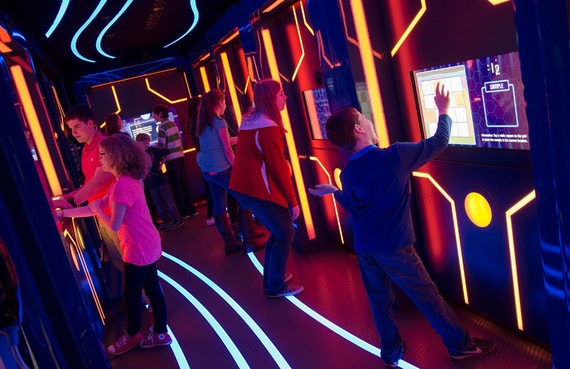 Promo image by the Clay Center

The Clay Center, West Virginia’s premiere arts and science museum for kids, recently launched a new exhibit focused on the science and wonders of fracking, thanks to hefty donations by the oil and gas industry.

The exhibit, called "Power Your Future," is housed inside a natural gas-powered truck, which enables it to be driven to local elementary and middle schools.

I tried repeatedly to get permission for a tour of the mobile exhibit, but all of my inquiries went unanswered. What I’ve been able to piece together from photographs and the testimony of those who’ve been on-board is that the interior feels like something between a spaceship and an arcade room—with strips of neon blue and orange lights covering the floor and ceiling. The walls are lined with interactive digital displays where kids can play games which relate in some way to the natural gas drilling industry.

In one game, for example, students race against the clock to connect the different elements which make up methane and other gases. In another, they can create their own music based on the seismic waves industry geologists use to identify shale deposits. A third screen, themed like the popular Facebook app Farmville, allows kids to plant trees as part of a hypothetical "fracking reclamation" project.

There’s also a station called “The Future Starring You” where kids can answer a personality quiz, take a selfie, and then get to see their picture embossed over a cartoon of a worker in the natural gas industry. One photo shows a child’s face on the head of a carton driller, next to a placard that reads "Drill here."

To be clear, there are no digital games on-board the exhibit that help children learn about the scientifically confirmed dangers of fracking—like say, the proven spikes in earthquakes,climate-warming methane leaks, or cancer-causing radon. 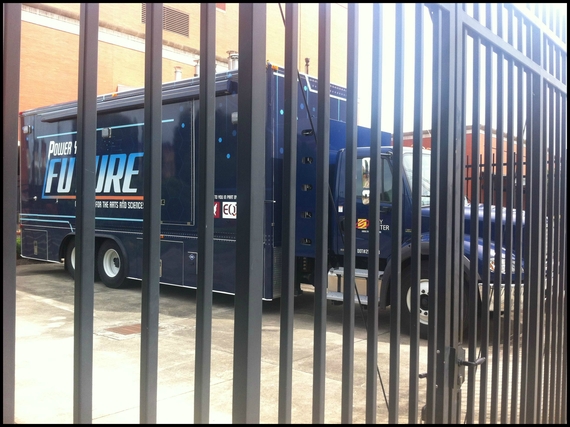 When not being driven to local elementary and middle schools, the Clay Center's pro-fracking exhibit is usually parked in the museum's back lot, closed to the public.

The Power Your Future exhibit was paid for with $1.2 million in grants donated by EQT Corporation and Energy Corporation of America, two very wealthy gas companies whose logos are emblazoned on the side of the truck.

When critiqued for taking gas money and just showing one side of fracking story, Lloyd Jackson, the chair of the Clay Center’s board defended their "balanced and fact-based educational programming." Jackson went on to laud fracking, saying, "Natural gas is and will be a central issue for our State and our counties for decades" and that "we can expect the gas industry to be around for a long time.” Jackson was also very defensive about the exhibit’s sponsors, extolling EQT and ECA for their “commitment to our community [and the] betterment of our children."

It might be important to know that Lloyd Jackson, in addition to chairing the museum board, is the President of Jackson Gas Company, his family’s gas drilling and production business.

The President of the Clay Center, Al Najjar also defended the exhibit by stressing its focus on science-based learning. Najjar told the Charleston Gazette, the way the museum staff addresses the controversy surrounding fracking, "is by talking about it" and "not shouting and screaming about it." He said, "It’s really about making sure we are getting students to understand how it works, to literally talk about the science."

Najjar’s logic that the way you address concerns surrounding fracking is by zeroing in on the science seems like a line you’d expect to hear from a gas company’s PR representative.

After all, this is the same logic that says that the way to discuss benzene, a chemical that's known to cause cancer in humans and is sometimes used in fracking injection fluids, is by only discussing its chemical composition. As it happens, benzene's molecular composition is C6H6, a rather elegant hydrocarbon design. The form of cancer benzene is most known to create is leukemia.

While the Clay Center claims they give lesson plans to teachers that address some of the larger questions surrounding the gas industry as well as other forms of energy, one wonders why some of these areas of deeper concern were not featured in the exhibit itself?

One also wonders why the Clay Center decided not to highlight the stories of fracking’s impacts on West Virginians. It seems especially ironic when you find out that the Center runs a concurrent exhibit for kids called "What’s Your Story?"

The stories of fracking’s harmful impacts are plentiful in the mountain state.

Eileen Burke, an art teacher for 16 years at Doddridge County High School in West Virginia, in a county where fracking is well underway, heard multiple "horror stories" from her students. Some students would tell her how they couldn’t shower because of how "dark and nasty" their water had become and one girl described how her family was "driven crazy with the noise of two drilling rigs near her home, and the bright lights on the pads—how it’s like daylight at night."

Other students would fear just getting to school as their school bus would compete with fracking equipment and water trucks on narrow mountain roads.

Eileen herself couldn’t take the stress of having EQT’s fracking wells across from her property. After years of waking up with "metallic coughing," endless rainy nights worrying about flooding from nearby waste water ponds, and endless truck traffic outside her house, she sold the home she hoped to retire in, and is moving out of state. 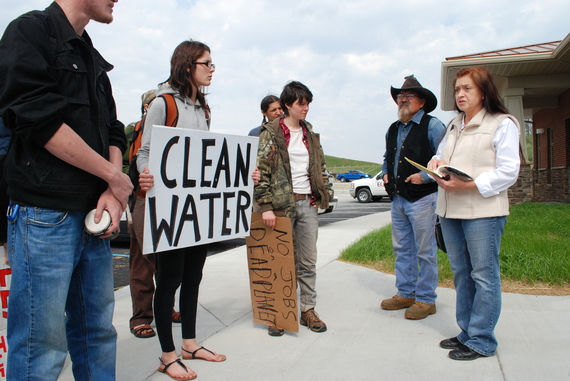 Photo of Eileen Burke and her husband trying to get answers at EQT's Bridgeport offices back in 2012. Read the story here.

Another Doddridge County resident, Tina Del Prete, recently started a petition on MoveOn.org calling on West Virginia to follow New York’s lead and ban fracking. The petition has gathered over 2,650 names - with many West Virginians sharing their story alongside their signature.

One recent comment reads: "As a native West Virginian, I would most prefer to raise my two children in the land of their heritage and history. But, we had to leave W VA last year with a lack of confidence that we were safe drinking our tap water, breathing clean air, or if we were literally on stable ground."

This past April, EQT sued 103 West Virginian landowners so they could trespass their land to pursue its proposed Mountain Valley Pipeline. Many of these landowners continue to protest, bringing their stories of protecting their heritage and their children’s future to bear.

And in 2004, EQT’s contractor bulldozed a historical cemetery of black coal miners in Logan County in order to move fresh pipe to a drilling site quicker. Their descendents’ stories of seeking justice continue to go unheeded.

Why Not Focus on Renewables? 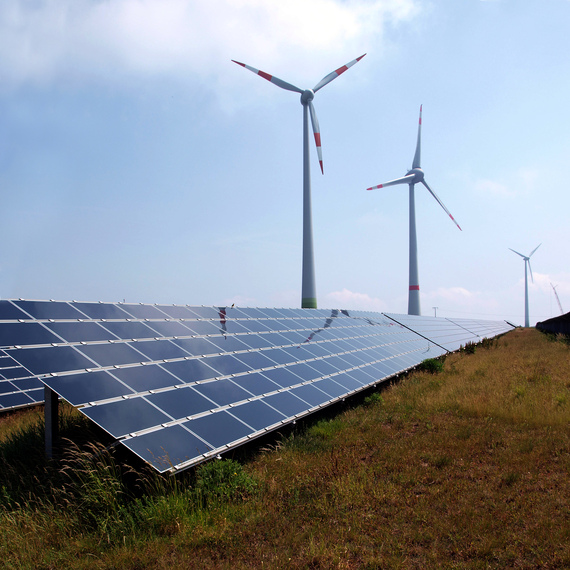 One of the obvious questions that comes up in discussions of the Clay Center’s pro-fracking exhibit is: Why not create an exhibit for children that focuses on renewables? Why not spotlight the energy sources of the future - like wind and solar? Such sources of power are far safer and don’t come with flares and fireballs, water contamination, metallic coughing, dangerous roads, intolerable noise and night light, worsening climate change, and the perils of another boom and bust economy. Plenty of science goes into photovoltaics and converting wind turbines’ kinetic energy into electricity.

Well, apparently, a few years ago the Clay Center asked themselves this very same question.

I spoke with an ex-Clay Center staffer who told me that at the inception point of the mobile exhibit – back when it was still an idea on a drawing board a few years ago, the hope was that it would focus on all kinds of energy – from coal to gas to renewables like solar and wind. This ex-staffer, who wished to remain anonymous, told me they weren’t sure what happened, but that a moment came pretty quick in the brainstorming process where the museum curators decided to double down on gas.

One could guess that ECA and EQT’s money had something to do with it.